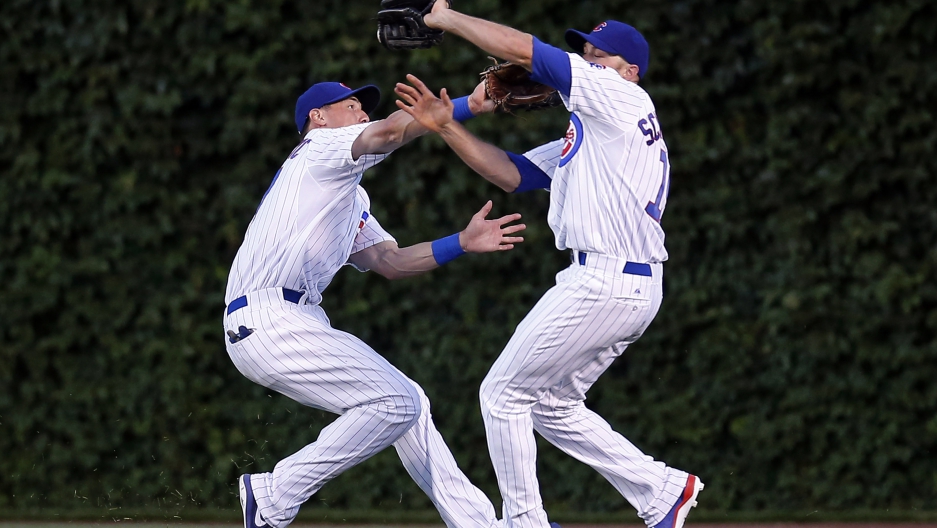 My grandfather was a quiet, patient, and peaceful man.

The father of four daughters, he farmed 100-plus acres of northern Indiana for more than 60 years. He could barely bring himself to chase away groundhogs by firing his rusty shotgun into the air.

He played golf without getting angry. Ever.

But the Cubs? They could make my grandfather’s Quaker blood boil. He was the epitome of the oft-mentioned, seldom-soothed “long-suffering Cubs fan.”

One of my first memories is being five years old, riding on his lap as he let me steer the tractor around the farm. Above the din of the engine, you could always just make out the call of the Cubs game on a portable transistor radio. He must have listened to hundreds of day games from Wrigley as he worked. That little radio went everywhere with him.

His support for the Cubs was one of those unquestionable, tortuous givens of the universe. Like mosquitoes, or broccoli. The farm was roughly equidistant from both Chicago and St. Louis. He could have easily been a Cardinals fan. But that was simply unthinkable.

And so, that little transistor radio was always tuned to WGN, home of the Cubbies. More often than not, it brought bad news, writ small and large.

He tried not to show how angry the Cubs made him.

He had given up smoking by the time I knew him, but he always had a toothpick in his mouth. As the Cubs found yet another way to snatch defeat from the jaws of victory, he’d work that toothpick until it was mush. Then he’d spit it out, mutter something that sounded suspiciously like “Goddammit” under his breath, and grab another from his pocket. By the end of the summer, that man’s jaw must have been ready to crack under the strain.

Only a couple of times do I remember him suddenly picking up the radio, rearing back like Cubs pitcher Rick Sutcliffe, and threatening to throw it out into the cornfield and then run over it with the plow. Twice.

He always stopped himself. Somehow, that little transistor radio lasted for years.

After he retired from farming, even after he had a debilitating stroke, my grandfather would faithfully tune in to Cubs games. We spent many an afternoon sitting around the radio, or in front of the television, waiting for the team to find what he always called “a new way to lose.”

I learned a lot of valuable things from that time together with him.

“The Cubs are a lesson in the power of mediocrity,” he’d tell me, voice dripping with disgust. “Why should they ever strive for greatness when bums like us still listen, still fill those bleachers at Wrigley, game after game?”

My grandfather passed away in the summer of 1995, right in the middle of a typically “hapless” (another word bandied about frequently with this team) Cubs campaign. They ended up with a 73-71 record that year, finishing a solidly mediocre third in the National League Central.

Soon after, I ended up in Boston, another place where, at that time, generations of disappointed baseball fans spoke of curses, hated rivals and missed chances. Needless to say, it all felt very familiar. I could suffer in two leagues now, not just one!

Then, in 2003, the Cubs made a real run. They went up three games to one on the Marlins in the National League Championship Series. My world no longer made sense. Even my grandfather, I thought, might be forced to concede they were a decent team.

And then Steve Bartman interfered with that fly ball in the Wrigley stands, and the universe fell back into a familiar place. I thought about how many toothpicks my grandfather would’ve gone through in those terrifying innings after the “infamous” Bartman incident.

I could hear his voice in my head.

“The real curse,” he’d say, “is not about billy goats or Steve Bartman. The real Cubs curse is the curse of mediocrity.”

“The best thing to do ... is just stop watching them.”

So, I focused my pain and suffering. I quit the Cubs, and concentrated my misery on the Red Sox. They promptly broke the Curse of the Bambino, winning the 2004 World Series, beating both the New York Yankees and the St. Louis Cardinals in the process.

Then the Red Sox won again. And then again.

I was thinking about all of this last night when I happened into a bar that was showing the Cubs game against the St. Louis Cardinals. There were televisions everywhere, which meant I couldn’t help but glance, more than occasionally.

As I watched, the Cubs quickly began to issue walks and give up seeing-eye singles. By the time I finished my beer, the game was tied.

That’s when I realized I had a toothpick clutched between my teeth, gnashing away, and muttering “Goddammit” at five televisions.

I stopped watching. I got up and left.

Without my eyes on them, the Cubs managed to win that game, and they are now headed for the NLCS once again.

And the fact that they beat the Cardinals, arguably the best team in baseball this year, to get there? That makes the victory extra sweet, of course.

I’d like to think that somewhere my grandfather is smiling.

Grudgingly, he might admit: “OK, maybe the Cubs have cultivated a slightly elevated form of mediocrity this year.”

The truth is this: One way or another, all of us bums will be back for more next year. Winners or losers, the Cubs will always be lovable.

I’m going to go buy a pack of toothpicks tonight.