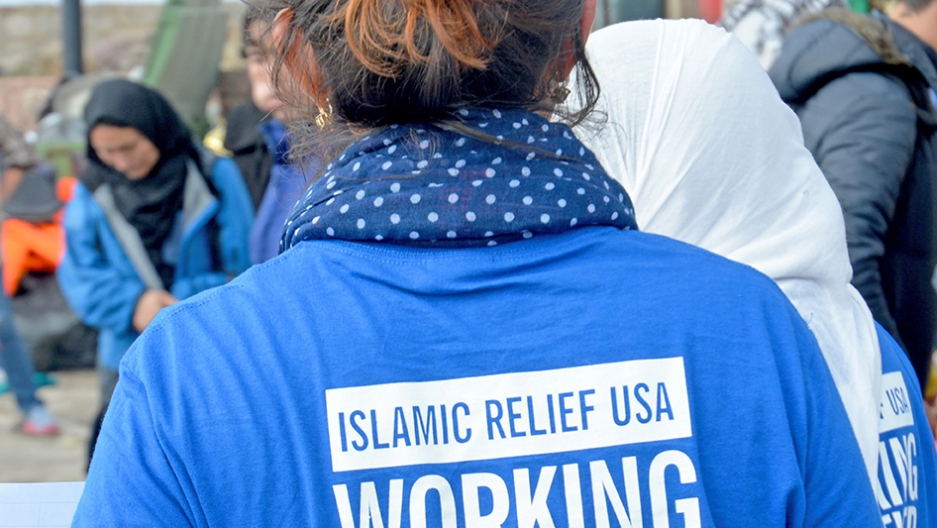 Among the massive crew of local and international volunteers who tend to the daily arrival of thousands of refugees to the shores of Lesbos, some of them were once refugees themselves.

“I’m here to help the refugees. I am a refugee also,” Rihab Aslami tells me. “When I arrived to the United States I was happy and I want to make them happy.”

We are sitting by the port of Molyvos at the Seahorse Hotel on a sunny morning where Rihab and the other volunteers from Islamic Relief USA are staying. I didn’t know it at the time, but I had caught Rihab, a 58-year-old mother of four who lives in the Bay Area, in a rare moment of stillness. Soon a Greek Coast Guard ship would arrive with 150 refugees that they had rescued at sea trying to make the crossing from Turkey and she and the other volunteers would jump into action that would last all day.

Rihab and her husband fled Iraq in the late 80s. Persecuted by the Saddam Hussein regime, her husband was unable to work as a journalist. After many travails they finally managed to reach the United States in 1992, where he “achieved his dream” and started an Arabic — English newspaper. Sadly, he died not long after.

Another Islamic Relief volunteer, Fahima Rakmansi, turns to Rihab and smiles, “She’s like my mother. She’s always telling me to eat cheese because it’s good for me.” Fahima came to the Bay Area from Afghanistan after her mother left with Fahima and her siblings after the Soviet invasion. Like Rihab, she is full of smiles, but grows briefly teary when she remembers escaping Afghanistan as a girl and finally reaching the safety of Pakistan. “I closed my eyes. It was so quiet … all I could hear was people’s voices. That’s when I realized — I don’t hear bombs exploding. I don’t hear kids crying.”

Word spreads quickly through the port that refugees are on the way. Many of the aid groups and volunteers are connected through a WhatsApp group that participants use to inform each other of the latest developments. One of the many immense challenges of dealing with the crisis is that people never know exactly where the boats will come in or when.

Fahima and Rihab jump up and run to the stone pier lined with colorful wooden fishing boats with a milky patina from the sea air. The Coast Guard has ferried in the first 75 refugees from the larger vessel anchored offshore. Since they were rescued they must be immediately registered.

They join other volunteers from the Netherlands and Denmark and Australia and I don’t know where else in going through a routine they’ve performed many times, taking each person’s name and then ushering them to an area near some fishing nets where dry clothing and cheese sandwiches are offered. The refugees walk past seafood restaurants where many menus also appear in Arabic and free WiFi is offered to meet buses that will carry them to Mytilene, the capital.

Rihab is a very fit woman who wears jeans, tennis shoes, a blue Islamic Relief t-shirt, and a white hijab that shows off her round face and bright brown eyes. She rushes past in a girlish gallop. “Not now,” she says, when I try to interview her some more. “I have to get my cellphone so a refugee woman can call home and tell her family she is OK.”

Rihab speaks Arabic and Fahima speaks Farsi so they offer comfort to Syrian, Iraqi and Afghan refugees in the chaotic moments when the overloaded boats hit the beach and lots of well-meaning volunteers rush down to help and the media puts their lens in their faces.

“When the Afghanis get off the boat they are confused, they don’t know if they are going to get sent back or what. Afghans can’t believe that there’s someone who speaks their language,” Fahima says.  “There’s a word for it in Farsi. They call me their representative. They thank me a 1,000 times.”

They also hear countless stories. To meet the refugees who arrive to Lesbos is to meet the conflicts in the countries they come from and the very difficult personal situations they engender for citizens of all walks of life. Fahima tells me about a young father who worked for an American company in Kabul who had his hand cut off by the Taliban, his left hand, specifically because he was left handed. She tells me other stories but we both know they don’t have the same power in the recounting. “They are all searching for a better life.”

Fahima counsels the Afghans that they did the right thing in coming. “Take the opportunity. I’m like, don’t lose that. Take it, study, get educated — then come help the people.”

“It’s so amazing here in here,” she tells them about the island where they landed. “I see people from here and from Denmark, UK, all around Europe. It’s beautiful. Some of them are just on vacation. They spend their own money living here and they don’t even have jobs.”

“I tell them, these people are here day and night in your service helping you. Take that help and then do the same thing.”