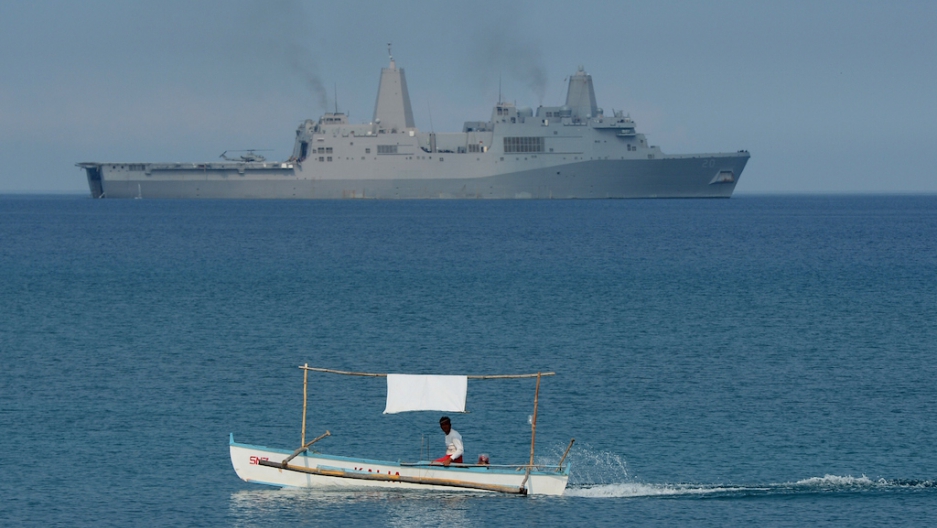 A Filipino fisherman in front of the USS Green Bay during a landing exercise on a beach in Zambales province on April 21, 2015, as part of annual Philippine-US joint maneuvers some 137 miles east of the disputed Scarborough Shoal in the South China Sea.
Credit: TED ALJIBE
Share

BANGKOK, Thailand — China’s push to build military outposts on island specks in the South China Sea is one of Asia’s worst-kept secrets.

In this turquoise expanse — a channel for one-third of the world’s shipping — China is busy installing airstrips, radar towers and a hangar fit for fighter jets.

Few accept China’s official explanation that these outposts are primarily for humdrum tasks such as scanning weather. Nor are the five other nations that claim parts of the sea content with Beijing’s insistence that the waters are China’s “blue national soil.”

But China’s commitment to defending these fledgling outposts will be tested by a nation more than 7,000 miles away.

That would be the US.

After repeatedly warning China to stop militarizing the sea, the Pentagon is poised to deploy warships extremely close to these remote islands in a show of force.

US officials told the Wall Street Journal earlier this month it was a “matter of time” and informed the Financial Times that patrols would happen “in the next two weeks.”

Well, looks like it's time now. A US defense official told Reuters on Monday that a Navy ship will venture within 12 nautical miles of the islands by Tuesday.

It’s a provocative move by the American military, to say the least.

It will positively enrage Chinese officials, who previously told GlobalPost the sea has been China’s domain since “ancient times.” The deployment also risks a clash, however unlikely, between the world’s largest navies.

Though parts of the sea are also claimed by Vietnam, the Philippines and others, China has vowed to defend the waters against what it calls “acts of invasion.”

“We hope the United States can look upon the current situation of the South China Sea from an objective and fair perspective and play a constructive role together with China in keeping the peace and stability in the South China Sea,” Hua Chunying, a spokesperson for the Chinese foreign ministry, stated in response to Washington’s signals that it is readying its warships.

China’s state-run outlet the Global Times has run a rash of less diplomatic editorials over the past year warning against American intervention. One reads: “It is a painful reality that the US has left too many places in chaos after it stepped in, as people are witnessing now in Iraq, Syria and Libya.

“The South China Sea should not be the next one.”

Yet another op-ed warns that “if the US wants to teach China a lesson by provoking and humiliating ... China will have no choice but to engage.”

The bluster on both sides is remarkable considering how little actual land is at stake. The few islands peeking above the South China Sea’s waters are little crumbs baking under a tropical sun.

China’s largest claimed island is roughly half the size of New York’s Central Park. The second largest is smaller than Beijing’s Forbidden City. The largest town is a barely inhabited speck with a population hovering around 1,000.

Yet the stakes are huge.

Nearly a third of the world’s crude oil and half of its gas exports are shipped through the sea and much of it is bound for fuel-thirsty China. Even more fossil fuel lies beneath the sea: untapped oil reserves equivalent to 12 billion barrels, according to US estimates.

Multiple nations are jostling to block off parts of the seabed believed to be rich in oil. But just as 19th-century America forcefully sought dominion over the Caribbean, China seeks supremacy over its aquatic backyard.

Until now, the closest the US military has come to the hot spot is in a spy plane that flew over disputed areas in May. That “error,” as Beijing called it, prompted China to lodge a formal complaint.

Beijing makes it clear that any US vessel deployed within 12 nautical miles of its militarized islands will be deemed a serious intrusion of its territory.

But breaching that 12-mile perimeter — drawn from global sea law set by the United Nations — is exactly what the US military intends to do.

The odds of two economically interdependent powers doing battle over these islands is hard to imagine. A top Philippine diplomat and maritime security expert, Henry Bensurto Jr., previously told GlobalPost that this scenario amounts to “a very good plot in a very good movie ... but it’s not reality.”

Still, the last time the US military neared these nascent island bases from the air, China’s state-backed press warned the US of a “dangerous outcome.”

“If the US sets its bottom line on the condition that China must stop its construction work,” wrote the Global Times then, “military confrontation will start sooner or later.”