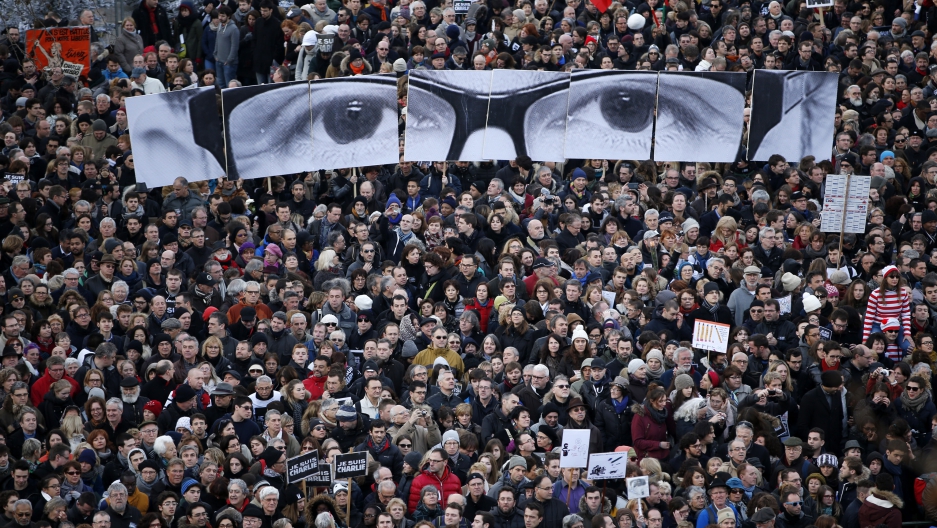 Hundreds of thousands of French citizens remembered the late Charlie Hebdo editor Stephane Charbonnier, known as "Charb." The massacre of 11 people at the newspaper January 2015 provoked an outpouring of support, both emotionally and financially.

The killers were angered by the satirical magazine's cartoons depicting the Prophet Muhammad.

Immediately after, there was a worldwide outpouring of support for the magazine. People who had barely heard of Charlie Hebdo wore "Je suis Charlie" badges. Donations and subscriptions also poured in. The magazine has become one of the wealthiest papers in France, says the BBC's Lucy Williamson in Paris.

The tragedy brought the remaining staff members together. There was a real determination to keep going, adds Williamson.

Nine months in, it's a very different picture.

Two long-time and high-profile figures at the paper have announced their resignations. One of them, Luz, is the paper's senior cartoonist, who designed the cover just after the attacks. "Luz has said he won't draw the Prophet Muhammad anymore, because he was no longer inspired by him." Columnist Patrick Pelloux will leave at the end of the year.

There have been squabbles about what to do with the money.

"The idea of who controls that money, who decides how much goes the victim's families, how much goes to the paper," explains Williamson. "It's a perfect storm."

After the massacre, Charlie Hebdo's staff worked out of the offices at Liberation. But they've recently moved into new offices.

But staff members are still on edge. "They're not free to come and go as they want," Williamson says. "Even at home, they never open their curtains. They live in the dark because they’re afraid of becoming targets."

For now, Charlie Hebdo will continue, says Williamson, because it's financially secure. But some people feel it's been fundamentally changed. "The old hierarchy, the camaraderie, the old naiveté, the innocence is gone."