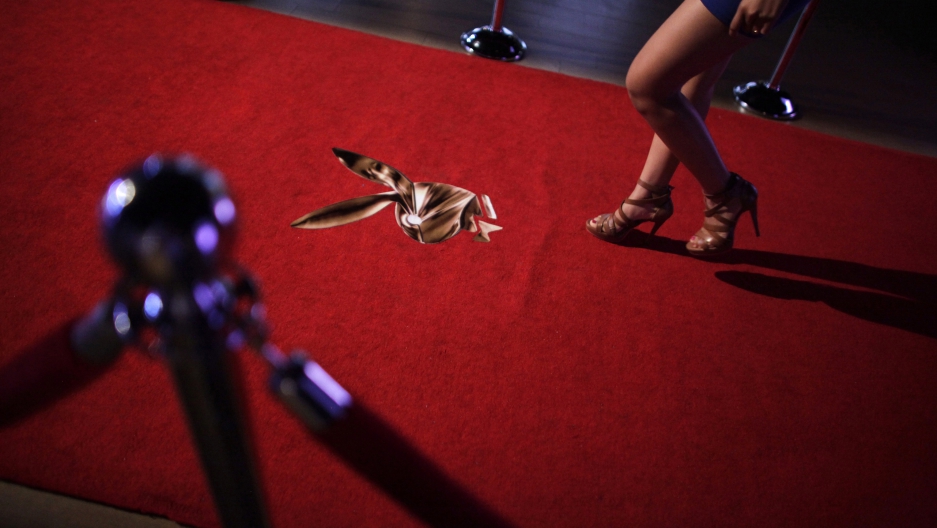 A young woman walks towards a stage to be photographed while applying for a job as a Playboy bunny during a casting in Monterrey August 7, 2013.

Who reads the fine print anyway in Playboy?

Behind the announcement that the magazine was ditching images of naked women was a caveat: Only in America.

International versions of Playboy can keep the nude images, the company told PRI late Tuesday. They are published by local licensees that create region-specific content. Said one spokewoman: "We expect some editions will continue publishing nude pictorials if it makes sense in their market, and others to follow our lead and move forward with a non-nude edition."

In places like China, the nude pictures were never the issue. The magazine is banned there, and the brand makes its money elsewhere.

"In China, Playboy is better known for it's line of bath products," says New York Times reporter Ravi Somaiya. "Forty percent of of their sales come from China, despite the fact that no magazine is published there. It gives you an idea of how strong the brand is."

"Last year we re-launched Playboy.com as a safe-for-work site and discovered something about our readers and our identity: The Bunny transcends nudity. Tens of millions of readers come to our non-nude website and app every month for, yes, photos of beautiful women, but also for articles and videos from our humor, sex and culture, style, nightlife, entertainment and video game sections. We are, and always have been, “entertainment for men” – with award-winning journalism and fiction to boot. Playboy is a cultural arbiter of beauty, taste, opinion, humor and style."

Somaiya says the move puts them more in line with other magazines like Adult and Louie.

"They're more neutral in which genders they appeal to and they celebrate all forms of decadence," he says.