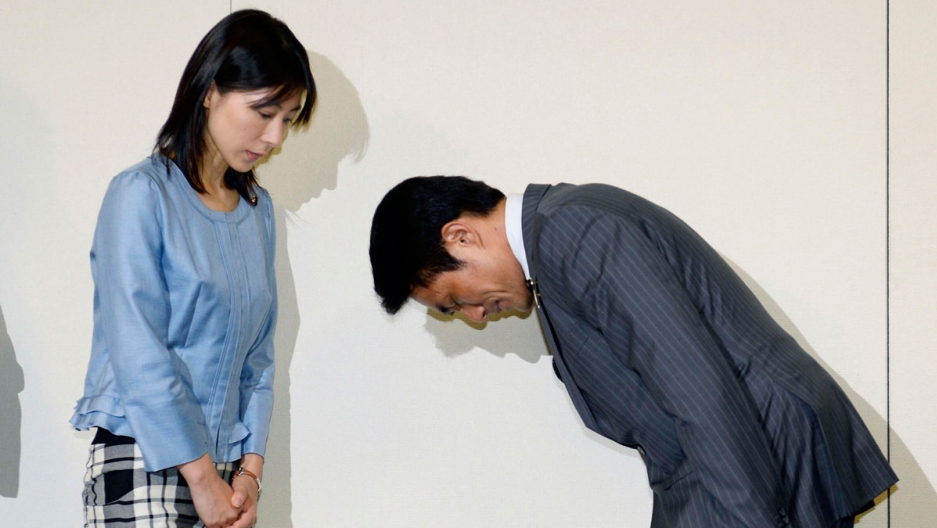 Tokyo city assembly lawmaker Akihiro Suzuki bows to apologize to lawmaker Ayaka Shiomura at Tokyo Metropolitan City Hall, June 2014. The lawmaker from Japan's ruling party apologized for telling Shiomura to "hurry up and get married." Little, however, has been done to tackle rampant sexism in Japanese politics, and Suzuki was recently reinstated by his party.

It wasn't until she studied abroad that Ayaka Shiomura learned to speak out.

“I was the kind of girl you wouldn't know if I were there or not. I didn’t assert myself at all.”

Since coming back, people often tell the Japanese politician: “You’re really strong. You stand your ground.”

In Japanese politics, that's not always a good thing. Particularly if you are a woman.

Shiomura, who attended junior college in Japan and had a brief entertainment career, went on to became a scriptwriter for TV and radio. At one point she worked on a radio show with a segment on politics, and there she started to meet and talk to politicians. And she realized that if she wanted better policies for the issues she cared about, she would have to run.

In 2013 she was elected to the Tokyo Municipal Assembly from an upstart opposition party.

Her job was difficult from the beginning: “Because I’m first term, because I’m young, because I’m a woman … from a lot of perspectives, there’s still a lot of prejudice and discrimination in the Assembly. And especially as a young woman, I’m taken lightly. And I don’t feel respected.”

In June 2014 Shiomura addressed the assembly for the first time.

She spoke about the need for the Tokyo government to do more to support working women who have or want to have kids — in order to bring up the country’s low birthrate.

In the middle of her comments, members of Prime Minister Shinzo Abe’s ruling party started heckling her with taunts of, “Wouldn't it be better if you just hurried up and got married?” and “Maybe you can’t have babies.”

On TV, viewers saw a shaken Shiomura start to lose her composure, quickly finish and dab her eyes. Heckling and even sexual harassment is not uncommon in the Tokyo Assembly, Japanese politics, or Japan. In fact, in a recent survey of local female politicians across the Japan, more than half said they had been sexually harassed on the job.

But Shiomura did something unusual. She asked the Assembly to identify and punish those responsible. They wouldn’t. And the issue blew up in international and then Japanese media.

Some pointed to Shiomura’s past, when she had hosted a late-night TV show wearing only a bathing suit, saying that kind of a woman deserved disrespect. But most public reaction toward the hecklers was harsh.

Finally one politician claimed responsibility and apologized on national TV. Commentators asked if this were a watershed moment. To see the ‘mighty’ ruling party bow before such a young and female politician. But no others came forward, and the Assembly voted down a call to identify the rest.

Lawmakers created a commission to look into gender discrimination in the Assembly. But that commission hasn’t produced anything yet. And now, one year on, it’s as if nothing happened —almost. The politician who apologized was recently reinstated to the party.

But Shiomura has been ostracized by everyone in the Assembly. Not a single legislator will work with her. “It's kind of like what you see in elementary school… Some people have told me in secret that if they’re seen talking to me, they will be treated badly.”

She is seen as the one who caused problems, who made a big fuss over nothing. Shiomura says that overall the message is, “If a woman stands out, do you see what‘ll happen?”

Hiroshi Shigihara with the majority party in the Tokyo Assembly denies that Shiomura is being treated this way. He says the party treats each lawmaker equally — and they each have the opportunity to speak. He also says the ruling party doesn’t need to address issues of sexism because the Assembly is already taking of care it in the commission on gender equality — the very same commission whose leader also had to apologize last fall for making sexist remarks.

And it’s also the very same party that has been backing a plan called “Womenomics” that’s supposed to push for more equality — in society and government.

So maybe it’s not surprising that Shiomura and others question the ruling party’s ability to change… and their sincerity. Right now, Japan has the lowest representation of women in politics in the developed world.

To professor Mikiko Eto, who studies women and politics, the answer is clear: “Quotas are the best way to increase women’s representation in Japan.” Shiomura agrees.

A few token women by themselves don’t necessarily mean better policies for women.  After all, Eto points out, Prime Minister Abe put strong anti-feminist female politicians in both his previous Cabinet and his newly announced one. But over time she says the more women that are involved, the better the atmosphere and policies will get.

Recently some lawmakers in the Diet, Japan’s parliament, put forward a non-binding plan that would introduce a quota for female candidates. But Eto says that kind of legislation, with Abe's Liberal Democrats in power, is basically dead in the water. "They’re completely against it.”

And Abe's party has only lost power twice — briefly both times — since World War II.

Since the heckling incident, Shiomura has been implicated in minor scandals. But political scientists also say that they’re the kind of thing no one would have cared about were she not female and under such intense scrutiny.

There’s a lot Shiomura still wants to accomplish in her job, but she says, “There is a limit to how much I can fight against something so big.”