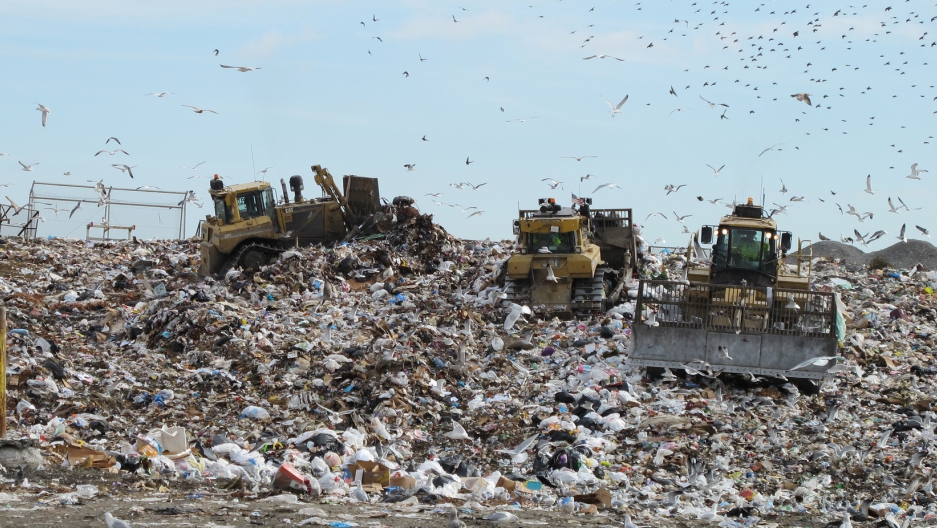 The Old Dominion landfill in Virginia.

Americans dumped 262 million tonnes of municipal trash into landfills in 2012, according to a new study published recently in Nature Climate Change. That's more than double the EPA estimate for that same year.

“That’s metric tonnes,” says engineer Jon Powell, an author on the study, “If we're thinking US short tons, it's about 289 million tons.”

Powell tallied up his numbers on trash using census data, Department of Commerce data and other business activity information. He also set out to estimate the amount of methane — a noxious greenhouse gas — generated by Americans’ waste.

Stinky trash decomposing in landfills is full of organic material being broken down by bacteria. This decomposition creates methane. The EPA requires landfills of a certain size to put in engineered systems to capture and destroy the methane. However, according to Powell, the systems aren’t always performing as well as they could.

“That difference that we found between sites that are closed and sites that are open was about 17 percentage points. So essentially what that number tells us is that there's some extra room for us to improve the way that we're collecting gas at our open sites,” Powell says, adding, “Let's say a site is generating 2,000 cubic feet of landfill gas every minute. If we're only collecting ... 50 percent, we're leaving about 2.5 megawatts of electricity equivalents really on the table.”

Landfills get a bad rap, but Robin Nagle from the New York City Department of Sanitation, and author of the book “Picking Up,” says landfills should be more celebrated.

“If we still had open dumps, cities would be very difficult places to live,” Nagle says. “[The invention of landfills] was a revolutionary change, although not one that's generally celebrated. Although it should be.”

A little known fact of American’s relationship with trash, is how many of our cities are built on top of landfill.

“We built a lot of [New York] city on top of garbage. Quite literally. Approximately 20 percent of the larger metropolitan region is built on fill,” Nagle says, adding, “[That's] fully 33 percent of Manhattan south of 14th Street. So we're walking on trash pretty much every day.”

“Sanitation is, in my very strongly argued opinion, the most important uniformed force on the streets of the city,” Nagle adds. “If sanitation is not there, we don't really have a city that we can live in.”