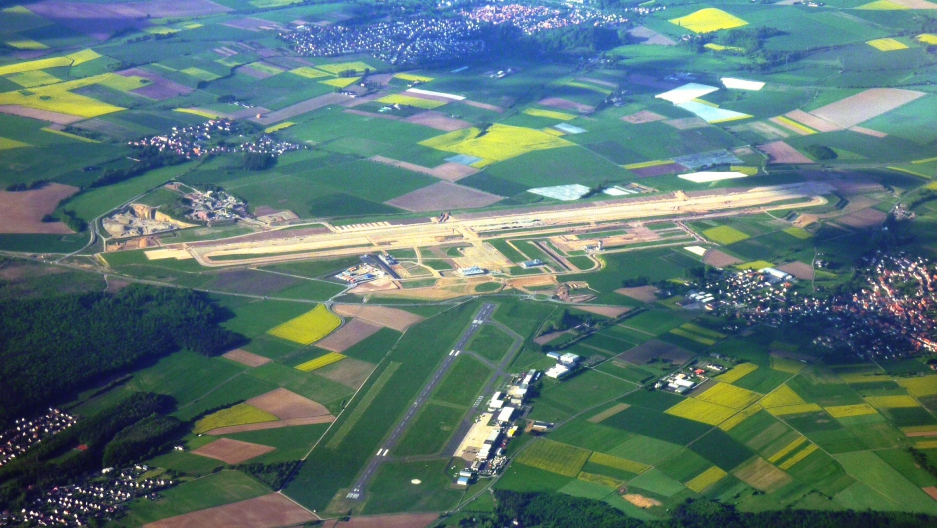 The former airport in Calden, Germany is now a refugee camp for about 1,400 people. The town's population is 3,000.

Felicitas Jung just started her first year at a university in Berlin, but she still keeps in contact with her friends from Syria and Albania.

Jung is from Kassel, Germany. She and several friends spent much of their summer holiday volunteering at a refugee camp that has sprung up in the nearby town of Calden, at a former airport. Calden has a population of about 3,000. The refugee camp houses somewhere between 1,200 and 1,800 people depending on the day. These refugees are families, children, elderly people, and lots of young men who have left their home countries.

"The refugees are definitely topic number one at the moment. It's sometimes not easy for Calden to handle the situation," says Jung. "Calden is a small community with two supermarkets, one bakery, and one fuel station, and there are up to 1,800 refugees in the camp who are bored and have nothing to do. So they had, for example, some problems with people stealing in the supermarkets or drinking in the park during the day. But I don't want to say that it's creepy to walk through Calden! Definitely not! In a small town, it just attracts more attention."

The camp was organized by the regional council and is run by volunteers who help prepare food. "We get the bread from a bakery nearby, so they bring everyday about 2,000 pita breads and 3,000 rolls for breakfast," explains Karla Schuchardt, another university freshman who volunteered at the camp over the summer. "We put honey and jam with bread on every plate for breakfast, that takes about 1.5 hours, and then the refugees come to us and we check on their ID cards to see how many meals they get and give it to them." Lunch is usually meat — no pork, because many of the refugees are Muslim — and dinner is a similar allotment of meat and bread. Children and pregnant women get special allowances of milk at breakfast and dinner. 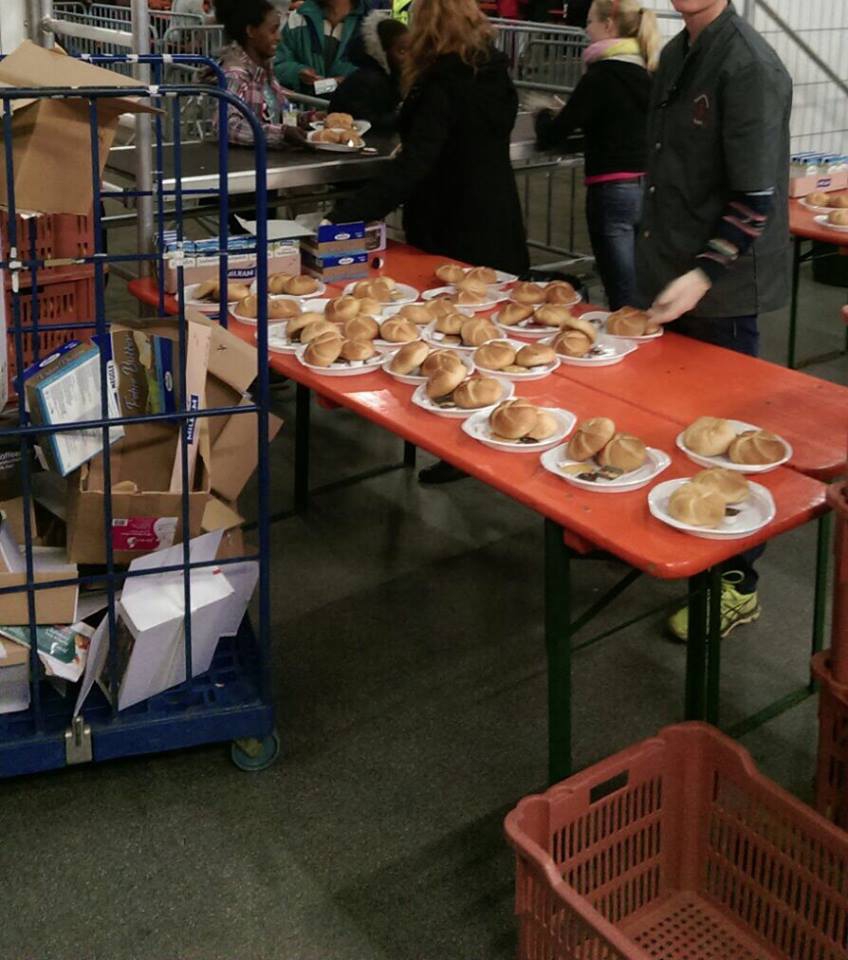 Volunteers prepare food for hundreds of refugees each day at a camp in Calden, Germany. "We get the bread from a bakery nearby, so they bring everyday about 2,000 pita breads and 3,000 rolls for breakfast," says Karla Schuchardt, a university freshman who volunteered over the summer.
Credit:

This past summer most of the volunteers at Calden were university students. "Three of my friends and my brother were working there as well. The other workers were mainly students, so the atmosphere was really nice and all of them are really friendly," says Schuchardt.

But the atmosphere is more difficult for the refugees: "It is absolutely boring for them. They can take the bus to Kassel, it's just over 20 minutes. Some of them help a little bit in the kitchen or doing some cleaning, maybe in the camp. And there's a small tent where they have a few games or they can draw. But there's not a lot to do," says Jung.

Many of the refugees fill up time talking with the volunteers — most speak English — and trying to learn German. "When we give out the food we always try to talk German to the people. Because we're in Germany and we want to teach them a little bit," says Jung. "We always ask them if they want to have butter for their meal in the evening. Everybody knows this word because we say it all the time. Sometimes the kids are just coming and saying 'butter butter.' It's really funny." Calden now offers German classes for the refugees to keep up with their interest in learning the language.

At the end of September, a fight broke out in the camp. It took over 50 police officers hours to restore peace. It seems the fight was drawn along nationality lines; people from over 20 different nations are being housed in one facility.

"It is not easy sometimes to understand what is going on in the camp. Everybody tells the story a little bit differently, saw something different," says Jung. "This day it was just trifles that finally ended in such a big fight."

Jung is frustrated with the media coverage of the riot: "The sad thing about it is that in TV, in radio and newspaper, everywhere people report about the bad things going on in the camp. But most of the time it is a peaceful atmosphere here and people should get to know more about the positive aspects going on."

The riot became more fuel for anti-refugee and neo-Nazi groups all over Germany. There have been protests against the Calden refugee camp and others around the country and and increasing number of attacks on asylum seekers and their homes. The German Ministry of the Interior reported 173 criminal incidents in the first six months of this year. On Thursday, there were demonstrations planned in Kassel against policies that welcome refugees. Pro-refugee demonstrations were planned at the same location, and demonstrators were urged to bring balloons and signs.

One refugee, who calls himself Hussam on Facebook, posted in a group used by volunteers to coordinate: "People of Calden we apologize for the troubles caused by some bad people in the camp to you and your lovely village. We Syrian people do not like this, we have ran away from the war because we want to live in peace. Thank you for hosting us." The post has over 400 likes.

Permanent residency in Calden is not possible for most of the refugees, and most don't stay long. "I'm really sorry for them and I don't want to tell them they can't stay here," says Jung. "Some of them were sent back home, some of them were sent to other cities in Germany. Just a few are still here because they took a lawyer."

But for Jung, the connections remain. "I'm still in contact with some of them that are not in Germany anymore. Sometimes I ask what they're doing, they ask what I'm doing, it's cool."