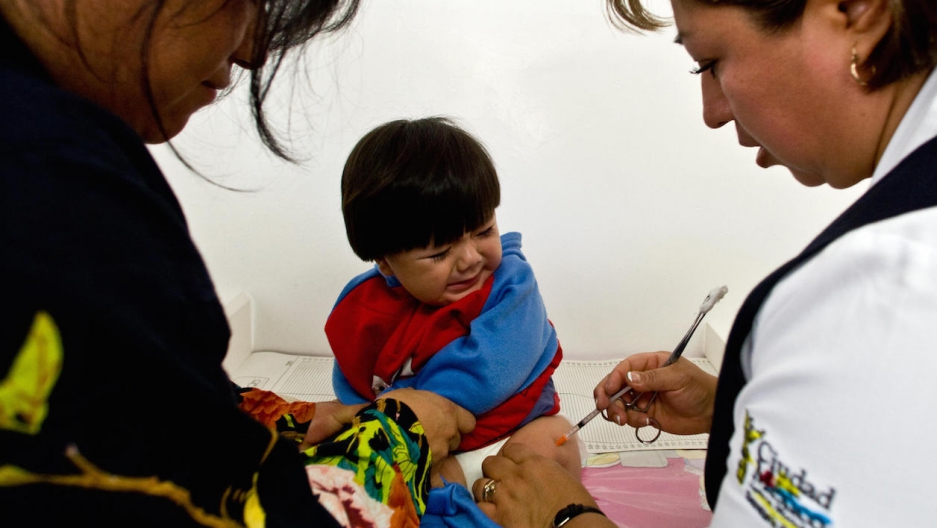 A child is vaccinated against hepatitis B at a health center in Mexico City in 2009. Vaccines like this one, derived from biological sources, are known as biologics or biopharmaceuticals.
Credit: Luis Acosta
Share

LIMA, Peru — For its backers, including the White House, the world’s largest ever trade deal is a no-brainer.

According to the Obama administration, the Trans-Pacific Partnership agreement drafted last weekend by 12 Pacific Rim nations will boost trade and economic growth in each of those countries, the United States included.

But in four of them — Peru, Mexico, Malaysia and Vietnam — the TPP may have a particular dark side. According to leaks of the still-under-wraps treaty text, the deal would block some of those nations’ poorest citizens from accessing life-saving, cutting-edge medicines known as “biologics.”

Widespread reports on the leaks say the TPP will require between five and eight years of “market exclusivity” for the original branded version of these drugs, derived from living organisms and used in gene and cellular therapies, vaccines, and allergy shots.

“Market exclusivity” means that for that period, starting when the original pharmaceutical comes onto a national market, no generic versions can be sold there.

Peter Maybarduk, of the Washington DC-based nonprofit Public Citizen, says that the market exclusivity clause is thought to be just one of several that block generic drugs in poor countries, although the details remain murky.

“There’s no doubt the TPP will contribute to preventable suffering and death,” Maybarduk told GlobalPost, although he also stressed that campaigners had been successful in heading off an attempt by the Obama administration, under pressure from big pharma, to demand market exclusivity of 12 years.

But the reported clause still crosses the “red lines” that the Peruvian government had set for itself when it sat down to negotiate the TPP, vowing to defend patients here.

Peru’s economy minister, Alonso Segura, has justified Peru’s change of heart by noting: “There are always issues that you must concede in order to win others.”

Voters here are now waiting to discover what concessions their government has won in return for backing down on generic medicines.

If the reports are correct, Peru would eventually need to fork out an extra $152 million annually to make up for the loss of generic medicines to its citizens by instead buying the more expensive originals, according to a study commissioned by the health ministry.

Yet the TPP may still struggle to get past lawmakers in each of the member nations, who need to ratify the deal.

Even with the text they will be voting on not yet public, there’s no shortage of opposition. This week Hillary Clinton, the favorite to be the Democrats’ 2016 presidential candidate, suddenly announced her opposition to the treaty, for which President Barack Obama has pushed so hard.

Many voters in Malaysia, Mexico, Peru and Vietnam may be hoping their local politicians adopt a similar stance.