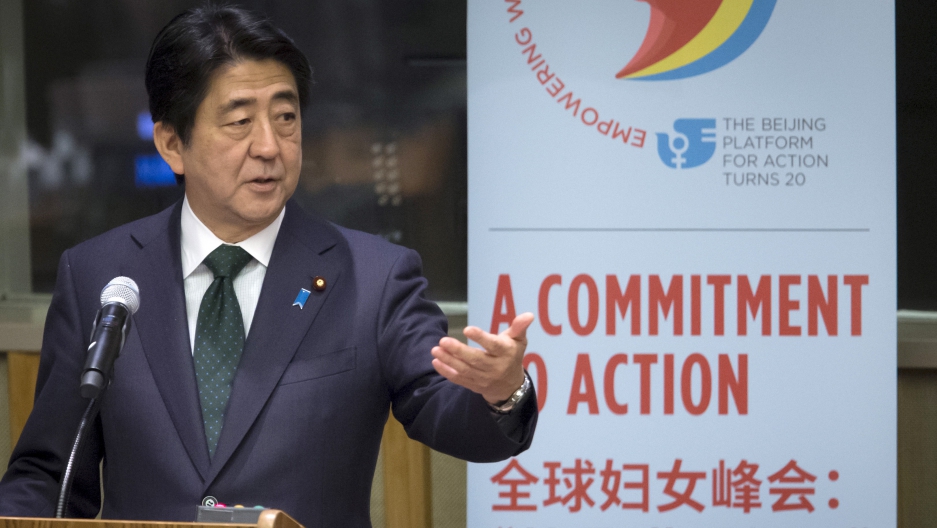 Prime Minister of Japan Shinzo Abe speaks during the Global Leaders' Meeting on Gender Equality and Women's Empowerment at UN headquarters this September.

When it comes to babies, Japan has a big problem. The birth rate just hit record lows.  Last year the population shrunk by the largest amount ever, society is rapidly aging and the economy has been lackluster for years.

The country’s most underutilized resource? Its women.

Having a career in Japan and raising a healthy kid is still too often seen and portrayed as an either/or option.

Japanese women who aspire to have both a career and a family have long considered their best options to be: leaving the country, nowadays working at a startup, or finding work at an international company in Japan. But even there, it can come down to who your manager is.

Aya Nishimura is a consultant at a large international company in Tokyo. Aya Nishimura is also not her real name. Because of how sensitive this topic can be, we’ve agreed to refer to her by a pseudonym.

She’s 33, she’s been married for six years, and she doesn't have any kids. Yet.

She says, “I don't hate kids, and it’s not like I never want kids. I’m just waiting for the moment,  and I don't know when.”

Nishimura works really long hours. When she started her current job, her then boss told her, “You need to tell me when you’re having babies. And I was like, do you want me to tell you when I’m having sex ... or, like, what does it mean, y’know??”

But Nishimura knew what it meant. Even though she and her colleagues are guaranteed a year of maternity leave, in Japan, a lot of society still expects and pressures women to quit once they have kids. When one of Nishimura’s coworkers told her boss that she was pregnant, his first response was to ask her if she was going to quit

Nishimura calls it a bad reflex ... but says it’s inexcusable.

“You need say 'omedeto' first.” Omedeto means congratulations in Japanese. “No matter what you think, or even if you don't mean it, you need to say omedeto first.”

Her coworker told her boss she would take ikukyu, maternity leave, and the boss replied he didn't know what that meant. But Nishimura says he actually has a 2-year-old at home; he should be aware.

On paper, women’s participation in the Japanese labor force actually seems high: 64 percent.  But more than half of those employed women are only working part-time.

That’s because currently about 70 percent of Japanese women stop working when they have kids. Some re-enter the workforce but then usually only in part-time positions.

Professor Keiko Hirao, who studies women, families, and the labor force in Japan, says what’s striking is that, “women with higher education are no less likely to leave the labor force than high school graduates.”

There are many Japanese women who’ve built amazing careers. Like Nishimura, they’re smart, highly educated and very ambitious. So in recent years the number of women working full-time has gone up. But Hirao points out that “the majority of those women are either single or childless.”

Outdated social norms and government policies all contribute to the problem: like the fact that dads rarely play an active parenting role, daycare waiting lists are incredibly long, government policies actually reinforce the breadwinner system by giving tax breaks to households where one spouse works only part time, and Mata Hara — maternity harassment — has become a buzzword. It’s used to describe women who’ve been harassed, demoted or even fired after returning from maternity leave.

Just a few years ago it wasn’t uncommon to hear a Japanese politician say that the best way to get women to have more babies was to advertise. Just tell them to make more babies.

Nowadays, the Japanese government officially recognizes that it needs to do more to support working women, so they can help raise the GDP and also have kids.

Prime Minister Shinzo Abe has wowed internationals with his plan to do that, a plan dubbed ‘Womenomics.’

In English the government translates these Womenomics policies as being for “gender equality,” but in Japanese they carefully stress that these policies are for "a society where, "men and women can cooperatively participate.”

Just a few years ago Abe was known as a staunch anti-feminist who helped lead a campaign against “gender equality.” Hirao and other scholars point out that in today’s political discourse, gender equality is still a no-go.

After years of talk, what can be called the first real law of ‘Womenomics’ was enacted in August. The law requires large companies to publish data on the number of women and the ratio of women in management; it does not address the work environment.

Last April, the government offered subsidies to companies that promoted women, but they recently announced that not a single company had applied for one.

Many say that the fact that the government is even talking about working women is a big step forward, but more than changing policies, it’s about changing what businessmen, politicians — everyone thinks men's and women’s roles are and should be. And that has to be addressed through education.

Growing up, Aya Nishimura had friends whose parents both worked full-time. “There are more families with double income earners than single income earners,” Hirao says. And that’s been the case for a long time. But because social norms, the media, and policies haven’t always acknowledged this reality, sometimes even the younger generation is just as willing to hold on to old ideas.

Nishimura has seen a lot of her well-educated friends quit after having kids and then regret it.

But she also doesn’t quite agree with acquaintances who’ve put their new babies in daycare after 2 or even 7 months.

“In a way, like, there’s a mujun here," she says. A contradiction. Because despite being focused on their careers, many still accept that it’s primarily the mom’s job to raise the kids. And many still think putting a child in daycare is kawai-so — sad.

Two years ago, Nishimura actually got into a big fight with her husband after his family blamed her for not having had kids yet. “Eventually I told my parents-in-law that I’m never going to see them again except weddings and funerals,” she says. And she’s stuck to it.

Her husband is supportive of her career and there are younger men and women and even specific companies in Japan that are known for being more progressive. But with all the pressure, Nishimura does worry that one day she may end up doing what she never imagined: stepping off the career path.

Prime Minister Abe’s ‘Womenomics’ is supposed to be for a Japan where “All women can shine.”  But as another successful career woman with kids recently put it, “We are shining enough!”

In Japan, it’s the rest of society that needs to catch up. And judging by the numbers, the country’s future literally depends on it.