Cacheta Francis poses next to her King of the Forest shrub, one of many traditional Jamaican plants she uses for bush medicine.

I was born and raised in Miami, but my very Haitian mom always kept true to her roots, especially whenever I didn’t feel well. Have a sore throat? Sour orange leaves can fix that. A tummy ache? Freshly picked mint from the backyard will ease the pain.

She is a believer of remed fey, or bush medicine.

To some, the wild green plant with five point leaves may be just an annoying weed, but to many in South Florida’s Caribbean community — Jamaicans, Bahamians, Trinidadians, Haitians — it’s the "it" plant for just about every ailment.

Dayana St. Fort was born in Haiti. She lives in Pembroke Pines and she also grew up drinking asosi tea. “I don’t think there’s a place that you would go in Haiti and say, ‘I have a fever, I have a sickness,’ and one person won’t tell you, ‘Did you drink asosi?,’ she says.

Cerasee or asosi is typically prepared as a tea: Wash the vine; throw it into a pot of water, leaves, stems and all. Boil and simmer until the water turns a murky greenish brown. That’s it. 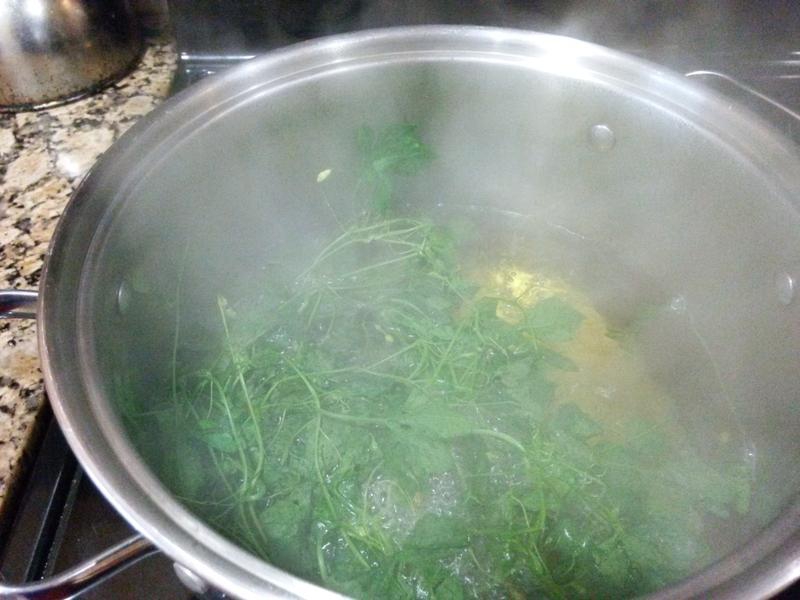 A fresh pot of cerasee or asosi tea, a traditional plant used across the Caribbean for all ailments.

In North Miami Beach, Audrey Rowe stopped by her friend Cacheta Francis’ house to pick some cerasee growing in the backyard.

“This is where I come when I’m sick and I really need some old-time herbs,” she says. Rowe and Francis are both Jamaican. Everyone calls Francis “Sister Francis” because, at age 81, she’s a respected elder.

Francis is a religious woman whose backyard is filled with the healing bushes she grew up using in Jamaica. "You know the herb is the healing of the nation," she says. "The Bible say so."

She points to a green shrub with slightly oval leaves, “This is Jack in the Bush.” Across the yard is a towering shrub with yellow flower clusters shaped like a candle. “You can drink that one over there, named King of the Forest,” she says.

When Rowe told Francis she'd been breaking out in small rashes, Francis said to come by for some cerasee leaves to use in a bush bath. “Before you rub yourself with it, you wash it and rub it all over where the itching is,” says Francis.

Some people from the Caribbean believe there’s almost nothing cerasee doesn’t work for. But even cerasee devotees say some of the claims might just be tall tales. Rowe said growing up in Jamaica people used to tell pregnant women that if they wanted their babies to be born with pretty brown skin, they should drink cerasee. “I think this a joke,” she laughs.

Still, cerasee is in demand, especially for Caribbean transplants now living in South Florida. In some Caribbean grocery stores and health food stores, cerasee is sold in tea bags or dried.

But because of Florida's recent wet weather, fresh cerasee is practically everywhere, wrapping itself around highway traffic signs and across fences. People like St. Fort, who grew up in Haiti, know to keep an eye out for the trusted plant. She belongs to an unofficial club of Caribbean folks around South Florida who pick bushes from other people’s front yards and the side of the road. She says: “Once you see this crazy woman on the side of the street picking up bush, you can say, ‘Oh, she’s from the island. She’s picking up bush to make some kind of remedy.’”