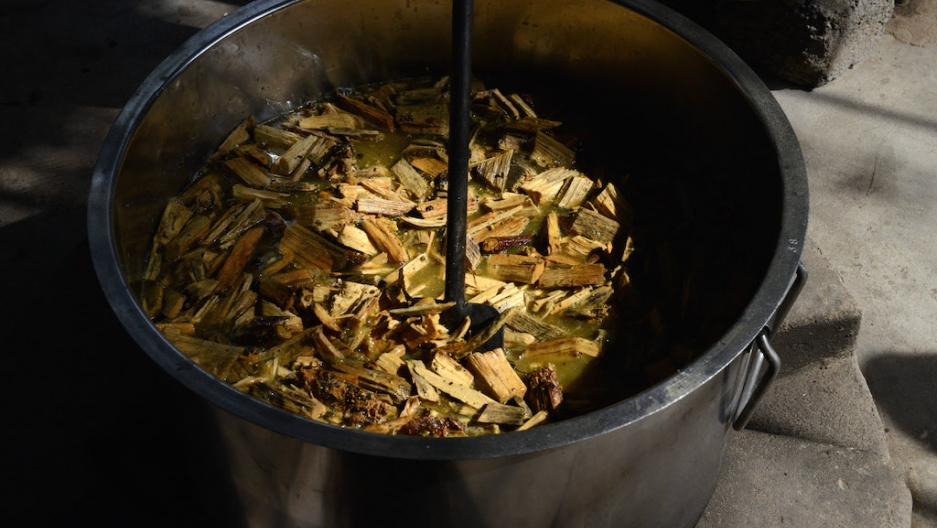 A mixture of herbs and cow urine is brewed at a 'gaushala' - cowpen - in the village of Luni in Gujurat state, June 5, 2013.
Credit: SAM PANTHAKY
Share

HARIDWAR, Uttarakhand — In a concrete-block factory a few miles from one of the holiest spots on the Ganges, workers in hairnets and beanies slap caps on bottles zipping down an assembly line. A few feet further, another group sticks on no-nonsense, pharmaceutical-looking labels that read, “Divya Godhan Ark.”

The room reverberates with a droning, mechanical whir, and it’s redolent with a distinctive smell — like when you first open a jar of multivitamins, combined with a gas station men’s room.

That’s because the clear liquid in the bottles is purified cow’s urine — quite possibly the fastest growing alternative medicine in India these days.

“Cow’s urine is a diuretic. It helps in detoxification of the body, and many other beneficial effects are described in the Sanskrit scriptures, such as helping to expel excess bile,” says Anil Kumar, a vaidya — practitioner of Ayurvedic medicine — employed by the company Divya Pharmacy.

Since successive Indian governments stepped up their promotion of alternative medicine a decade or so ago, unproven health products and nutritional supplements made from cow milk, cow urine and cow dung have become huge business.

Patanjali Ayurved, the brand’s parent company that makes everything from herbal cosmetics to juices to cornflakes, has estimated annual revenue of around $380 million, according to investment firm Credit Lyonnais Securities Asia. Other producers such as Calves N Leaves and Vedic Cow Products report year-on-year sales growth of 10 and 30 percent respectively. And it’s not just the masses buying it: Cow dung is giving tea tree oil a run for its money at posh stalls like The Thela (“the cart”) in some of the country’s biggest malls.

Pupils at Shree Swaminarayan Gurukul Vishwavidya Pratishthanam, a Hindu school in Ahmedabad, apply a holy paste made up of cow dung, cow urine, milk, ghee and curd before a sacred ceremony on August 24, 2010.

Bovine products are just the tip of a mammoth iceberg of soaps, lotions, ointments and medicines founded in ancient Indian texts.

But medical doctors warn they can be harmful, despite being “all natural,” and critics argue that the government is promoting alternative medicines without seeking to test their efficacy and develop them into modern treatments.

Worse still, the focus on these unproven remedies may be detracting attention from the genuine crisis in the mainstream healthcare sector — where this year the government slashed federal funding in a bid to push responsibility onto the states.

Doctors complain that patients come to them when their cancer has progressed too far for surgery or when hepatitis has already resulted in liver failure, because they’ve spent weeks or months in the care of alternative practitioners. Meanwhile, as an ongoing outbreak of dengue fever in New Delhi has illustrated, the public health system is creaking its way toward abject failure, says Dr. Sumit Ray, vice chairman of critical care at the capital’s Sir Ganga Ram Hospital.

People “are desperately looking for alternatives which are not expensive,” he said in a telephone interview. “That is understandable. The failure is on the part of the government.”

"If you want to save yourself from cancer, there is a need to protect cows on a priority because cow urine is effective in curing cancer completely. It can cure cent per cent. I can vouch for it."

This summer, for example, Delhi’s worst-ever outbreak of dengue — a vector-borne illness spread by mosquitoes that spikes during the monsoon season — has resulted in some 7,600 infections and at least 25 deaths.

In this case, cow’s urine is not involved. But prices have spiked this monsoon season for products like goat’s milk and papaya leaves that some Ayurvedic doctors say can alleviate symptoms associated with dengue — even though medical doctors caution that they’re of little benefit.

Meanwhile facilities and personnel at government hospitals are dramatically overstretched. In some cases, hospitals have been compelled to put two or three children in one bed and set up cots on balconies to house the influx of dengue patients.

Though a program to standardize and promote traditional medicines has been in place since 1995, some see a direct connection with Prime Minister Narendra Modi’s Hindu nationalist support base.

After Modi took power in May last year, the department of Ayurveda, Yoga and Naturopathy, Unani, Siddha and Homeopathy, or AYUSH, was upgraded to ministry status in November. Despite spending just $105 million of the $195 million it was allotted as a department in 2014, this year the new ministry was awarded a budget of $185 million. Meanwhile federal funding for the National AIDS Control Organization, which also failed to spend all its 2014 funds, was cut to around $215 million from $275 million last year. (India has an estimated 2.1 million people living with HIV, representing the third-largest number of cases in the world.)

While investing in alternative medicines is not a bad idea in itself — in China, for example, research into traditional remedies resulted in the discovery of the anti-malarial drug artemisinin in the 1970s — critics point out that India’s program seems more oriented toward marketing than scientific research.

A storekeeper displays a bottle of cough syrup made from cow urine on sale at his pharmacy in Ahmedabad, February 27, 2010.

Few, if any, studies have been published in respectable, peer-reviewed journals, they say. But that hasn’t stopped practitioners — and politicians — from making grandiose claims, in part because the rules governing such “supplements” are less stringent than those for allopathic medicines.

“If you want to save yourself from cancer, there is a need to protect cows on a priority because cow urine is effective in curing cancer completely. It can cure [100] percent. I can vouch for it. Nobody wants to hear this,” Shankarbhai N. Vegad, a member of parliament for the ruling Bharatiya Janata Party (BJP), announced to the upper house in March.

And in January, the governor of Karnataka state, Vajubhai Rudabhai Vala, proclaimed that while allopathic medicine might control disease, only Ayurvedic medicine has the ability to cure it — permanently and without side effects. Meanwhile, high-profile practitioners have claimed that Ayurveda can treat dengue, epilepsy, AIDS and other serious conditions.

Advocates of Ayurveda do more than just talk. Last year, for instance, a bill was introduced that would have allowed AYUSH practitioners to perform abortions, if it had passed. Tuberculosis experts bemoan a decision to allow AYUSH practitioners in certain states with a shortage of medical doctors to prescribe antibiotics — saying bad prescriptions have contributed to a spike in antibiotic resistance. And AYUSH Minister Shripad Yesso Naik recently announced that five new universities of alternative medicine will be set up in the name of the prestigious All India Institute of Medical Sciences (AIIMS), despite the lack of scientific evidence for the principles they’ll be teaching.

“India cannot be completely different from the rest of the world,” Ray said. “It’s been established that healthcare improves with increased spending on public healthcare and improved nutrition and sanitation.

“You can invest in alternative medicine, too. But more stress has to be on allopathic medicine.”

A woman piles cows dung onto a cart in the village of Luni in Gujurat state, June 5, 2013.

At Haridwar’s Divya Pharmacy, a unit of the Patanjali Ayurved group founded by a wildly popular television yoga guru known as Swami Ramdev, there’s some evidence the company is attempting a marriage of the two systems.

In a hushed office that — apart from the portraits of the robed and bearded swami on the walls — looks as though it could belong to Merck or Pfizer, an employee fans out confidential studies on the chemical properties of cow’s urine, some conducted in house and others independently. One compares its efficacy in treating cancer with the chemotherapy drug doxorubicin.

A quick scan of some of the publicly accessible research suggests that credible proof is a long way off.

But perhaps one day we’ll discover that quaffing cow’s urine is not as crazy as it sounds. The estrogen treatment Premarin, after all, was developed from pregnant mare’s urine by the erstwhile Philadelphia-based pharmaceutical firm Wyeth in the 1940s.