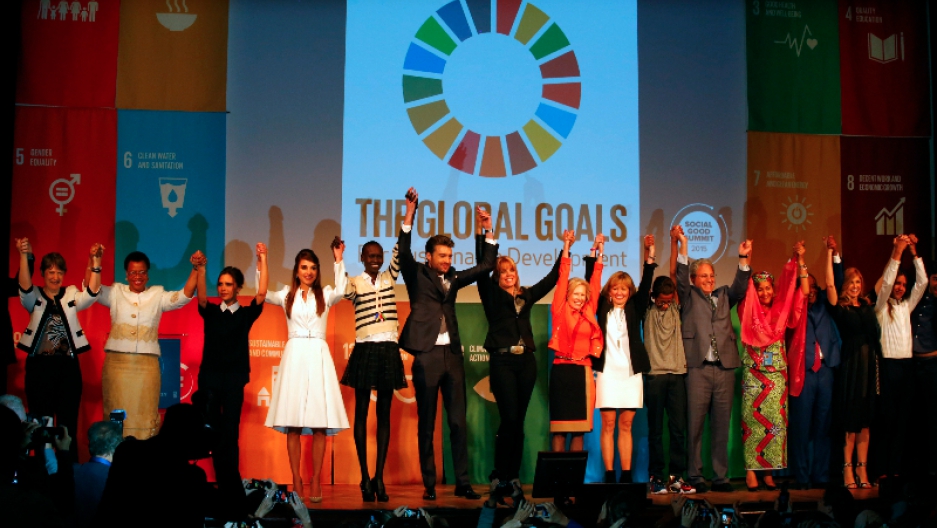 NEW YORK — Just weeks after the inauguration of the United Nations’ new Sustainable Development Goals, new corruption allegations have dampened the launch of these 17 initiatives that aim to transform our planet.

UN official John Ashe, who served as the President of the General Assembly from 2013 to 2014 — a critical period in the development of the Sustainable Development Goals, or SDGs — is facing charges by US federal prosecutors for his alleged involvement in a bribery scheme that involved more than $1 million in payments from sources in China for assistance in real estate deals and other business interests.

The SDGs were formally adopted last month with all 193 United Nations member-states adding their pledge to work towards a better world “leaving no one behind.”

The plan is to reach these goals by 2030, and if that is achieved we will indeed have a wonderful planet. ‘No poverty,’ ‘zero hunger,’ ‘gender equality,’ ‘peace, justice and strong institutions’ are just a few of the things we can look forward to in the next 15 years. But Tuesday’s accusation against Ashe have further tarnished the global initiative that have been met with mixed reactions.

Many of the 17 global goals and their accompanying 169 targets fail to set any measurable aim but instead use language such as “reduce” or “support and strengthen.” Others are practically unattainable such as the target to “eliminate all forms of violence against all women and girls” and to “end hunger” and “all forms of malnutrition.”

So what are the chances of actually making any of these goals happen and are governments really getting behind these initiatives? After years of great debate and registered disagreements on numerous points, all UN member states have signed on to the SDGs, but the goals are not legally binding. Rather, they serve as guidelines that each nation is encouraged to consider when forming national policy.

From the delegate statements made at the UN General Assembly in recent weeks, it seems the emphasis is often placed on more convenient goals.

“Some countries will pick and choose, like a shopping list,” said Danny Sriskandarajah, CEO of CIVICUS: World Alliance for Citizen Participation, an organization that works to strengthen civil society and civil action worldwide.

He cited Colombia as an example of a country whose leadership released a report committing to tackle just 109 out of 169 SDG targets, leaving out those on climate change.

In line with Sustainable Development Goal 5 on gender equality, the UN initiative titled Every Women Every Child received support from 45 nations, according to Nana Kuo, UN secretary-general of the campaign. Although this number was a significant achievement, she said, the majority are countries where women already enjoy a large degree of equality, whereas there is a worrying absence of support from Arab and Middle Eastern nations.

Although governments are not obligated to take action, their universal agreement in regard to these 17 goals does provide a platform for activists and citizens to push their leaders to action.

“The one thing this commitment does give us is a way for the public to hold leaders accountable for the promises they made,” Sriskandarajah said.

The SDGs will replace their predecessors, the Millennium Development Goals, which expire this year. Set in 2000, the MDGs marked the first time the world came together to tackle extreme poverty through eight goals that addressed health and hunger, gender equality and environmental sustainability. Although widely criticized, the MDGs did result in some significant global achievements.

The under-five mortality rate, for instance, was cut by more than half reaching the lowest number in history. And the number of people living in extreme poverty was reduced by around one billion. New HIV/AIDS infections fell by 40 percent worldwide.

But other goals have failed to meet expectations. 2.4 billion people, about a third of the world’s population, still lack access to basic sanitation facilities. Global emissions of carbon dioxide have increased by over 50 percent since 1990, the base year for the MDGs, and gender inequality still remains a major obstacle to obtaining real success in other areas.

Moving into this new 15-year period with the SDGs raises questions about how these goals will be measured. Many of the achievements made with the MDGs have been unevenly attained. While some regions have made significant gains, others have been left behind.

Part of the problem comes from poor measurement methods. One major obstacle is the estimated high number of unregistered people worldwide. With an official population of 190 million, Pakistan is one of the most populous nations, but unofficial estimates place the population closer to 260 million, with the poorest and most at need falling through the cracks. In Kenya, families have up to 16 years to register the birth of a child, but even then, many of the most poverty-stricken families fail to register their children, in particular girls. Until registration systems are improved, a true picture of poverty, child immortality and vaccination rates among others can not be achieved.

Another has to do with insufficient measures of poverty. The official measure that separates “extreme poverty” from moderate poverty is a consumption rate of less than $1.25 per day. By this standard, poverty has been reduced by half since the establishment of the MDGs. There are complicated calculations in place that supposedly account for inflation, but in many underdeveloped countries – particularly those experiencing instability and conflict – inflation rates can escalate rapidly. In cases of mass migration due to war or natural disasters, data becomes impossible to collect and in many countries reports are often misrepresented by authorities to suit their own agendas.

But Sriskandarajah, head of CIVICUS, says when it comes to data, the Sustainable Development Goals are the beginning of a new era in which governments can be held more accountable.

“To me the most exciting part of this new agenda is data,” said Sriskandarajah, following his speech to the UN General Assembly last week. “If you wanted to check progress on the MDGs you had to rely on official statistics which are usually outdated and often incomplete and sometimes wrong…Because of the advancements in technology and communication, we now stand at the threshold of shifting data back into the hands of the community.”

Sriskandarajah said social media and data gathering websites are now allowing citizens to monitor their own governments when they can’t rely on official reports to reflect reality. He gave an example from India where a citizen-run website mapped complaints of corruption within the public services and another in Egypt that allowed women to voice complaints against gender violence. Both resulted in statistics far different to the official numbers being recorded by government institutions.

“What we [CIVICUS] are trying to do is invest in the ability of citizens and activists to monitor the goals and produce new data to keep governments in line with the targets they have signed on to,” he said. “By analyzing these together we can create a global think map giving a more accurate depiction of what is happening globally.”

The new SDGs have been widely criticized as being too broad and too obscure. But they do include crucial goals that the MDGs overlooked. They include goals towards peace, industry, and economic growth as well as a heavy focus on environmental issues which address the root causes of poverty, hunger and poor health.

The MDGs had a heavy focus on aid, in effect dividing the world into rich donor countries and poor recipients. The new goals focus on a global effort with an expectation that all countries will play a role. And beyond governments, NGOs, citizen organizations and the private sector have been brought into the discussion in ways they haven’t before—which will hopefully result in a more global effort.

Recognizing this shortfall, Croatian President Kolinda Grabar said in her address to the UN last Monday, “Too often, instead of… addressing root causes in their early stages, we spend more time and resources on the crises that we have allowed to spin out of control.”

During the Assembly, UN Secretary-general Ban Ki-moon, urged all sectors to work together. “We must do everything we can to close the gap between the world as it is, and the world as it should be.”