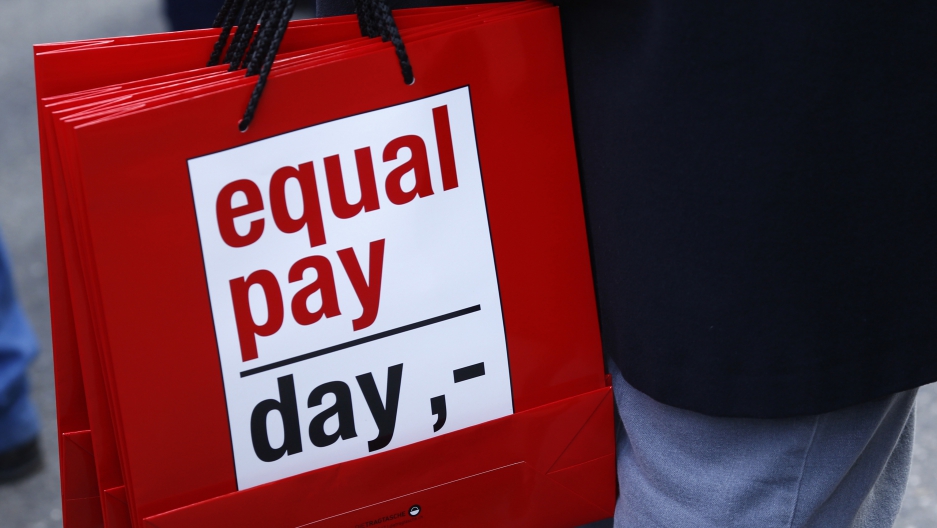 The state of California is working to say goodbye to the gender wage gap.

This week, Governor Jerry Brown signed the Fair Pay Act, a new law that goes further than any federal measure to ensure equal pay for equal work. The law forces employers who pay more to a man working the same job as a woman to prove that the pay is based on elements other than gender.

The new law also changes the rules on whether and when employees can sue employers regarding pay issues, and it also allows employees to discuss pay without fear of retribution.

“Women are head of household in 40 percent of households,” said the bill’s co-sponsor, California Assemblyman Bill Dodd. “It's not just a gender problem — it's a family problem; it's a human problem. And essentially what [bill] 1354 does is to make sure that, in the state of California, we're going to practice what we preach.”

Along with Rep. Dodd, Aileen Rizo is one of the women who helped make the new law happen. A math consultant at the Fresno County Office of Education, three years ago Rizo discovered that one of her recently-hired male colleagues earned $12,000 more per year, even though he had far fewer years of experience and education.

Rizo first learned of the pay discrepancy when her male colleague openly discussed the terms of his employment contract, and other men in the office joined in the conversation. Rizo took the issue to her superiors, but was met with roadblocks.

“It was like a shuffle of trying to make sure that no one talked to me, and that I would have absolutely no way to solve it internally in the organization itself,” she says.

Over the course of a 40-year career, the average American woman will lose out on about $431,000 as the result of the wage gap, according to the Center for American Progress. And the pay gap starts early: If a woman earns less in her first job, when she takes on a new role and her new employer sets her salary, it will often be based on her prior pay history, something Rizo acknowledges.

“One of the major [roadblocks] was my prior salary,” she says. “When women hold their prior salary, they’re holding something that’s a burden to them, especially when employers are consistently asking, ‘Well what did you make before?’”

Rizo eventually sued the Fresno County Office of Education (her lawsuit is still pending). And much like other activists, Rizo argues that salaries should be based on experience and education, not gender or pay history.

“It’s a much more fair way to pay someone, and a much more valid business reason, rather than just giving your previous salary,” she says. “Really the burden is now on the employer — before it was on the plaintiff to try prove there was some kind of equality there and no reason to pay someone different. But now the burden is on them, and it has to be a really good business reason — something that’s valid and has merit, not just something like, ‘Oh, we like him better.’”

Finally, Rizo says that the law will actually protect employers from costly lawsuits.

“How much money are [companies] spending on litigation when they just could’ve made it right to begin with?” asks Rizo. “If it’s made right now, that could be something that allows us to close the gaps for women.”