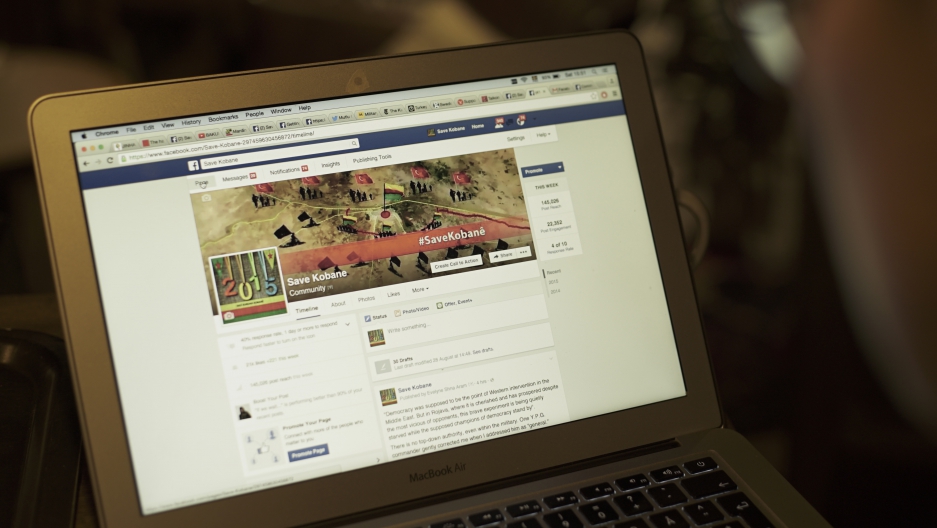 From the comfort of a cafe in central Stockholm, the fighting in Iraq and Syria couldn’t seem more distant.

But with the help of free WiFi, a group of Kurdish Swedes are taking on the Islamic State on the cyber battlefield.

“We share news about the war going on there. At one point we had over 10,000 followers,” says Ahmed, who immigrated to Sweden from Iraqi Kurdistan when he was 15.

Written in English, the page’s mostly Western audience was growing steadily. But this summer, he received warnings from Facebook for violating community standards. And it wasn’t for something you might expect, like posting bloody images from a warzone.

“It was a clip from Jon Stewart,” he says, referring to The Daily Show. “He explained Turkey intervening in the war against ISIS. But actually their fight was against the Kurdish militia, the PKK.”

In typical tongue-in-cheek form, Stewart reviews the news that Turkey had joined coalition air strikes on ISIS this past July. In the next clip, a reporter says that most of those strikes have been against the pro-American Kurds.

“So they’re stepping up their fight against ISIS by taking out the people most effectively fighting ISIS,” quips Stewart. “Brilliant strategy. Certainly no one will see that coming.”

The bit got a lot of likes on Ahmed’s page.

“It reached about 200,000 people with 1,000 shares after one day,” says Ahmed. “The next day, I log into Facebook and I get a warning that my post violates the standards of Facebook. I don’t understand why.”

The answer may lie in a secret document, reportedly leaked in 2012 by a disgruntled Facebook employee. It was the company’s violations list, which was not public. And it affects users worldwide. Most of the violations are for things you’d expect, like images of self-harm or sexual violence.

But several stand out for how specific they are to Turkey and the Kurds. For instance, users are flagged for posting maps of the disputed area of Kurdistan, and for insulting Ataturk, the founding father of modern-day Turkey.

Even more severe, accounts are automatically suspended for depicting fighters from the PKK, a militant Kurdish separatist movement considered a terror group by Turkey and the US.

For 30 years, the PKK has waged an armed struggle with the Turkish government, seeking greater autonomy for Turkey’s Kurdish minority of more than 14 million people. Combined with neighboring regions in other countries, the population of Kurds adds up to close to 28 million, according to the CIA Factbook, making Kurds the world’s largest ethnic group without a state of their own.

Recently, the PKK has also been among the most effective ground forces fighting ISIS, as Stewart pointed out on the Daily Show.

At one point, a one-second image of PKK combatants appears in the clip, and thus in Ahmed’s Facebook post. It seems that’s all it took for administrators to shut it down. Shortly afterward, Facebook took down the entire Liberty Lions page.

A Facebook spokesperson declined to be interviewed for this story. But in a written statement she said, “there is no place for terrorists on Facebook. We work aggressively to ensure that we do not have terrorists or terror groups using the site, and we also remove any content that praises or supports terrorism.”

Robert Faris, research director at the Berkman Center for Internet and Society at Harvard, says Facebook has a number of policies that dictate when it takes down content.

“This one is a particularly bright line. They have decided that all PKK content is going to come down. PKK has been declared a terrorist organization by the United States and other governments,” he says.

Facebook employs language experts, Faris says, who moderate pages for content that goes against Facebook guidelines, like references to the PKK. It’s a moderator behind each decision to take a post down they're prone to make mistakes. It’s a subjective process, though Facebook tries to make it as objective as possible.

“They have gone to great lengths to try and explain to the world the criteria that use for taking content down,” he says. “Part of me is sympathetic to what they have to try to do and part of me is not, in that they have signed up for this voluntarily and they are making a lot of money doing it. It’s a really difficult job to try and figure out what goes up and what goes down. They have to navigate political pressures and political sensibilities around the world.”

But critics insist that this rule is not applied to other groups or figures more commonly associated with terrorism.

“You know there’s nothing banning the image of Bin Laden, or Al Baghdadi, or the image of Hitler. Why is this the one issue in the world that I can’t talk about?” says Thoreau Redcrow, a researcher at Nova Southeastern University, in Fort Lauderdale, Florida. He concentrates on Kurdish guerrillas and is an advocate for Kurds.

After finding his own Facebook account blocked several times for posting his work, he tried an experiment to test the “terrorist” designation.

“The social scientist in me decided 'OK, well, I’ll sign up pages and test some of these theories,” he explains. “I would post a picture of a burning Turkish flag. And when I logged in eight hours later, ‘Op! You’ve violated Facebook guidelines. Do not do this again.’ And then I’d say, “OK, I’m going to post a map of Northern Kurdistan, with a guy giving a peace sign and saying ‘glory to Northern Kurdistan.’ And then there you go, you’ve violated guidelines.”

We asked Facebook if this is their standard protocol regarding Turkey and the Kurds. Again, they wouldn’t respond.

Turkey is infamous for cracking down on its critics, with more jailed journalists than almost any other country. When it comes to social media, no other government makes more requests to remove content from Twitter. Last year, Turkey blocked Twitter and YouTube in the run-up to local elections.

Redcrow notes that while those sites were taken down, Facebook has always stayed up and running in Turkey. He suspects it’s in no hurry to jeopardize its access to nearly 40 million Internet users.

Meanwhile, Kurdish rights activists are increasingly nervous that their pages will get taken down and their voices silenced.

Back at the café in Stockholm, a woman using the alias Evine eagerly shows me a picture on her laptop. It depicts the funeral of a Kurdish fighter with the YPG militia — a group that is not a designated terror group and is collaborating with US coalition air strikes against ISIS. Facebook still took the picture down, she says.

“I look at this picture and I don’t know how a grieving mother can violate the community standards of Facebook,” she says. “Why are we being censored to show our pain to the world? This is just a mother that is going in front of the casket of her son. Nothing else.”