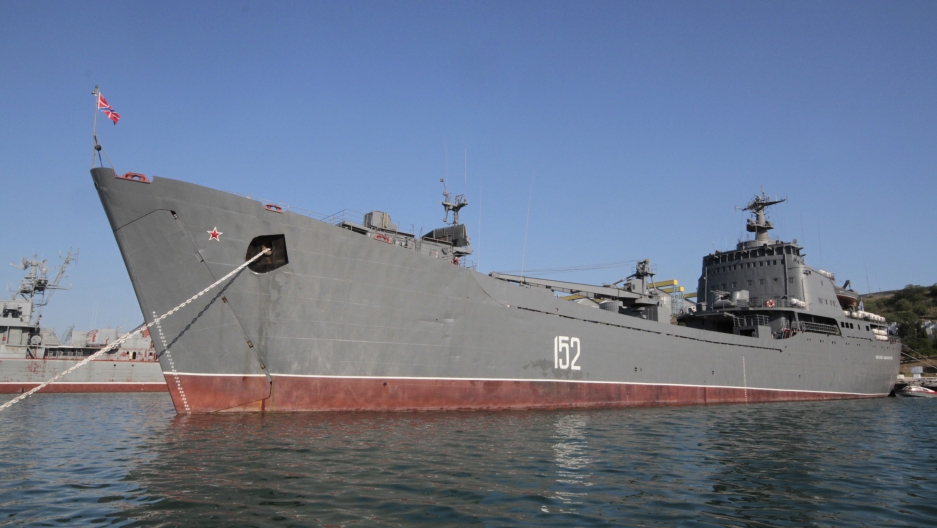 Russian Navy amphibious landing vessel "Nikolai Filchenkov" is docked at the Ukrainian Black Sea port of Sevastopol, June 19, 2012. The vessel can be deployed to support the Russian naval base at Tartus in Syria.

Russia has operated a military base in Tartus, Syria, for more than 40 years. Located on Syria's Mediterranean coast, the base has been in Russian hands since 1971.

“They leased it back in the 70s, back when they were Syria’s primary arms supplier,” says Edward Delman, who has written about this for The Atlantic.

But it’s only in the past couple months that Russia has shown a renewed interest in the base.

In 2012, Ruslan Aliev, the head of information at the Centre for Analysis of Strategies and Technologies in Moscow, told the BBC’s Frank Gardner that Tartus is “just a point on the map to replenish food and water and carry out some occasional repairs.”

He added that “there are a maximum of 50 Russian sailors and specialist technicians there.” Delman says in 2013 the Russians more or less evacuated the base.

But the base has seen a dramatic turnaround as the Syria conflict mounts.

“There are now about 1700 active personnel at the base who are working to modernize it and repair it,” Delman says.

Russia’s renewed interest in the base could be tied to its recent involvement in Syria. But Delman says a look at the country’s history shows it has always wanted to have bases in warmer waters.

“Russia is not a landlocked nation but if you look at what it’s owned historically, its oldest port is Arkhangelsk [also known as Archangel], which is on northern coast of Russia — [and] St. Petersburg,” he says.

Both of these ports, before the invention of icebreakers, were closed much of the year, because of ice and cold weather. That’s why Russia showed great interest in warmer waters in the Mediterranean.

“The sweep of Russian history throughout the 18th century can in many ways be seen as a sweep south, towards the Black Sea in order to gain access to warm water ports,” says Delman.

“Having a presence in the Mediterranean so you can play in the same court as NATO and everyone else is absolutely a priority to Russia, both from a military perspective and a symbolic [one],” says Delman.

Meanwhile, Russia is increasing its military presence at a second port in Syria, in the city of Latakia, north of Tartus.