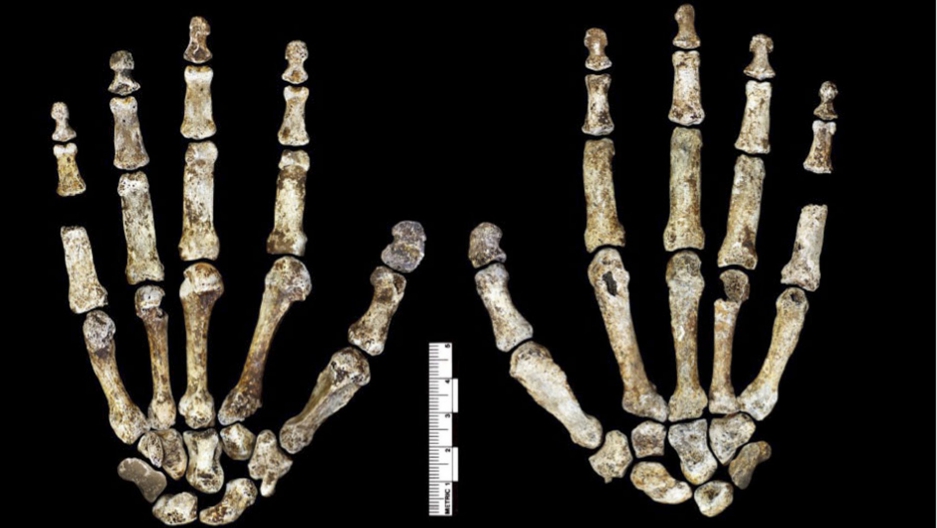 Bones from the feet and hands of an extinct species of early man reveal a versatile ancestor who climbed trees, walked upright, and made tools, two studies showed on Tuesday.

Homo naledi, whose existence was revealed last month with the discovery of some 1,500 bones in a deep South African cave, upends the notion that the evolutionary path to modern man was a straight line, the researchers say.

Among the primitive human species grouped under the hominin umbrella — including Homo erectus and Homo habilis — it revealed an unprecedented mix of ape and modern man.

A small brain and short stature, along with curved fingers and toes, pointed to its ape origins.

But tool-wielding hands and feet made for walking were closer to Homo sapiens, or modern man, than many of the other upright species that emerged some two to three million years ago.

Researchers have not determined the age of the H. naledi bones yet, so we do not know exactly where it fits into the increasingly complex timeline of early man.

"But regardless of age, this species is going to cause a paradigm shift in the way we think about human evolution," both in terms of behaviour and anatomy, says William Harcourt-Smith, lead author of the study focusing on the foot.

An analysis of the nearly-complete right foot — 107 foot bones in all — showed that H. naledi was well adapted for standing and walking long distances, found the study which was published in Nature Communications.

"The foot was more advanced" — that is to say more evolved — "than other parts of its body: for instance, its shoulders, skull or pelvis," Harcourt-Smith said in a statement.

This combination probably resulted in "another type of bipedalism," or upright walking, which is slightly different from ours or any other species alive at same time.

"There were lots of different experiments happening within hominins — it wasn't just a linear route to how we walk today," he said.

In the other study, also published in Nature Communications, a team led by researcher Tracy Kivell at Britain's University of Kent examined an equally complete set of bones from the right hand of another H. naledi individual from the same cave.

As with the foot, they found a mix of features that had never been seen in any other hominin species, some of them primitive and others modern.

The wrist and thumb showed clear evidence of "committed, habitual use of tools," the study concluded.

At the same time, slender and elongated fingers meant that their owner was used to swinging from branches.

Scientists disagree on whether the physical traits early man shared with tree-dwelling apes were vestiges of an earlier stage of evolution, or essential for the survival of newly-upright Homo species.

The study of H. naledi boosts the latter theory.

"This one hand suggests that even after the hominin hand had become well-adapted for complex manipulation, some hominins were still spending large amounts of their time climbing trees," Kivell said.

But versatility was no guarantee of success.

H. naledi — along with most other members of the Homo group — hit an evolutionary dead end.

"If recent, more complete hominin fossil discoveries have taught us anything, it's that strange combinations of more derived human-like features and more primitive features... are likely the rule rather than the exception," Kivell said.

The fossils, discovered deep inside a barely accessible cave complex near Johannesburg, are the largest, most complete set of hominin remains ever found, and added a new branch to the human family tree.