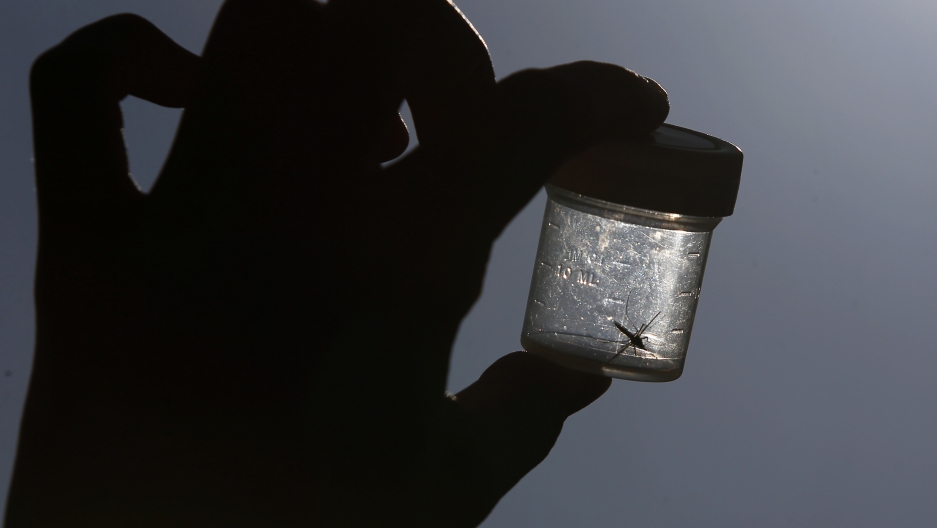 A mosquito is caught in a plastic box by a researcher in the eastern German town of Leipzig.

Some of the world's top scientists toil in anonymity, their breakthroughs recognized only years, sometimes decades after live-saving discoveries.

Tu was recognized with a Nobel prize today for rediscovering artemisinin, a plant derivative that has significantly reduced death rates from malaria. Her contribution isn't widely acknowledged today, even in her home country.

"In China, she refers to herself as the professor of 'the three nos' — no post-grad degree, no experience working abroad, no membership in the Chinese academy of sciences," says science writer Phil McKenna.

McKenna has met Tu and written about her for New Scientist magazine. He says Tu's contribution began more than 40 years ago during the Vietnam War, when China was allied with the North Vietnamese.

"At the time, the North Vietnamese were losing, by some accounts, more people to malaria than they were to US bullets," he says. "So they started this top secret, massive scientific project to try to find a cure for malaria."

So Chinese authorities reached out to the Academy of Traditional Chinese Medicine, where Tu worked as a researcher.  She reviewed more than 2000 traditional remedies in the academy's library, testing the ancient recipes on mice. That's where she learned about a compound derived from a plant called sweet wormwood, or Artemisia annua.

"There was this scroll from 400 AD and ironically it was called 'Emergency Treatments Kept Up One's Sleeve'" — ironic because it had been kept up China's sleeve for hundreds and hundreds of years, McKenna says.

When it came time to test the compound on humans, Tu, then in her mid-30s, stepped forward to be the first trial subject.

"It was pretty risky," McKenna says. "It's something that Chinese scientists and US scientists would not do today, trying something on themselves. But it was needed urgently so she volunteered."