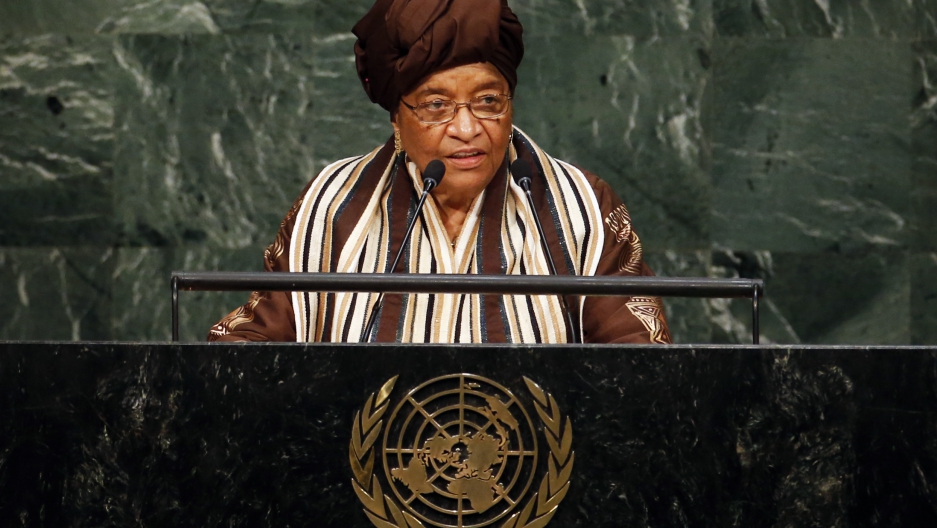 For the hard-hit countries in West Africa now rebuilding their communities and lives after the devastating wave of Ebola, the need for health care that is affordable and accessible is particularly pronounced.

“Our recent experience with the Ebola disease proved to be a real wakeup call because it exposed the weaknesses of our health system,” said Liberian President Ellen Johnson Sirleaf at the United Nations headquarters last week. “It pointed out to us that in that call, we need a more vigorous fight against health-related challenges, particularly infectious diseases such as malaria, cholera, typhoid, all of which are at high levels of incidences in our country.”

As heads of state adopted ambitious goals for the world to achieve in the next 15 years, a corps of health and political leaders, including Sirleaf, are publicly stressing the importance of adopting universal health coverage to help stem the next outbreak of infectious disease.

During a week where President Barack Obama has called child death from infectious disease a “moral outrage” and UN Secretary General Ban Ki-Moon declared that “human security depends on health security,” the link between health care and human rights is codified in the global agenda more than ever before.

“Universal health coverage with an emphasis on fairness and equity in health, leaving nobody behind, is exactly what the UN General Assembly has just adopted as one of the important principles of the SDGs,” said World Health Organization Director General Margaret Chan, at Monday’s panel discussion, where leaders discussed the path towards universal health coverage. “We need capacities to prevent, detect and respond to outbreaks and humanitarian crises. And we also need health systems that are resilient.”

While a year ago, Liberia was experiencing hundreds of new cases a week, it is now Ebola-free The virulent disease may have subsided, but it still lingers as a threat —and it’s not the only one. Public health officials agree that the next disease outbreak of infectious disease is imminent. The question is, which one?

Possibilities range from the MERS coronavirus in the Middle East and avian influenza in East Asia to mounting drug resistance that could unleash waves of deadly superbugs around the globe. Then there are the scores of perennial challenges such as childhood pneumonia and malaria. In 2014, 43 percent of the 5.9 million children who died under the age of 5 fell victim to infectious disease, according to the UN.

For the last several months, The GroundTruth Project has embarked on an in-depth, multi-part investigation in collaboration with NOVA Next that explores just how prepared the world is for a pandemic of global proportion.

In the multimedia series publishing this fall, the “Next Outbreak,” our journalists are reporting on the ground in Asia, Africa and North America, asking how doctors, epidemiologists and public officials responded to the last pandemic — and what it will take to be prepared for future outbreaks. They’re looking for places where the response fell short. But they’re also documenting the bright spots, instances where the ability to prevent, predict and respond to infectious diseases is gaining momentum.

The series features the doctors and scientists who are racing to prepare for the next pandemic, and underscores the importance of universal health care in all corners of the world.

The concept of universal health care — the right to health — was not explicitly part of the Millennium Development Goals, the first set of global goals, which expire at the end of this year. But health leaders deemed universal health care so integral to public global health that that it was initially considered as the overarching health goal for the SDGs, called Goal 3.

During negotiations to create this new objective for 2030, however, a broader goal was selected to “ensure healthy lives and promote well-being for all at all ages.”

Under Goal 3, there is a specific target to “end the epidemics of AIDS, tuberculosis, malaria and neglected tropical diseases and combat hepatitis, water-borne diseases and other communicable diseases.”

Universal health coverage, Chan said on Monday at the panel event, “is a very good example to illustrate how Goal 3 can come together.”

Infectious disease control always has been recognized as an important health priority within development because outbreaks can be a destabilizing security threat, said Heather Wipfli, associate director of the Institute for Global Health at the University of Southern California, who has studied the new global goals. "I think the world has recognized how important access to care is for the most vulnerable populations and how our connectivity has put us all dependent on each others access to quality healthcare," she said.

Winning the “vigorous fight” that Sirleaf spoke of will depend critically on having adequate leadership and funding. And this could be tough, some feel, given that there are 13 sub-targets under Goal 3.

Besides Ebola, perhaps the most prominent infectious disease of this generation has been AIDS. Goal 3 builds on other efforts to end the AIDS epidemic by UNAIDS, the Joint United Nations Programme on HIV/AIDS, and PEPFAR, the US President's Emergency Plan for AIDS Relief, according to Marielle Hart, policy manager with the International HIV/AIDS Alliance. Together, these “provide a tremendous opportunity for the fight against AIDS,” she wrote in an email. “However, these targets mean nothing without the political commitment in countries to ensure these targets are implemented in a way that is sufficiently funded, in an inclusive way and leaving no one behind.”

The total cost of implementing the SDGs has been estimated to approach $3 trillion a year.

"The target to achieve Universal Health Coverage (UHC) is laudable, but UHC remains a very vague concept, and varies greatly in its definition from region to region," the medical aid group Doctors without Borders (Médecins Sans Frontières) said in a statement released on the day the SDGs were adopted.

“It is likely that both funders and the governments responsible for implementation will be overwhelmed by this list, and many goals and subcomponents risk being neglected or forgotten,” wrote Audrey Chapman, a professor at University of Connecticut, in the Health and Human Rights Journal. “After four decades of neoliberal policies that have commercialized and privatized health services, many countries will require a fundamental reform of their health system and changes in government policies in order to pursue UHC.”

Sirleaf announced that Liberia is now embarking upon a multiyear revised and expanded planning process that will include pandemic events. “We believe that our call to this as a global threat compels us all to look at the heath systems in many of our countries, particularly in developing countries, to make sure they have the response capability to be able to move against this threat that has worldwide potential,” she said.

The “Next Outbreak” is a multimedia collaboration of The GroundTruth Project and NOVA Next in association with WGBH Boston. The project is part of the GroundTruth’s global health reporting, made in partnership with the Kaiser Family Foundation.

The first pieces of the series have been published on NOVA Next, and additional work will be published in the coming weeks:

*   Correspondent Amy Maxmen profiles the young and brave doctors of Sierra Leone who are building up their national public health system after Ebola
*   Correspondent Alisa Reznick traces the mysterious origins of the Middle East respiratory syndrome (MERS) in the virus’s birthplace of Jordan
*   Correspondent Joanne Silberner asks the director-general of the World Health Organization, Margaret Chan, how prepared we are for future pandemics
*   And on GlobalPost, our global health team brings you behind the scenes to reveal what it was like reporting the stories for “The Next Outbreak”