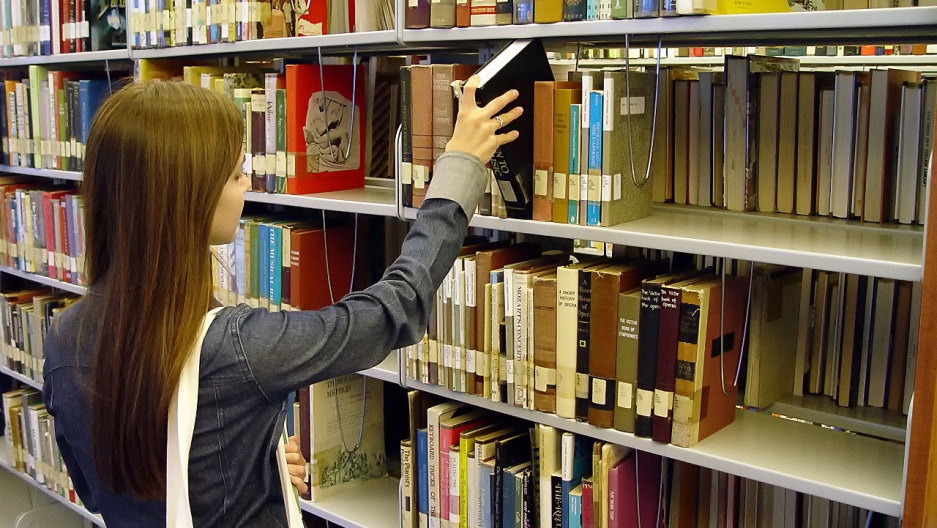 Books sit on the shelves at the San Diego City College library.

What's the most offensive book you've ever read? Would you want to see it banned?

Anne from Browns Valley Minnesota had this nomination: "The dirtiest book I've ever read was 'Choke' by Chuck Palahniuk. I would never want to see it banned because it's great writing — filthy but great!"

And for Andrew from Utah, the definition of "offensive" is a little more subtle: "The most offensive book I've ever read is 'Atlas Shrugged' by Ayn Rand. It's so offensive in its ignorant, vapid, self-righteousness, its pedantic lectures, and its innumerable logical fallacies. Mostly it's offensive because I love philosophy and Ayn Rand's objectivism is only considered philosophy by its adherents," he said.

"But don't ban it," he added. "The last thing we need to do is raise this nonsense to martyrdom status. Just roll your eyes, sigh, shake your head, be grateful you have a brain, and move on."

Not everyone agrees that a book can be filthy but great, or offensive but harmless.

But that idea — that it's important to engage with the things that make us uncomfortable — is one that animates most librarians, which is why, in honor of Banned Books Week, we asked librarians around the country what they were doing to celebrate some of the country's most contentious titles.

"We use Banned Books Week as an opportunity to celebrate freedom of expression,” said  Connie Bennett, director of Eugene Public Library in Eugene, Oregon.

According to the American Library Association, nationwide, some of the most frequently challenged books include "The Absolute True Diary of a Part-Time Indian" by Sherman Alexie, "Persepolis" by Marjane Satrapi, "The Bluest Eye" by Toni Morrison, and "The Kite Runner" by Khaled Hosseini, among others.

But around the country, librarians told us it's not politics, but rather sex and nudity that most often bring complaints from patrons.

Hamby said the Salt Lake City library recently decided to reclassify a Japanese Manga comic as "adult" after a parent complained. But he's sympathetic to the people who challenge books.

"I find people who challenge books to be good and earnest. I think they've encountered something that's made them uncomfortable and they want to save other people from experiencing that discomfort," he says.

Still he's more interested in facing that discomfort head-on and learning from it.

"I also recognize the power of confronting powerful ideas and becoming changed by them," Hamby added.

At the Bangor Public Library in Maine, Reference Librarian Clare Davitt noted that book challenges are rare these days. But when they do take place, they're no less concerning, she said.

Nothing better illustrates the power of controversial books to educate better than a story shared by Patty Furr, executive director of the Jackson Hinds Library System in Jackson, Mississippi. When she was a young librarian in rural Mississippi, a particular book was so sensational that that special measures were put in place to keep it secure.

“One book that caused a great stir in the early years when it came out was the 'Joy of Sex,'" she said. "Oh, those illustrations — nobody had every seen anything like that. The library director was very concerned that children who were in schools that were around the library might get a hold of those books — and of course they didn't belong in the hands of young children."

"So the books were kept in the director's office. One day a couple came in and they came up to the desk (and of course back then they had to present a driver's license to show they were over 18 — and they had to have a marriage license to check them out as well). They had to come up to the desk and ask for them, which took a great deal of courage. They told us that they had been married the week before and they just couldn't figure this sex thing out and they had been told that 'The Joy of Sex' was the book they needed. We went and retrieved it from the director's office and they came back a week later and said how helpful the book was to the relationship.”

We want to hear about the books you've read that ought to require multiple forms of ID to check out from the public library. Tell us in the comments below.