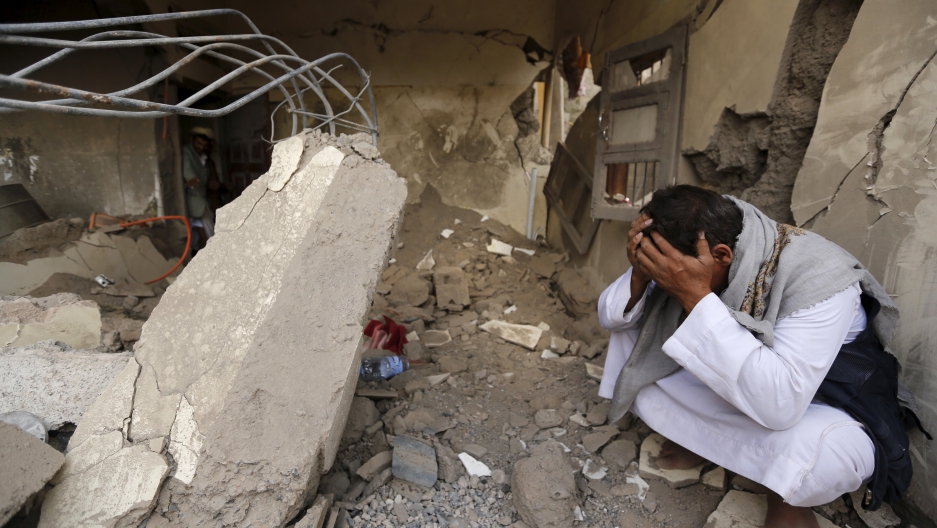 A man who lost his relatives in a Saudi-led air strike cries at the site of the air strike in Yemen's capital Sanaa September 21, 2015

A week after the Netherlands called for a United Nations-led investigation into the killing of more than 2,000 civilians in the Yemen war, the UN Human Rights Council in Geneva has approved an alternate resolution.

It was written by Saudi Arabia, leader of the coalition whose air strikes, according to a UN study, have been responsible for two-thirds of civilian deaths in Yemen.

"I knew that the Dutch draft would fail,” says Yemeni American Summer Nasser.

Summer Nasser is an American citizen who spent much of the past six months living in Yemen, threatened first by Houthi snipers and mortar fire, then by Saudi air strikes. “It is disappointing on a diplomatic level that [the US] stayed quiet about the Dutch proposal," Nasser says. "It was a great proposal that could have exposed all sides, not just one side.”

Sanaa activist Hisham Al-Omeisy shares Nasser’s disappointment. “After six months of trying to highlight our plight and failing to get global attention, we were glad an independent international fact finding mission would expose realities on the ground. ... Unfortunately, that was short lived.”

The UN resolution that was finally approved has much more modest ambitions. It pledges to provide technical and capacity-building assistance to the Yemen National Independent Commission of Inquiry, led by the Yemeni government and its president in exile in Saudi Arabia, Abd Rabbuh Mansur Hadi.

Longtime Yemen-watcher and scholar Gregory Johnsen is one of many observers who are skeptical about the even-handedness of Yemen’s COI inquiry.

This - an independent inquiry by an exiled government - should embarrass everyone involved: the US, the UN, Saudi http://t.co/QIbEIJ6cAN

That the Dutch withdrew their proposal came as no surprise to Human Rights Watch investigator Belkis Wille, whose reporting drew world attention to the human cost of the air war following the deaths of 65 Yemenis at a residential complex in Mokha. “[The Dutch] could not do it alone, they were not supported by the United States and the United Kingdom, which is the key reason that this initiative failed.”

The US Ambassador in Geneva, Keith Harper, initially supported the Dutch proposal. Neither the US State Department nor the UN Mission of the Netherlands responded to inquiries after the first Dutch draft initiative was withdrawn.

Friday, moments before the Saudi proposal was approved without objection in Geneva, US Ambassador Keith Harper said that if the human rights situation in Yemen fails to improve, he would call upon the Human Rights Council to take further action. "We must make sure that the council is held to this," Wille says.

Sultana M., a teacher in Sanaa, expects the Saudi-backed proposal to overlook more than just possible Saudi war crimes. "The problem I see is [a failure] to name all parties that are responsible for death and destruction in the country. It's not just Hadi/Saudi vs Saleh/Houthi," she observes, referring to the current Yemeni president and former president and current antagonist Ali Abdullah Saleh.

But not everyone is disappointed in the passage of the limited Saudi proposal.

Abdulaziz Al-Saadi, a resident of Aden, is looking forward to the Yemen Commision of Inquiry's findings, which he expects will focus on the crimes of the rebel Houthi forces, "in particular the abuses that happen in Aden. Five of my friends were killed by Houthi Militias and the northern army.”

While southerners such as Al-Saadi welcome the support of the Saudis defeating the Houthis, they do not fully share the aims of the Saudi-backed Yemeni government. “We want our South Arabia country back,” Al-Saadi says, referring to South Yemen, which existed as an independent state until 1990.

Long after fighting ends and war crimes have been investigated, Yemen will still need to address longstanding regional and political divisions that have been obscured by the war.