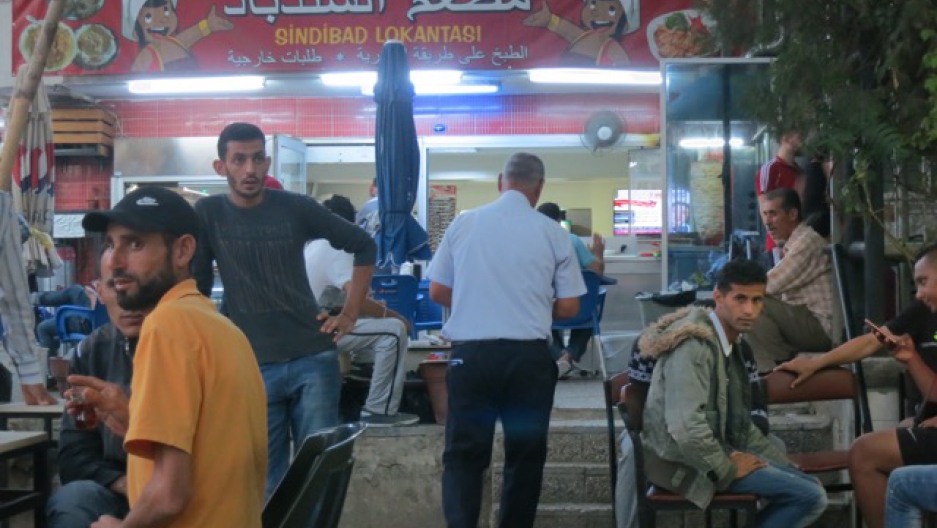 “Please, have some tea. Do you take sugar?”

“This is Syrian tea. Please, it is our pleasure.”

The Syrians I meet in the small square outside the Sinbad Restaurant in Izmir, Turkey are all fleeing an escalating war in their country they say has made it impossible for them to stay in their homes.

Asas, a fashion designer from Damascus in his early 30s, tells me that mortar shells are falling all over the capital, even in formerly “safe” neighborhoods. Recently a bomb fell during his fashion show; the before-and-after photos on his mobile phone show elegant evening gowns, then exploded plaster and hanging wires.

Nour is just 17 and is traveling alone. “If you are walking in the streets suddenly you hear deeewwww,” he says, crouching a little, “a missile or an explosion. There is no life.” His two older brothers have already gone to Europe. His parents are still in Syria and call him constantly on Skype or Whatsapp. “My father’s soul is with me,” he says.

Both are in Izmir to find a smuggler who will take them across the Aegean to a Greek island. They are among the more than 4 million Syrians to have left and part of a wave of 300,000 refugees, including Afghanis, Iraqis and others, who have flowed through Greece since the beginning of the year.

It’s a tense situation for each of them. Asas doesn’t have enough money to pay the smugglers and worries how he will be able to work in Turkey, where Syrians have no legal status. Nour checks his cell phone frequently looking for a message from his contact.  He shows me the life jacket under the table. He had expected to take a bus to the boat the night before but the hook up was called off due to iffy weather. Now he doesn’t know for sure when he will leave.

Yet they both insist on inviting me to tea. This detail — of hospitality offered in a moment of extremis — sticks with me.  I had gone to the Basmane neighborhood with some trepidation. After all, it’s the center of human trafficking, as it’s called, the business of moving people illegally across borders. Looking around me I wondered who was who, who was a trafficker, or a middleman, or a refugee. But when I sat down to interview Asas and Nour and others with my microphone held close to their faces I quickly felt at ease.

I offered to pay for the tea but they would not accept.  And when beggars came by our table, the refugees reached into their pockets for coins.  No one was turned down.

My second day in Izmir I hear from friends back in Lesbos that two refugees — a woman and child of about two — drowned that morning when their boat capsized in the sea before reaching the island. The Greek Coast Guard rescued 46 people but these two didn’t make it.

When I run into Nour again on the streets in Basmane I am thinking about this tragic news.  We sit down at a scruffy plastic table in the square and he tells me he was in touch with his contact every hour and that he hopes to leave tonight. He tells me that both his older brothers already made it to Europe — one via a harrowing five day boat trip from Egypt to Italy and the other from Turkey to Greece. They did it, and he would to. I want to hug him and say, don’t go! But of course I don’t.

After I return to Lesbos, crossing the same waters in a ferry for 10 euros round trip that Nour would have to cross in a dangerous boat for $1200, Nour texts me, asking what I know about the weather.

I also hear from Akmed, a 21 year old Syrian man who is traveling with his mother and brother. When I met them in Basmane, they had tried to cross twice already but had been turned back both times by the Turkish police and spent one day in jail. Nevertheless, they were relentlessly positive and the mother shared a puff of her shisha, or hookah, with me.  And they had invited me to tea, of course.

“Tonight we will try again. Hope for me luck.”

I last saw Nour and Akmed on Thursday. Today is Friday and I am in Sykaminia — the gorgeous fishing village facing the Turkish coast where many of the refugee boats arrive. Twenty boats with 40 or more people come ashore in just a few hours this morning filled with happy people who hug each other and kiss the rocky shore of Lesbos in gratitude for being alive and being in Europe. It is a moment of immense unvarnished hope.

I scan the groups of people walking along the sandy coastal road looking for a familiar face. Maybe I would see Nour. Or Akmed and his mother, who had chided me for not bringing them with me in the ferry.

Then I get a text.

I just want to tell you that right now I'm in Greece :)

So Nour is here, somewhere. Maybe here on Lesbos, or maybe on Chios or another island.

I still haven’t heard from Akmed.

I do hope to see them both again somewhere — and buy them each a cup of tea.