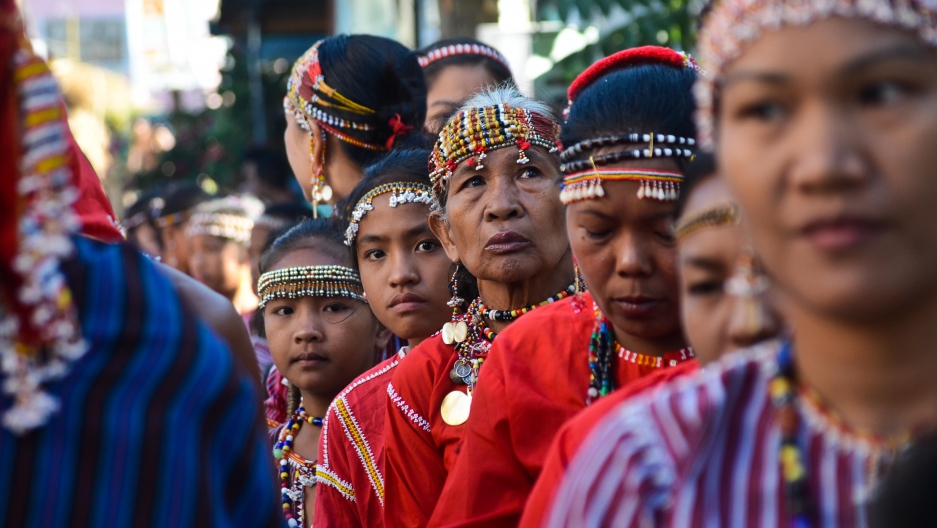 Ethnic Igorot mountain folk decked in their traditional attire wait for the start of the parade during the celebration of the Lang Ay Festival in Bontoc on April 6, 2013 in Mountain province, Philippines.
Credit: Dondi Tawatao
Share

NEW YORK — Among the world leaders who flocked to New York over the past week for the United Nations General Assembly was Elsie Lomong-oy, an elder of an Igorot tribe in Besao, Mountain Province, Philippines. In her village, the majority of people live below the poverty line, earning just $1.80 a day.

“We are not strangers to poverty and hunger,” Lomong-oy said during a UN panel on Wednesday. But since a community-driven development project began in her province, her tribe has used its hard work and aspirations to build a school, bridges, water systems — the construction of a new future.

“I see my grandchildren taking this 30-foot bridge to school that residents have built together," she said. “I see women taking up work and getting paid as much as men.”

The development project in Lomong-oy’s province, called Kalahi-CIDSS, is supported by the Philippines government as well as the Asian Development Bank and World Bank. The idea is to include residents at the outset of development projects — in the planning, management, and implementation — rather than having these decisions made from the top-down.

This partnership is a model for the type of collaborative, community-driven work that experts say is key to reaching the new Sustainable Development Goals for 2030, which include goals to end poverty and hunger, reduce inequality, ensure healthy lives for all and implement universal health coverage.

Last week, the UN formally adopted the 17 goals, known as the SDGs. The global goals will guide international development efforts for the next 15 years after the Millennium Development Goals (MDGs), set in 2000, expire this year.

As presidents and prime ministers came together to agree upon the goals, community leaders like Lomong-oy also gathered to make their voices heard. “I have made it a personal crusade to tell our story,” Lomong-oy said on Wednesday. “I want our national government to heed our call to make governance more participatory by allowing citizens like me a chance to implement projects. We have demonstrated that it can be done.”

Dr. Cindy Huang, deputy vice president for sector operations of the Millennium Challenge Corporation, a US government foreign aid agency, was also at the panel. “At least 12 out of 17 goals require an integrated approach,” she said. "Who should be at the nexus except for the people who should be empowered to develop and monitor and hold leaders accountable [for] the funds that flow into the achievement of SDGs?”

Including civil society in international development plans is not new, but their increased prominence is. Sam Worthington, president and CEO of InterAction, the largest alliance of US-based international NGOs, traveled to New York to advocate for civil society during the SDG summit that took place from Sept. 25 to 27.

“Community-led development has been around for a long time. It has, however, taken governments a while to recognize its importance and value, particularly in the area of health,” said Worthington. “The reality is, unless you have work happening in communities enabling communities to create demand to reach up to a health clinic, you do not get the participation of the most marginalized within the health system.”

An example of the importance of civil society was the role of NGOs during the 2014-2015 Ebola outbreak, said Worthington. International Medical Corps and Save the Children, both InterAction member organizations, provided direct services through Ebola treatment centers and local clinics; Global Communities coordinated burial teams in Liberia to prevent the spread of the disease through contact with the deceased.

Doctors Without Borders (MSF), though not an InterAction member, has been the primary responder in the Ebola outbreak, providing services and setting norms for the establishment of treatment centers in West Africa.

“The bulk of the community outreach done in each of the three affected countries was done by major NGOs partnering with local civic groups. Without that civil society infrastructure governments and the UN would have been unable to reach populations and bring the Ebola epidemic under control,” said Worthington.

Frontline clinics established by NGOs can become part of a government’s infrastructure in order to build up the capacity of state health systems, he said, adding that this highlights the need for partnerships across sectors.

Individuals within communities are also essential to promoting health and sustainable development.

“One of the challenges we’ve learned over the years is that simply providing access to drugs or to healthcare services is not enough. Within a community, you need a group of individuals,” said Worthington.

Women in particular are essential to promoting health and sustainable development. As family caretakers and health workers, women were disproportionately impacted by Ebola, accounting for 55 to 60 percent of those who died from the disease. Aid organizations like Global Communities emphasized engaging women in the recovery process.

“I have witnessed the power of a single woman leader in a village making the case as to why health related practices around birth are so important,” said Worthington. “This cannot be imposed from the outside.”

Along with the ratification of the SDGs, this month UN Secretary-General Ban Ki-moon also launched an updated health plan for women and children. For the first time since the plan was established in 2010, it includes adolescents.

“The Secretary-General has shown great leadership in placing adolescents front and center at a time when many of our governments have failed to do so,” said Ishita Chaudhry, founder of the youth-led organization YP Foundation, as she closed out the formal launch of the Global Strategy on Women’s, Children’s and Adolescents’ Health last week.

Cheick Traore, a youth envoy for the SDGs, traveled nearly 5,000 miles from his home in Burkina Faso to participate in the general assembly. Traore, 26, has been a civic leader in his community since the age of 12, when he became president of a youth parliament.

Speaking at the Wednesday panel, Traore said, “I would like to mention the youth leadership to end dictatorship and establish democracy in my country,” referencing the 2014 uprising that unseated Blaise Compaore, who had been president for almost all of Traore’s life. Youth have the power of an "atomic bomb," said Traore, “so we must use it to do good things.”

The power that rests within groups like youth and women is increasingly being recognized in global development, but bringing others on board who remain skeptical is still a challenge.

“We are simply ordinary people who have used our power to change how we decide and act,” said indigenous leader Lomong-oy. “This should be the road map for our future so we can finally end hunger, poverty and powerlessness.”