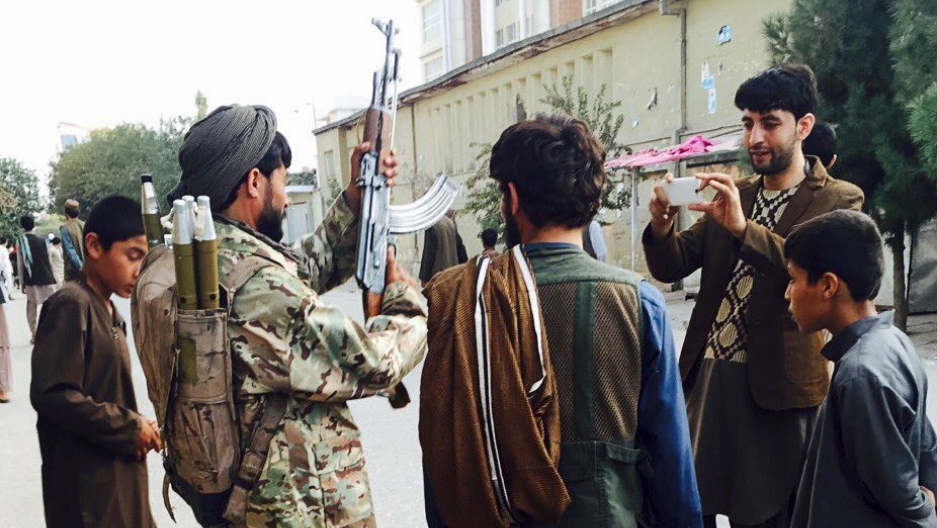 A Taliban fighter, second from left, stands in Kunduz, Afghanistan, on Tuesday, a day after the insurgents took control of the city.

The world seems shocked by the Taliban attack on Kunduz, but not GroundTruth Project reporter Jean MacKenzie.

"It's a public relations thing. The Taliban, they know very well that they can't hold this city and they really can't retake Afghanistan. So we can't make too much of their taking territory. But they have made the headlines, they're back in the world's eye view, and they are able to claim that they are still a force to be reckoned with," MacKenzie says.

But how is it possible that the vastly-outnumbered Taliban, traditionally a Pashtun group from southern Afghanistan, could even temporarily take over a northern city of some 300,000 people? MacKenzie says this isn't as sudden as you might think.

"There have been Taliban groups in the north for quite some time," MacKenzie explains. "Kunduz, especially, is ethnically divided, politically divided and the Taliban have been making inroads there for a year now. There's been an awful lot of fighting in the villages around Kunduz city all summer long, so this is not as unexpected to those of us living in Afghanistan as it might seem from the outside."

The problem, MacKenzie says, is a near-complete breakdown of the Afghan government.

"We have a two-headed monster here: we have a president and a CEO who've never really agreed on what their roles are and what their rights and privileges are."

When the presidential election was contested last year, with Ashraf Ghani and Abdullah Abdullah each claiming victory, US Secretary of State John Kerry flew in and brokered a power-sharing agreement that gave Ghani the title of president and Abdullah the title of CEO.

"This is nowhere in the constitution, nowhere in the law. So we've got a government," MacKenzie explains, "where you have two people thinking that they each have rights and privileges that the other may not agree to and they seem to be pulling often in very different directions."

This plays out in Kunduz in particular because the governor was appointed by President Ghani, while the chief of police was appointed by the CEO, Abdullah. And the two of them don't see eye to eye either.

"The chief of police is very involved with the Afghan local police, which are basically militia groups, and the governor has wanted to clean them up. And that is not a recipe for success," MacKenzie says. "The local police were created by the Americans several years ago to fight the Taliban. The chief of police insists he needs them. The governor insists they are little more than militias who are running roughshod over the local population."

So given the mess, there may actually be people in Kunduz who welcome the Taliban as a force that could bring stability.

"This is a very strange invasion. This is an attack where the Taliban are stopping to take videos of themselves with the local population, where they're stopping to take selfies of themselves witht he local population. This is not what we've come to expect," MacKenzie says. "When you say the word 'Taliban' in the international context, we have a very strong picture of turbaned, bearded men going absolutely wild. That does not seem to have happened here in Kunduz."

The attack on Kunduz seems to have been perpetrated by a very different kind of Taliban ... a group of guys mingling on the streets, taking selfies, and posting them online

“There is a sensation around the Taliban guerrilla fighters,” says Bashir Ahmad Gwakh, a correspondent for RFE/RL Radio Mashaal. He covers Afghanistan and Pakistan, and writes about the Taliban’s new Internet strategy.

“These young Afghans are just taking pictures with Taliban to maybe share with relatives and boast about it. But Taliban are using those pictures for their own propaganda and showing the world on social media that people are very excited about the Taliban ... so it’s a good technique for them. They can use the people’s enthusiasm and fascination for their own propaganda.”

The appearance of these Taliban selfies on Facebook and Twitter is one of the more striking aspects of the assault on Kunduz. It’s a new way for them to convey an impression of strength, considering that it wasn’t that long ago that the Taliban strictly banned any use of the Internet. It was considered an offense punishable by strict sharia law.

“But nowadays, the Taliban have realized that Internet is something they cannot avoid and it’s a very powerful media for them," Gwakh says. Taliban are exploiting the freedom that’s allowed on social media. Selfies and videos can just be posted without any oversight, context, or journalistic balance imposed by radio and TV stations.

In another selfie, Gwakh spotted a Taliban militant giving a high five to a local resident. It’s another sign the Taliban are adapting to and are increasingly hip to the power of social media. The Taliban used to ban clapping.

“Nobody could clap, you could only say ‘Allahu Akbar,' or ‘God is greater.’ You could only shout these holy slogans, but nowadays, young Taliban fighters have a different way of cheering. High fives are no longer forbidden for Taliban, and they think it’s very cool way to attract young Afghans. High fives, and selfies, it’s trending. Whatever they do, they want to put it on the Internet.”