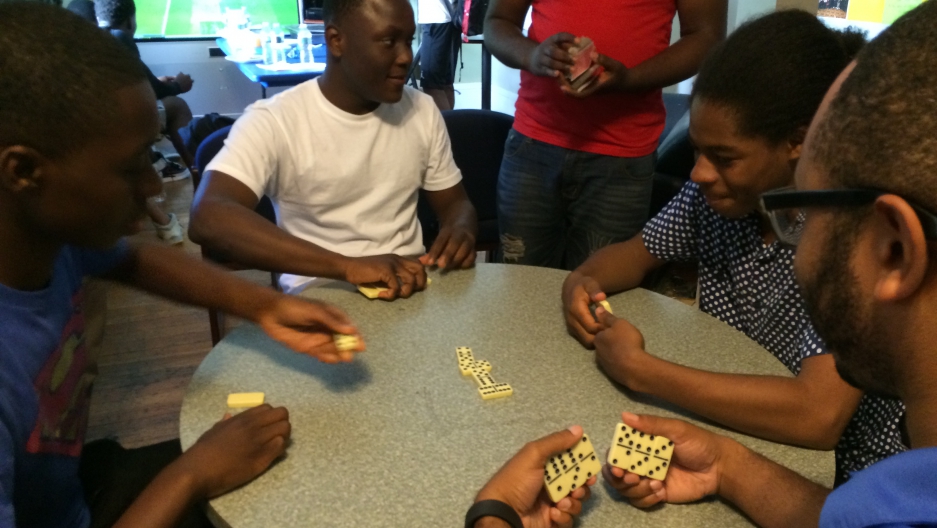 Young survivors of the 2010 Haiti earthquake gather to play Dominoes in a house donated to the Dorchester YMCA in Boston.

Seventeen-year-old Ricardo Cherry won’t talk about what happened when an earthquake hit Haiti in 2010. All he’ll say is that the uncle he was living with was killed.

“Everytime I try to think about it … it just bring me some bad dreams,” he said.

But even when he doesn’t think about the earthquake, it affects him. When he got to the US, Cherry lived in a two-bedroom apartment in Boston with his mother, two brothers and a sister. He played video games compulsively.

Cherry failed courses, or got Ds, at the local high school. His mother was working long hours at a janitorial job, and he felt guilty.

“It was just me holding myself back,” he said.

Cherry wasn’t the only teenage earthquake survivor at his school who had problems adjusting. Dorchester has one of the biggest concentrations of Haitian Americans in the country. After the earthquake in Haiti in 2010, thousands of children who survived the destruction came to the US, and many joined relatives in Boston. For some of them — especially the teenage boys, the transition was tough.

A Haitian American school counselor recognized the pattern. She sent the boys to a Haitian American staffer at a YMCA down the street. That was Reggie Jean, whose family had also taken in relatives, including his 4-year-old cousin – who was pretty open about what went on during the Haitian earthquake.

“And this little girl’s like ‘yeah, it was crazy, people were crying and I couldn’t find my mom for a long time,’” Jean recalled. “And it’s like wow, wow, wow.”

But Jean says teenaged boys generally won’t talk — and that’s led to lots of problems. So he looked for a uniquely Haitian solution. Jean convinced his Y to turn an old donated row house into, essentially, a clubhouse for the Haitian boys who needed help.

After school on a normal weekday, the place is packed with boys and has an almost frat-like atmosphere. It reverberates with the sound of dominos being slapped on tables. The boys play Haitian-style; it involves a lot of math, and a lot of bluffing.

Jeffrey Moreau, 16, dominates these games. He came here before the earthquake — six years ago — and has the wisdom and bearing of an old-timer. He said many of the boys who came more recently look up to him.

“They have seen a lot of stuff in Haiti. A lot of stuff goes down. In Haiti a lot of people don’t have no hope,” he said. “And when they come here, they become discouraged. They don’t know what to do.”

Moreau says their old house may not seem like much — but the environment is comforting. It reminds the boys of the domino games on the streets of Port-au-Prince, where players release pieces so fast and hard that they sometimes break. Moreau remembers people crowded around, watching games, swearing, yelling, and betting. He said recreating that environment has helped the boys build a new community.

“Not having that, it affects you,” Moreau said. “Coming here, you already have your group. Everybody knows and understands you and understands what you’ve been going through.”

Over dominos, the boys talk casually now and then about their memories of Haiti. Jean said he doesn’t push them.

“We’ll laugh about it, ‘oh, when I was in Haiti this time.’ But you know, I allow them to give me as much information as they want to, as we build that relationship,” he said.

Help like that got Ricardo Cherry’s grades up. He gets mostly B’s now. Cherry said remembering how he used to play dominos with his friends back home settles his mind. The games help him concentrate in general.

“Your mind is calm and you are not worrying about homework and stuff because you have all the stuff done,” Cherry said. “It also reminds me of when I was in Haiti. And how I used to play dominos with my friends.”

Cherry’s relieved. Now, he can focus at school.