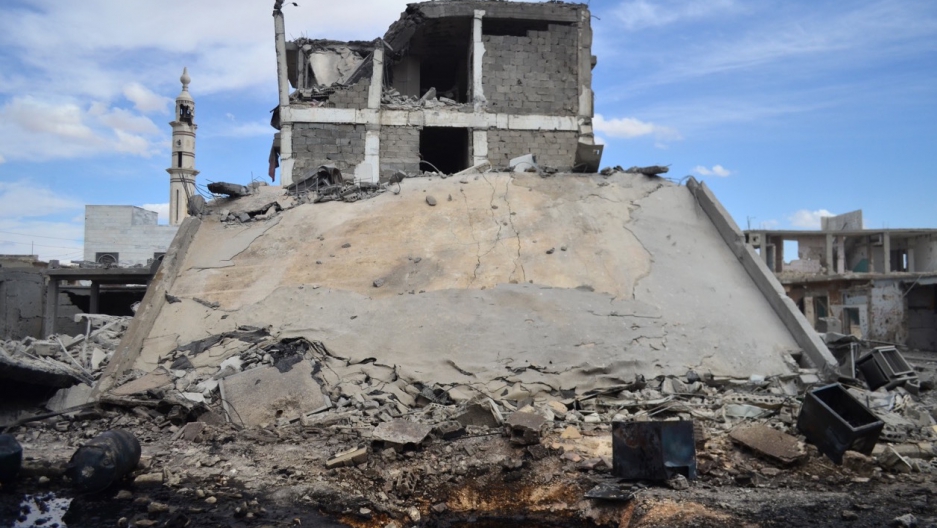 It’s still a mystery what exactly those plans are. Nor do we know whether the Kremlin is really focused on fighting the Islamic State or, as critics allege, more interested in propping up Syrian President Bashar al-Assad by bombing other rebel groups. So far, reports from outside Russia about the targets of Wednesday's strikes suggest the latter.

The Russian Defense Ministry claims its planes destroyed an array of Islamic State targets, including command posts. But Syrian opposition groups accused Russia of targeting and killing dozens of civilians and non-IS rebels.

Here’s a glimpse of what Russian public figures have been saying since Wednesday's attacks began.

Russia’s Defense Ministry released the above video Wednesday, saying the footage shows its airstrikes against the Islamic State in Syria.

While most top officials, including Putin, have pitched the airstrikes as coming to the defense of a legitimate government under attack by terrorists, others see an even more epic fight.

“The fight with terrorism is a holy battle and today our country is perhaps the most active force in the world fighting it,” Vsevolod Chaplin, a prominent church spokesman, told local media.

It might seem like a curious endorsement, but the church actually enjoys close ties with the Kremlin and often lends its open political support.

Don’t believe everything you read

Almost as soon as the attacks began, critics questioned exactly who the Russian airstrikes were targeting. Many are worried those targets could include innocent civilians, as well as Western-backed Syrian rebels.

But the Foreign Ministry’s chief spokeswoman quickly dismissed such suggestions, blaming Western and other media for spreading disinformation.

“I want to say that all of this is … the same information war about which we’ve heard many times before and which, apparently, someone prepared for quite well,” Maria Zakharova told a Russian TV network.

As is often the case in Russia, the vast majority of the political establishment quickly falls in line with whatever the Kremlin decides — and some perhaps a little too enthusiastically.

That was the case with Chechen leader Ramzan Kadyrov, a fierce Putin loyalist who also has an aggressive streak.

If it was up to him, the leader of the restive Russian region might have sent in the cavalry, so to speak, right off the bat.

“It’s too bad that it will only be a Russian air operation. But if infantry will be needed in the fight against ISIS in Syria, we’ll be the first to line up,” he said, referring to Chechen soldiers. “Our military readiness is number one.”

Don’t send in the troops

A new poll this week by a respected Moscow think tank found more than two-thirds of Russians oppose sending ground troops into Syria.

Many remember the far-flung Soviet quagmire in Afghanistan, a 10-year conflict that started in 1979 and which killed nearly 15,000 Soviet soldiers. That war also helped consolidate popular anger at the Communist regime over its cover-up of military deaths.

Putin and other officials have said ground troops aren’t part of the plan in Syria. But not everyone believes it’ll be so easy to keep that pledge.

“If we get sucked into it bit by bit, it will be a disgrace to get out of it without finishing it,” Valery Anisimov, the head of a Soviet veterans’ group, told Bloomberg Wednesday.