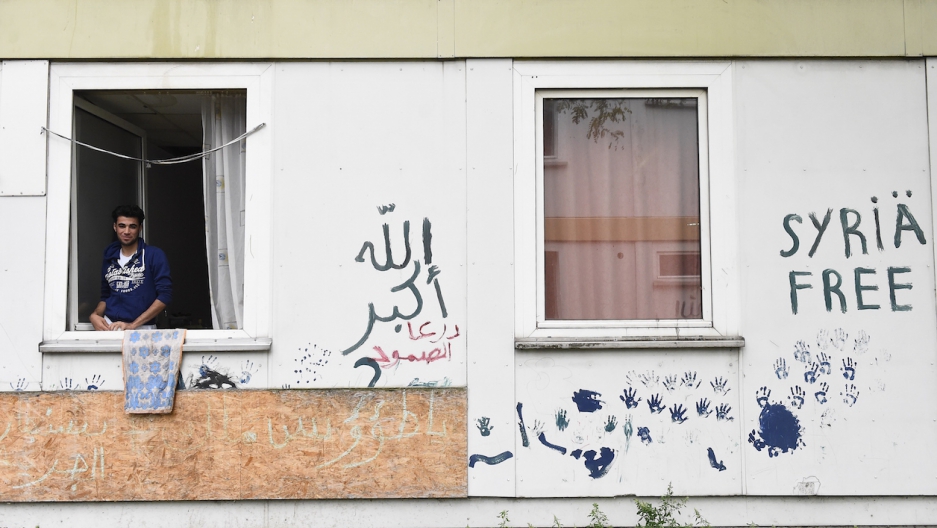 21-year-old Syrian refugee Abd Alrazak, from Homs, looks out of the window of his room at a temporary refugee home in Berlin on Sept. 11, 2015.
Credit: TOBIAS SCHWARZ
Share

A couple of weeks ago, it seemed there were few events that could conspire to make the Syrian war an even greater disaster than it already is. The entry of a second military superpower into the crowded battlefield was one of them.

Russian involvement in Syria is nothing new: Syrian President Bashar al-Assad has been a key ally of Russia and the recipient of significant military aid since the conflict began in 2011.

But the start on Wednesday of direct involvement by Russian military forces in the complicated mess of alliances on the Syrian battlefield makes the possibility of a wider confrontation — if only by accident — even greater.

It was no secret that Russia was planning to take a more active role in the conflict. Russian jets and military personnel began to arrive in Syria more than a week ago, and just on Monday, at the UN General Assembly, Russian President Vladimir Putin had called for a broad UN-backed coalition to defeat Islamic State (IS) jihadists.

The day after his speech to the UN, Putin met with US President Barack Obama to discuss a diplomatic route to end the fighting. The two found common ground in the need to tackle IS, but little elsewhere.

Washington cautiously welcomed Russia’s stated aim against IS. Just a day later, the Russian president pushed through a vote in the upper house of Russia's parliament authorizing the use of military force.

But when the bombing began on Wednesday, it became clear that Russia’s involvement in Syria probably has more to do with ensuring the survival of ally Bashar al-Assad than in defeating IS — as many had feared. The US was informed of Russia’s decision to begin bombing inside Syria via its embassy in Baghdad, just one hour before the strikes began.

According to early reports, the first day of Russian airstrikes in Syria have targeted areas where IS does not have a presence: north of Homs and in Hama province. One unnamed US official told AFP, using another acronym for IS: "We have not seen any strikes against ISIL, what we have seen is strikes against (the) Syrian opposition.”

If the reports are correct, Russia appears to be attacking rebel groups who are fighting against both Assad and IS, and who have received US support.

More from GlobalPost: Are these fighters the West's last great hope in Syria?

Khaled Khoja, leader of the Syrian National Coalition (SNC), the exiled opposition, lashed out at Russia on Wednesday.

“I condemn Russia’s military aggression in Syria today. Russia is not fighting ISIS. It is targeting civilians in communities that have rejected ISIS for the past year. It is using its military force to support the Assad regime’s war against civilians. And it risks implicating itself in war crimes,” he said.

US officials appeared taken aback by Russia’s move. Secretary of State John Kerry said he would have “grave concerns” if the strikes were not targeting IS or Al Qaeda.

The Russian airstrikes have asked an important question of Washington’s Syria policy that it will have to answer when the dust settles. The US has insisted that Assad’s crimes are a key cause of extremism in Syria, and for that reason he cannot be part of the country's future. Russia, on the other hand, argues that Assad is the best defense against the rising tide of jihadism.

If it's true that Russia is targeting US-backed, anti-Assad rebels, how will the US respond? Will it abandon the moderate rebel groups it has backed in Syria to Russian bombs? Will Russia’s decision to go all-in with the Syrian president force the US to abandon its insistence on Assad’s removal?

The pressure on the US to defend the moderate rebel groups it claims to back is likely to grow in the coming days. Indeed, it has already begun.

More from GlobalPost: The US has been bombing the Islamic State for a year. What has been achieved?

Issam al-Rayyes, a spokesman for the Southern Front — an alliance of self-declared moderate rebel groups that has received weapons from the US — called on the US to “stand with the Syrians” against Russian aggression.

“Any power helping the Assad regime for us is an enemy.  We ask the international community or so-called ‘friends of Syria’ to prove their announcements and stand with the Syrians against this Russian and Iranian invasion,” he told GlobalPost on Wednesday night.

If the first day of strikes is anything to go by, groups fighting under the command of the Southern Front (an estimated 35,000 fighters in the south of the country) could soon be on the receiving end of Russian bombs.

The danger of confrontation between Russia and the US is lessened by Washington’s desire not to become embroiled in Syria directly — despite its liberal use of bombing against the Islamic State.

But the situation is more precarious than it has ever been. The two sides have different ideas about how this conflict will end, and it's not hard to envision how each could be dragged deeper into the fighting. Russian and American jets now share the skies above Syria.

GlobalPost Senior Correspondent Richard Hall is based in Beirut, Lebanon.