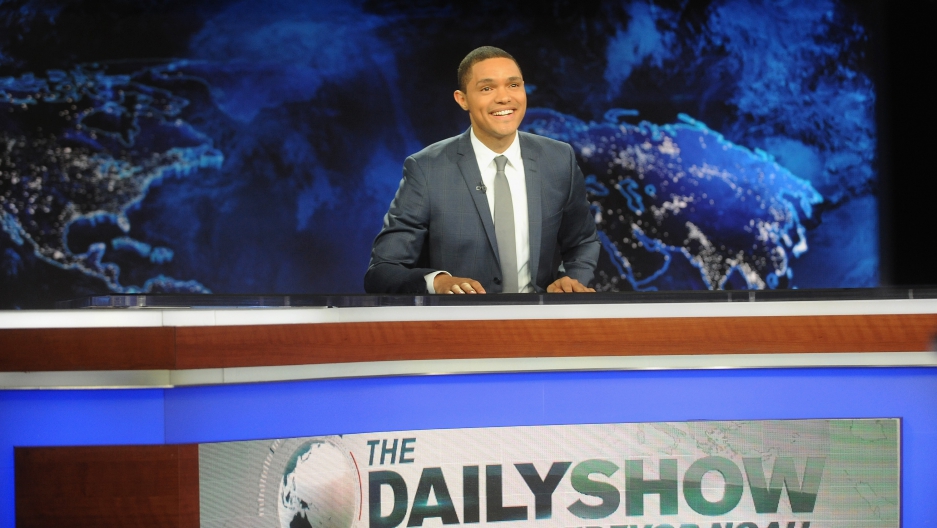 JOHANNESBURG, South Africa — As Trevor Noah prepared to host his second episode of The Daily Show, South Africans were still waiting to see his debut.

New episodes air a day late in Noah's homeland, due to the time difference. But proud South Africans were already celebrating #TrevorDay after waking up Tuesday morning to a torrent of social media reaction and reviews (never mind that the bulk of them were mixed on Noah's performance).

Many here have seen a YouTube clip of Noah's opening monologue, while a rarified few South African celebrities attended a special afternoon screening in Johannesburg.

#TDSTREVORNOAH private screening is underway! Should #TrevorDay be a public holiday? He's done us proud after all. pic.twitter.com/SoIeS5B7nl

And so even though most South Africans were still anxiously waiting to watch the full show at 9 p.m. Tuesday, when it debuts on Comedy Central Africa, the local verdict was already in: Noah killed it.

"If you're a South African then Tuesday is the Rapture," the Johannesburg-based Times said, describing Noah as "our comic Messiah."

While South African actors have a tendency to lose their accents after moving to the United States (see: Charlize Theron), the local crowd will be happy to hear that Noah still sounds like one of them.

"This is surreal for me," Noah said in his Daily Show introduction. "Growing up in the dusty streets of South Africa I never dreamed that I would one day have — well, two things really: an indoor toilet and a job as host of The Daily Show.

"And now I have both. And I'm quite comfortable with one of them."

I proclaim to the world to know ,I come and grew up in the dusty streets of South Africa sweet sweet @Trevornoah U are one in a million...

That opening joke fell flat with some of his countrymen, though. Some felt Noah was reinforcing dated stereotypes, while a few others didn't find the joke funny, given that some South Africans still don't have proper toilets.

@Trevornoah dusty streets of south Africa and indoor toilet ne Trevor #lambasting your home country in USA how does it feel like?

Watching #thedailyshow with Trevor Noah. Did not like the "indoor toilet" joke but the rest of his monologue was good.

Y @Trevornoah had to make the outside toilet joke?Americans already think we have lions in our backyard, nw they think we sh!t in a hole?lol

Dreams do come true African Child.Congratulations @Trevornoah don't forget to send money to yo Mom so that her fridge remain full #DailyShow

Many have anticipated that Noah's upbringing in apartheid-era South Africa, born to a white father and black mother, will give him a keen outlook on race in America. Race has already been the subject of some of Noah's most searing satire about the US, and he's said recently that he expects his own life experience to affect the direction The Daily Show takes.

There has also been talk of Noah bringing a "global perspective" to the show — the subject of a joke by correspondent Jordan Klepper during a segment Monday night (ostensibly, Klepper was talking about John Boehner's replacement in Congress):

South Africa's foreign minister, in New York for the United Nations General Assembly, visited Noah ahead of his debut to "convey in person the well wishes of the South African government and people" — and to take a photo with the star. "Trevor Noah is assuming an important global platform through which he will be flying the South African flag high," Maite Nkoana-Mashabane said, according to the government’s Twitter feed.

While new to American viewers, Noah is well known in South Africa for his sold-out comedy tours and as the one-time host of a show called “Tonight with Trevor Noah.”

A Johannesburg newspaper compiled a timeline of Noah's rise to fame, starting in 2002 with a small role on a local soap opera called Isidingo, where he played a gangster. Among his other early TV appearances, Noah co-hosted a dating game show and was runner-up in a local version of “Dancing with the Stars.”

All of this might have helped with his smooth and comfortable appearance in the Daily Show host chair.

Less known in South Africa, however, was Jon Stewart's Daily Show, which only really gained widespread attention here when Noah became a contributor to the program last year.

But, as Noah said in his monologue, he has big shoes to fill.

"Jon Stewart was more than just a late night host. He was often our voice, our refuge and in many ways, our political dad," Noah joked.

"And it's weird, because dad has left. And now it feels like the family has a new stepdad ... and he's black."