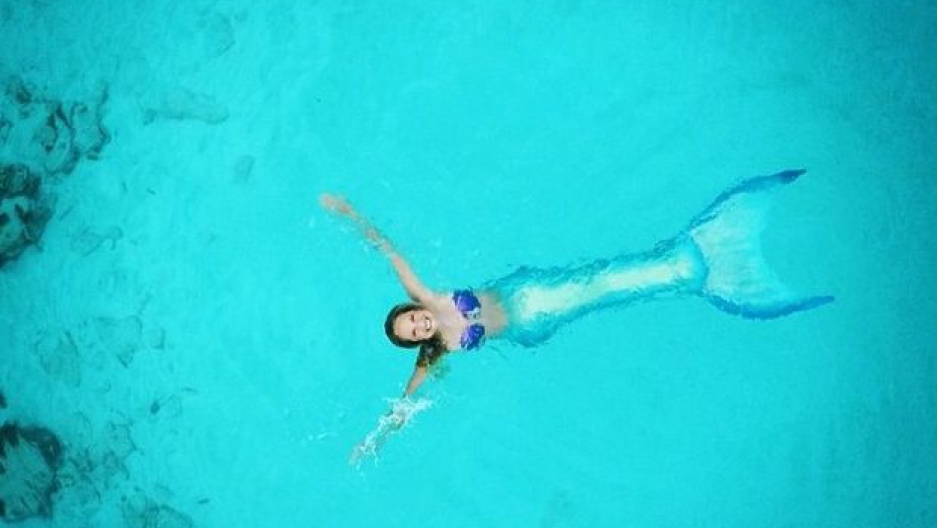 Mermaid Linden in the turquoise seas of the Bahamas.

The US Bureau of Labor Statistics will release the latest unemployment numbers on Friday. The breakdown of who is and isn't working won't include stats about the mermaid economy.

But according to Fast Company magazine, there are about 1,000 people working as full-time mermaids and mermen in the United States. Linden Wolbert is one of them.

“Without my tail, I’m about 5-foot-4, so I’m pretty tiny,” says Wolbert. “My tail is beautiful and very realistic — it’s a silicone prosthetic made by special effects artists in Hollywood. It was designed to look, move and completely imitate the look of a real fish or a mermaid.” Tails can run anywhere from $500 to $25,000 and beyond.

As a full-time working mermaid, Wolbert performs at parties, weddings, resorts and hotels. Her celebrity clients include the likes of Justin Timberlake and Jessica Alba.

“Being a mermaid professionally has been a very interesting path,” she says. “I started off doing this 10 years ago and created a business for which there was nothing to model after. I truly had to create it, build it, dream it, paint it and sew it. It has been challenging to say the least, but I’ve finally come to a place where I feel very content in what I’m doing — I know there’s nothing else that I could ever do. And it does pay me some nice sand dollars, and I’m very happy about that.”

Unlike Ariel from “The Little Mermaid,” Wolbert has blonde hair and blue-green “ocean eyes.” She says that the children she entertains are constantly inquiring about the Disney princess.

“A lot of children ask me, ‘Do you know Ariel? Is Ariel your sister?’ I often tell them that she’s a very dear friend of mine, but we’re not related,” she says.

Aside from entertaining, Wolbert also takes her silicon tail out for swims in the Caribbean, in coral reefs, and underwater caves. She also frequently uses her profession as a way to raise awareness about ocean conservation.

“Since my ancestors were swimming through the Seven Seas, there has been a lot of stress on our oceans,” she says. “There’s noise pollution from human interaction with our oceans — from cargo ships and sonar pings and all kinds of other noise disturbances that hurt echolocation and sound utilization that different marine mammals use. There’s also the stresses of different pollutants — we have plastic pollution, like the Pacific Gyere, which is a huge area that’s full of plastic. Mermaids and mermen are swimming through a lot more plastic than they used to.”

Wolbert says she works with a group call Reef Check Worldwide, which is dedicated to the conservation of tropical coral reefs around the world. If current carbon dioxide emission trends continue, nearly every coral reef on the planet could be dead by the year 2100, according to a report from Science magazine.

Though she hasn’t seen any talking crabs in her underwater travels (not yet, at least), Wolbert says she’s encountered her fair share of strange and majestic things in her life as a mermaid.

“Off the coast of Puerto Rico there’s an island called Vieques, and I was able to swim in a bay of bioluminescence,” she says. “To see creatures underwater and at night in complete darkness, to see their outlines glowing in this bioluminescence glow ... was probably the strangest, yet most beautiful, magical and enchanting thing I’ve ever seen.”

Though she knows mermaid life isn’t for everyone, it’s been a dream come true for her.

“I believe that everybody should follow their heart and their dream in whatever they want to do,” says Wolbert. “If that involves wearing a magical, mythical mermaid tail and swimming through the water — whether that’s a swimming pool, a puddle, a fountain or the ocean — to live and experience your fantasy and share that with the world in your own special way, I say go for it. It’s an incredible way to live life and a magical way to experience the world. There’s nothing more magical then looking around, and no matter who you look at, a smile comes over their face when you make eye contact. That’s the wonder of being a mermaid.”