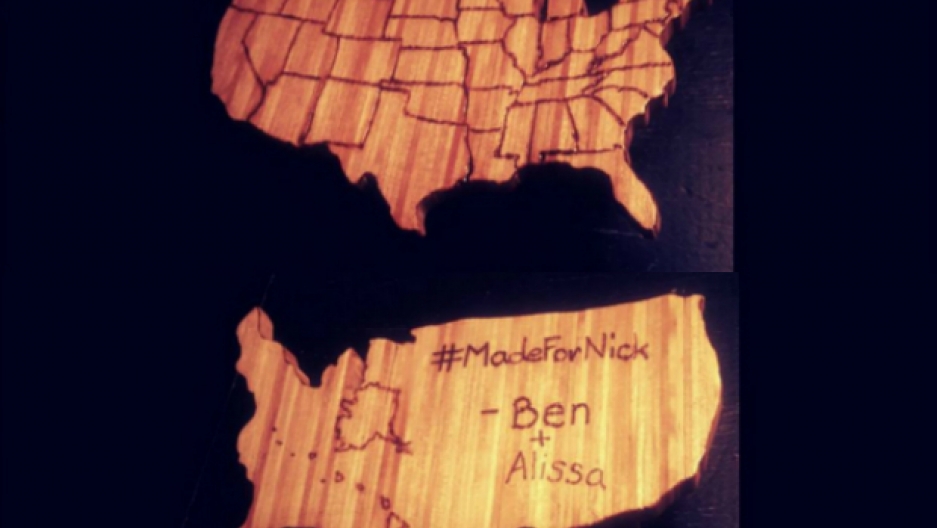 A few weeks ago, we launched Nick Offerman's Ultimate Popsicle Stick Throwdown, challenging listeners to make a sculpture out of popsicle sticks and post a picture with the hashtag #MadeForNick. We've already received some truly creative entries, but one from Ben Gannaway and Alissa Cullen of Columbus, Ohio, stood out. They took the unusual approach of making a solid board of glued-together popsicle sticks, which they cut into the shape of the USA. Using a wood burner, they traced the shapes of the states to complete their popsicle stick map.

I entered the #madefornick ultimate popsicle stick throwdown challenge form #studio360. The theme I picked was #america. And what's more American than America? Go online and vote for your favorite! And hopefully it's mine ; http://www.studio360.org/story/nick-offermans-ultimate-popsicle-stick-throwdown/ This was made by gluing the popsicle sticks together on their flat side and cutting out the shape then with a wood burner, burned the Statelines in. #nickofferman #woodworking #handmade #etsy #etsyshop

We had to know more, so we gave Ben and Alissa a call to hear about their process. Ben, it turns out, is an accomplished woodworker who sells his stuff on Etsy (his most popular items are rings made out of silver coins). Alissa is a student at Ohio State University, and about as big a Parks and Recreation fan as you could be (she's seen the whole series three times through).

You can imagine, then, how excited they were when they found out Nick Offerman was coming to do a show at Alissa's college, the very same week that they were finishing their project. They brought the sculpture to the show, and Alissa had the guts to walk up and leave it on the stage for Nick, who, apparently, gladly accepted.

Will this give them an edge in the competition? Difficult to say. Should you feel inspired to get your own submissions in soon? Most definitely. The deadline is October 5th at 11:59 p.m.