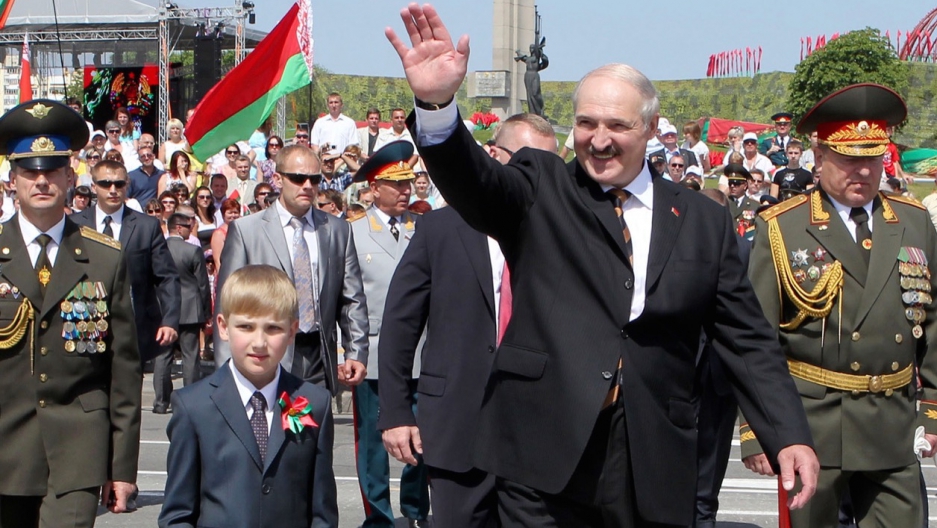 Belarus President Alexander Lukashenko and his son marching in a military parade in Minsk, on July 3, 2012.
Credit: Nikolai Petrov
Share

The Eastern European strongman came to New York with his 11-year-old son Kolya — often referred to as Lukashenko’s very own “Mini-Me” — as his plus one. Lukashenko is a shoo-in for a fifth term as president next month and, as the Guardian reports, his father-and-son trip overseas may have been aimed at giving the kid a taste of the future.

Sure, it may be bizarre. But it’s become a Belarusian pastime. Little Kolya has spent years in the public eye, accompanying his stern-looking father to everything from military parades to ... well, the United Nations.

Given Lukashenko’s unsavory reputation as “Europe’s last dictator,” thanks to the stifling political climate in Belarus, some observers have even called Kolya a “dictator in training.”

Lately, though, the chatter has focused on whether Lukashenko — whose capital, Minsk, has twice hosted peace talks on the Ukraine crisis — is looking to cooperate with the West. He even freed six political prisoners last month as an apparent gesture of good faith before next month’s presidential vote.

But given Lukashenko’s record of suppressing dissent and crushing political opponents, it’s unclear what it all means.

It’s unlikely any of these moves will push his son out of the picture.

Ties improving between the #EU and #Lukashenko’s #Belarus http://t.co/t6WItSn1Fs via @washingtonpost pic.twitter.com/tyhaFL5wrS

All work and no play could make Kolya a dull boy. Not to worry, though: It’s not all politics and diplomacy. Playing catch with Dad may not be a common pursuit in Belarus, but there’s always potato-harvesting.