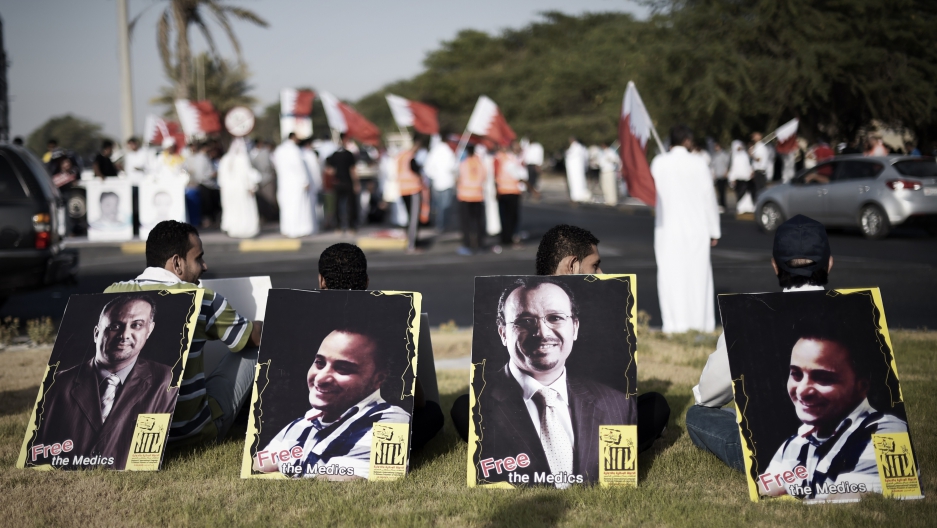 Bahraini protesters hang on their backs portraits of jailed medics during an anti-government protest in the village of Diraz, west of Manama, on June 6, 2014.
Credit: Mohammed Al-Shaikh
Share

JAW PRISON, Bahrain — I’m in prison in Bahrain, one of 20 medics sentenced to jail by a military court four years ago this month after we had treated injured protestors during the demonstrations for reform in early 2011.

We were tortured and forced to confess to crimes we hadn’t committed. I’m a consultant orthopedic pediatric surgeon. I trained in Ireland. I was operating on a child on March 17, 2011 when soldiers came to the theater to arrest me. It was a Thursday afternoon.

They took me to a military facility where I was beaten and tortured. I lost consciousness several times. I was sexually molested and forced to eat feces. After three weeks of being blindfolded and handcuffed I was forced to sign a confession I hadn’t even read, to crimes I hadn’t done. I wasn’t allowed to see a lawyer for any of that time.

Over 50 medics were arrested and tortured and 20 of us were given a mass trial in a military court. We were all found guilty on charges including ludicrous things like stockpiling weapons and trying to overthrow the government. The public prosecution claimed I was somehow the medics’ ringleader. Our verdicts were announced in September 2011.

I was originally given 15 years, later reduced to five years after an appeal in an unfair civilian court. The US-based organization Human Right First was in the appeals court and reported how the judge refused to hear evidence about my torture or the torture of my colleagues.

At the time the United States government said it was “deeply disturbed” about what had happened to us. The State Department had sent observers to our trials, and they saw for themselves how unfair the [hearings] were.

American officials can’t claim they didn’t know the truth about what happened to us. [The US government] knows no one in the Bahrain military has been brought to account for the torture.

The rest of the medics tried with me have now all been released from jail, but the prisons here are still full of political dissidents.

Prison life is hard. Jaw Prison, where I am, is horribly overcrowded already and more inmates are arriving every week and the unrest continues. In March mass disturbances broke out and many prisoners were attacked. With hundreds of others, I was forced to sleep outside in a tent for months afterwards. There are so many in jail here who aren’t allowed access to the medical treatment they need.

Sometimes it seems a long time to the end of my sentence. I’m losing the skills I need to do my job, to perform surgery on children. It’s not something you can just pick up easily again after not doing it for years. There are young patients who need my skills, and who want me to continue treating them.

The State Department says Bahrain has made “meaningful progress on human rights.” I can see all around me, every day, how wrong that is. I see hundreds of people who shouldn’t be in prison, many of them have been tortured, none of them given a fair trial.

Four years ago I treated injured protestors and told the media the truth about what was happening in Bahrain. I don’t regret doing my duty as a medic, but I’m disappointed Washington hasn’t done its duty in standing up for us.

Dr. Ali Al Ekri is a consultant surgeon who trained at the Royal College of Surgeons in Ireland. He was among dozens of health professionals arrested in Bahrain in 2011. He was sentenced to 15 years in prison by Bahrain's security court for alleged involvement in the country's uprisings. The sentence was later reduced to 5 years.