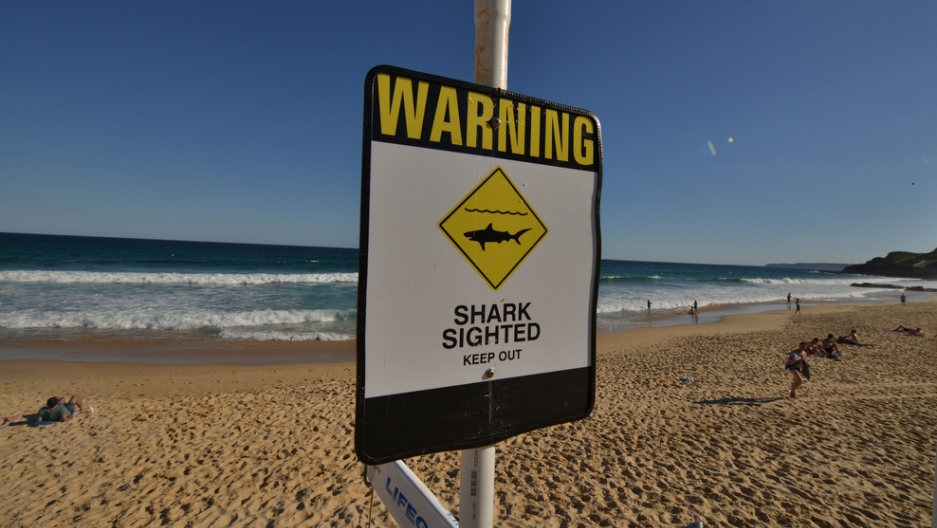 A sign posted on a beach in the Australian city of Newcastle on Jan. 17, 2015, warns swimmers and surfers that a shark has been spotted off the coast.
Credit: PETER PARKS
Share

Australians typically love going to the beach, but many will be hesitant about dipping their toes in the water this summer after a sharp rise in the number of shark attacks along the country's east coast this year.

There have been 13 attacks — including one fatal — off the coast of New South Wales so far, compared with  19 attacks nationwide for the same period.

There were just three attacks in NSW in 2014.

So nervous swimmers and surfers will be relieved to know that 70 shark experts from around the world have gathered in Sydney this week to discuss how modern technology could be deployed to prevent attacks.

(Existing measures to deter and detect sharks in Australia include nets and aerial patrols, but they are only used at some beaches. The nets, like the one below, have been criticized as being ineffective and dangerous because they often entangle other sea creatures.) On the table is a range of options the NSW state government says could be trialed this summer.

Among them are underwater electric fences and plastic barriers that theoretically stop sharks from getting too close to shore, but don’t bother other marine life.

Also under consideration: shark-detecting "smart" buoys that send a text message to lifeguards alerting them that a shark is nearby and that they need to get swimmers out of the water, and a real-time tracking app that smartphone-using swimmers and surfers could use to see if there are sharks nearby.

Australia is renowned for its deadly wildlife — it's home to some of the most venomous snakes and spiders in the world — but shark attacks tend to get more attention.

Historical data shows Australia has recorded the highest number of fatal shark attacks in the world — beating the United States and South Africa.

That's bad news for the local tourism industry, which is an important driver of the Australian economy.

If foreign visitors are too scared to enjoy one of the country’s biggest draws, its pristine beaches, they might take their bathing suits and dollars elsewhere.

That's led to some drastic  — and gruesome — responses in parts of the country.

The controversial strategy sparked public protests and was condemned by scientists, who said it could threaten the survival of endangered species and interfere with the marine ecosystem.

“If they take enough sharks out of the water, sure it’s going to reduce shark attacks,” George Burgess, a shark expert at the Florida Museum of Natural History in Gainesville, told Nature.

“If you get all of them out of the water you’ll never have a shark attack again.”

The Western Australia cull was discontinued after the Environmental Protection Authority opposed an application to extend the program for three years, but there have been calls since then for a similar measure in NSW.

But studies show most people are opposed to the idea.

"The only people who are talking about killing the sharks usually is the political class. The public is sophisticated and the public generally gets it, that there are better alternatives that will make them safer."

But experts concede there is no foolproof system to prevent attacks.

And in any case you're much more likely to drown than be killed by a shark.