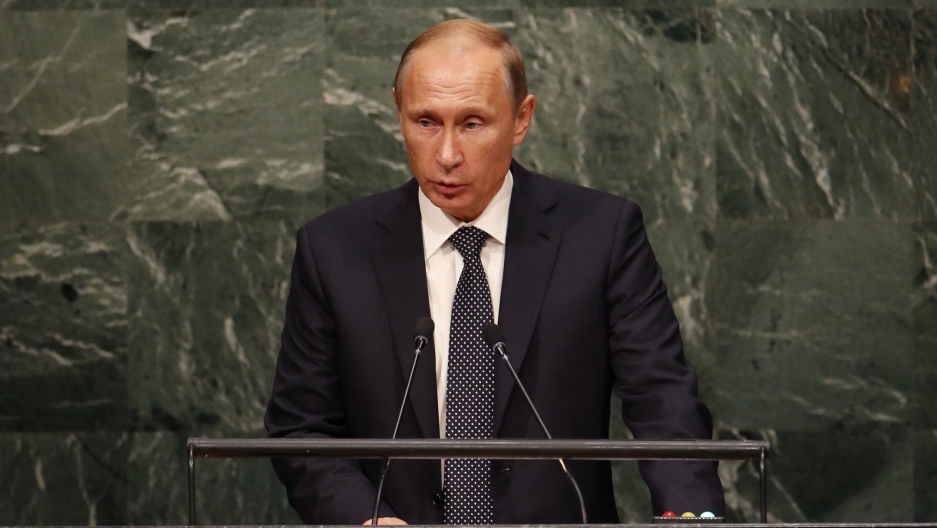 After 10 years, it's the return of Russian President Vladimir Putin. He spoke at the UN today and if you had been following social media in Russia, you'd definitely know.

Reporter Charles Maynes, who listened to the speech from Moscow, says the speech came at a crucial time for Putin. So much international focus has been on his invasion of Ukraine. Maynes says it's isolated the leader on the international stage. The speech offered him a way to lead. Russia media certainly seized the opportunity.

"There was a tele-marathon here," he says. "All the channels provided build-up to the speech. They had talk shows depicting what Putin would say during the speech."

The same shows also parsed the 42-minutes speech made by President Barack Obama. Although, as one Russian commentator said, "No one cares what Obama has to say but the whole world is waiting to hear what President Putin has to say."

So what did Putin have to say? And was it any good?

Maynes says Putin was good. He talked about a host of issues, from care of the environment to Ukraine to swipes at the US. "He's a very capable speaker," he says. "This speech was very measured. My sense was that he was trying to get smaller countries that maybe feel ignored by the UN to get on board with Russia."

As for Syria, Putin expressed his support for Syrian President Bashar al-Assad. That puts him directly at odds with the US. But he doesn't seem to care.

Putin's visit to New York comes shortly after Iraq announced a new intelligence-sharing agreement between itself, Russia, Iran and the Assad government to counter ISIS.

According to Michael Gordon, the agreement came as a surprise to the US. President Obama is meeting Putin on the sidelines of the UN General Assembly.

“One of the aims of the meeting is to coordinate better on Syria and here you have an agreement which was not coordinated with the United States,” says Gordon.

What's more, this latest move by Russia comes after its military deployment in Syria earlier in September. This too, was not coordinated with the US. All this has left the US wondering what Russia's intentions are in Syria.

"Russia is looking perhaps to help resolve the Syrian conflict on terms favorable to itself, but it's also looking to project influence and military power in the region," Gordon says. "The United States is leading one coalition [...] but now Russia is setting up a rival coalition."

It remains to be seen how this intelligence sharing agreement will be implemented.

Meanwhile, Gordon points out that the influx of Syrian migrants and the rise of ISIS has put the situation in Syria back on the global scene.

"The Americans have done a course correction on their policy," he says. "They're now interested in working with Iran [...] and they're actively trying to work with the Russians."

One would hope the renewed attention would result in a respite for the Syrian people.