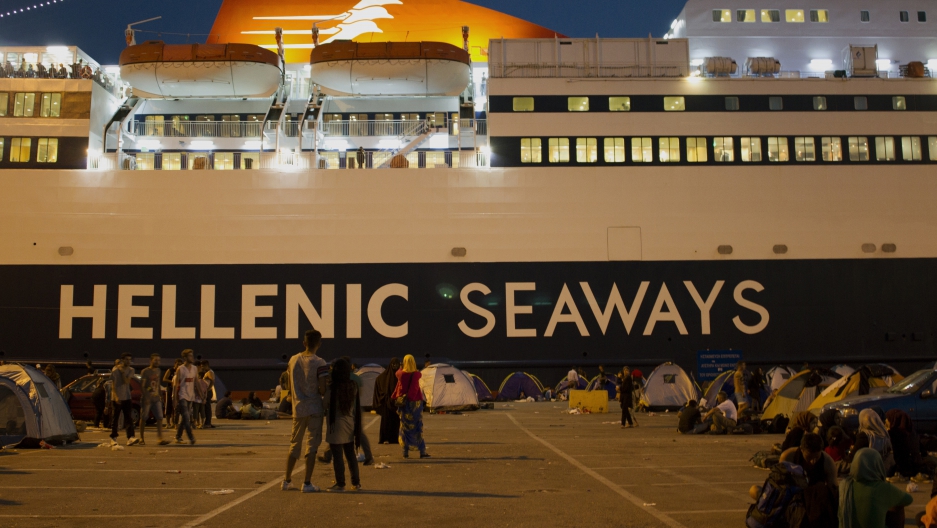 Refugees set up tents at the main port. They're hoping to get tickets for a ferry like this that will take them to Greece.

Mursal Rahmatii, a petite, feisty 21-year-old from Kabul, Afghanistan, and her family landed on the northern shoes of the Greek Island of Lesbos one morning earlier this month. They spent eight hours walking towards a registration center outside the capital Mitilini.

“We are just happy, It’s relief!” she said. “From the first sight, we felt relief.”

Mursal’s leg had started to bother her — the walk was long and she was carrying a waterlogged backpack — but she said at that point she hardly noticed how tired she was.

To get to that point Mursal and her family crossed four countries and covered nearly 3,000 miles. Traveling from Kabul, they went down into Pakistan, across into Iran, over into Turkey and across to the country’s Aegean coast before piling into an inflatable rubber boat that finally took them to Greece.

A few hours later they reached a registration center and quickly realized that not only was their journey far from over, but they were stuck in a logjam of sorts.

Earlier this summer, Syrians were the majority of people risking the journey to Europe. But now the makeup of the inflatable boats reaching the shores of the Lesbos has changed: Iraqis, Iranians and Bangladeshis are arriving in greater and greater numbers.

Regardless of this shift, Syrians are still processed relatively quickly while all other nationalities are directed elsewhere: to Moria, a huge complex surrounded by concrete walls, high chain link fence and barbed wire. Here processing can take days.

A cafe along Mitilini’s idyllic historic port has become a base of sorts for migrants and refugees who are now mostly from countries other than Syria. Mursal’s family camped out by one of the windows while they waited for ferry tickets to the mainland. The owner let them charge their phones and use the WiFi. Here, Mursal, her sisters and brother basically kill time on Facebook and Viber, chatting with friends and family back home.

"We changed a lot, we didn’t eat so much when we were in the desert,” she said, explaining she’s lost weight since leaving home. “So I send my picture. They said you look so ugly!”

Mursal is in good spirits, but she admits the long journey has been difficult. Her shoes, new when she left Kabul, have been worn through and she’s down to just one set of clothing.

“This laugher,” she explained, “is just because I’m hopeless from life. I can’t do anything, I can’t go back and I can’t go on.”

Along their nearly 20-day journey, Mursal’s family was shot at by Iranian border guards, loaded into the back of a pickup truck for a daylong drive across a desert in Iran and then held for ransom by the smugglers who they thought were helping them.

“They [held] us to give more money,” Mursal explained, “the door was locked, no window bathroom, no eating, nothing was there.”

Eventually the family decided to pay them off, parting with most of the money they had brought with them for the trip.

Now, nearly two weeks later in Greece, they’ve almost completely run out of money. So while waiting for ferry tickets, staying in a hotel isn’t an option. Instead, Mursal’s family bought a tent from a local tourist shop and set it up at the main port. The port’s parking lot is filled with these tents. Garbage is everywhere and the dumpsters are overflowing.

Resting inside her family’s tent, much of Mursal’s enthusiasm and excitement had faded, leaving her feeling defeated that after so much travel she had wound up stuck on a Greek Island.

“At night it is so cold,” she said, “we don’t have water, anything, and everything here is so expensive."

Now, she said she was beginning to worry that Europe may be more accepting of Syrians than families like hers. In Greece, Mursal and Omayid received transit documents almost identical to what Syrian arrivals receive; the papers allow them to pass through Greece on the way to northern Europe.

But when it comes to declaring asylum, while the EU laws are in flux, experts suspect Syrians will receive preferential treatment. Meaning Mursal and her family could find themselves in more bureaucratic gridlock.

Mursal said she was already hearing rumors that Afghans won't be allowed to stay in Germany. Now, a goal that was so clear two weeks ago — to reach Europe — has suddenly become more complex and confusing than she expected.

But she says she understands why Europeans may be more sympathetic to Syrians.

“The Syrian war is new."

But she says Afghans have being going through the same hardships for decades now and that should be worth something.

After finally getting on the ferry to the mainland, Mursal and her family are currently on their way from Austria to Denmark. Once there, they say they’ll try to win the right to stay.

"I don’t know exactly,” Mursal said when asked what she expected over the next few weeks. “I don’t know what we can do.”