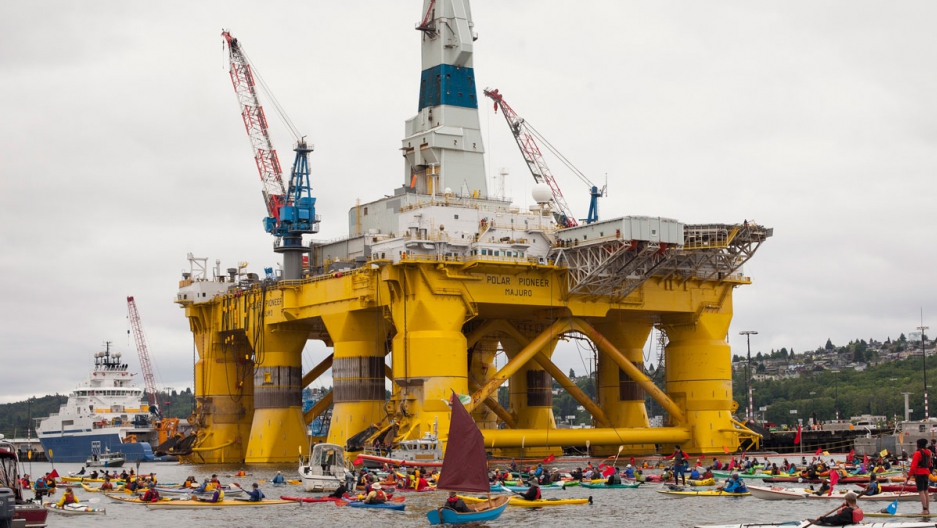 Demonstrators protest against Royal Dutch Shell near the Polar Pioneer oil drilling rig on May 16, 2015, in Seattle.

After years of planning, billions of dollars invested, pitched battles with environmentalists and a crucial green light from the Obama administration, the news Monday from the energy giant Shell was unexpected, to say the least.

Shell is scuttling its effort to drill for oil in the Arctic Ocean. The company says many reasons factored into its decision.

But the tipping point for Shell might have been something the company has not mentioned — a tweet from Hillary Clinton.

The Arctic is a unique treasure. Given what we know, it's not worth the risk of drilling. -H

That, at least, is what BBC business editor Kamal Ahmed believes.

“I don’t think it was the absolute decider,” Ahmed says of Clinton’s tweet this summer, that if she were elected president she’d reverse the Obama administration’s approval of Shell’s Arctic drilling plans.

But, he says, the tweet “just raised the issue that the political uncertainty, whatever President Obama had said, was not going to go away.”

That political uncertainty has been created by strenuous protests in the US and internationally against the Shell plan and oil and gas drilling in the Arctic in general.

Opponents point to the treacherous conditions of the Arctic and the possibility of irreparable harm to the region’s delicate ecosystem in the event of an accident, as well as the overarching threat of climate change from the burning of fossil fuels like oil and gas.

In pulling the plug on its first foray into the region, the company did not back off its contention that oil and gas drilling can be done safely in the Arctic. But observers and even company insiders believe the threat to its reputation was starting to sting.

In recent years Shell has tried to portray itself as a responsible environmental steward that recognizes the realities of climate change, and The Guardian quotes one company source as saying, “we were acutely aware of the reputational element to this program.”

Ahmed believes the negative publicity and political uncertainty factored into Shell’s decision, but the main reasons were much more straightforward.

Bottom line, he says, after a summer of exploratory drilling in the Chukchi Sea off Alaska's north coast, Shell came up empty. The company’s well, he says, “had turned up not much at all, in fact close to zero.”

Couple that, he says, with the global collapse of oil prices — they’re currently less than half what they were two years ago — and that the company was already struggling to manage a much bigger challenge with its takeover of the global oil and gas company BG Group.

“I think they made a decision that the Arctic was just a stretch too far,” Ahmed says.

Ahmed says environmentalists will no doubt chalk up Shell’s decision as a victory, but he says they’ve by no means won the war over oil and gas development in the Arctic.

“There are large parts of the Arctic already being explored,” he says. “Russia, Canada, America and Greenland all have areas in the Arctic where they want to see exploration, (and) BP, Conoco and Exxon all are involved in that. And that will certainly go ahead.”