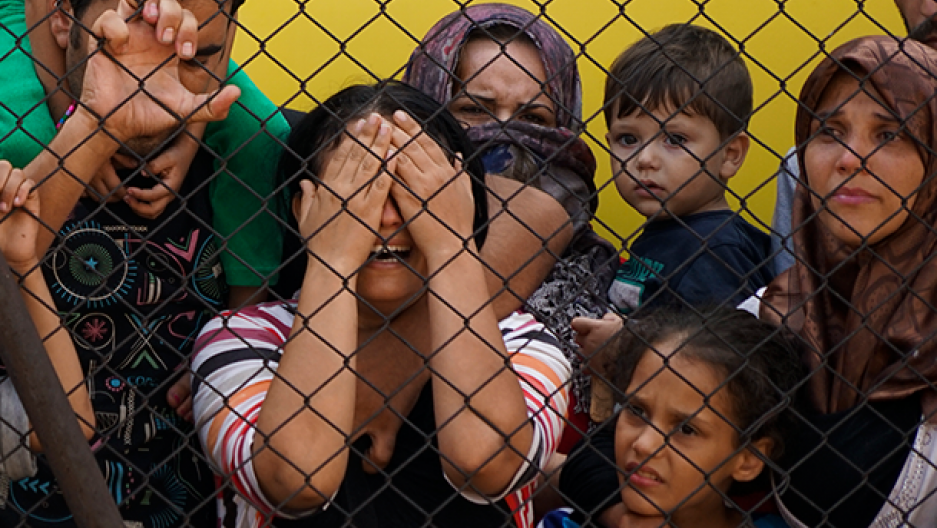 Syrian women and children at a Budapest train station in Hungary on September 4, 2015.

President Barack Obama, when he addressed the Coast Guard Academy in May, pointed to climate change when speaking about instability in Africa and the Middle East.

“(I) understand climate change did not cause the conflicts we see around the world. Yet what we also know is that severe drought helped to create the instability in Nigeria that was exploited by the terrorist group Boko Haram. It’s now believed that drought and crop failures and high food prices helped fuel the early unrest in Syria, which descended into civil war in the heart of the Middle East,” Obama said.

Mark Levy, a national security consultant who teaches at Columbia University, says Obama’s reference to the link between climate change and international instability is an understatement.

“I think a more accurate portrayal would be that the evidence is now overwhelming that climate change is responsible for a significant amount of the political violence that's taking place around the world, however there's uncertainty about the exact relative magnitude of that contribution in combination with other causes, and there is uncertainty about which of the cases of conflict have an ironclad causal link to climate change,” Levy says.

“This is what happened in Syria. We had large numbers of people desperate enough that they took up and relocated and this contributed directly to the grievances, the challenges maintaining order, and combined with the virtual complete lack of responsiveness on the part of the government, led many people to feel they have no choice but to rise up against the government,” Levy says. “Climate change did play a major role in creating the conditions that made that war more likely.”

But the ill effects caused by climate change aren’t just overseas. Levy says the US is also affected, pointing to people displaced by Katrina and to Superstorm Sandy. He cites research he did while working with the Intergovernmental Panel on Climate Change.

“I was surprised to discover that some of the clearest cases where climate change is triggering loss of human security right now — in ways we can see — were within the US," Levy says. "That was in the Arctic communities that were facing major disruption in their habitats, including to the point where you have entire towns facing the need to relocate because the permafrost was thawing and the local environment was becoming uninhabitable."

As far as future projections for the political effects of climate change, Levy says there’s a chance that natural variations could bring a more normal climate for a period of time. Looking at recent trends, however, he doubts that will be the case.

“We seem to be in the middle of the combination of trends that are worse than we ever imagined, and so, if those trends continue, we are going to be in for really alarming conditions in the next decade. And politically and economically and socially, the trends are also very bad. We have, for the first time since 1990, an increase in the number of internal wars going on globally. This uptick started about five years ago and it caught a lot of people by surprise,” Levy says.

In order to combat the adverse affects of climate change, Levy recommends US government agencies work together to begin “connecting all the dots" between various agriculture, energy, economic, demographic and other departments.

He also recommends “stress testing” various regions to imagine the outcomes of extreme risk — a strategy he says should have been employed in Syria.

“In the Syria case, what we should've been doing is imagining an unprecedented drought and then thinking through how society would respond, how the Assad regime would respond and where things would go from there. And nobody in any position of authority was either doing that or asking other people to do that,” Levy says.

“We need to acknowledge that something new is happening and that we need to change the way we anticipate and respond to these kinds of problems. Whether or not the Mediterranean crisis is a harbinger of more generalized global insecurity triggered by climate change is a question that we have the ability to shape the answer to. The security consequences of climate stress are always preventable, they are not inevitable,” Levy says. “This could easily be a turning point in a positive direction in which we knowledge the threat and rise to the occasion or it could be a place where we moved away from peace and prosperity and descended into a period of insecurity and deprivation.”