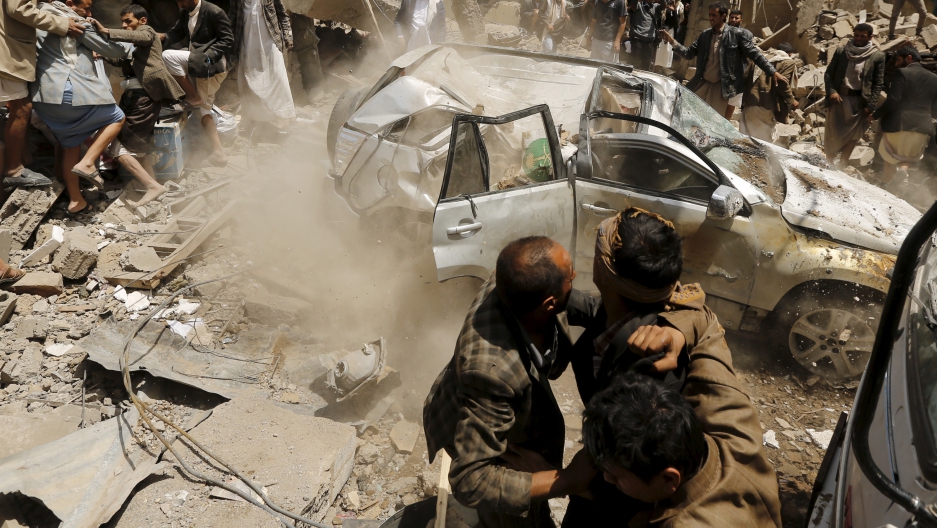 A doctoral student at Harvard University has launched a petition calling on Congress to end US support for Saudi-led airstrikes on Yemen, the country where she was born and where much of her family still lives.

“I have family all over Yemen” says Shireen Al-Adeimi, who was born in Aden, the southern port city that was the scene of heavy fighting this summer. Al-Adeimi, a Canadian citizen who left Yemen at age 12, stays in touch with extended family members that remain in Aden and across the country. “It’s a large family,” she says.

The Yemen civil war pits a rebel group from Yemen’s north, the Houthis, against forces loyal to Yemeni president Abdu Rabbu Mansour Hadi. The besieged Yemeni president found refuge in Riyadh, Saudi Arabia in March and requested military support from a coalition of Arab allies led by the Saudis and including the United Arab Emirates. Both countries buy jet fighters and bombs from the United States.

Al-Adeimi says that her relatives inside Yemen support different sides of the civil war. "My strategy is to just not talk about the political affiliations, because it's not constructive. The common denominator is that everybody is suffering." And they are all equally vulnerable to the coalition airstrikes. "They never know whether they will be next," Al-Adeimi points out.

Nearly 2,000 civilians have been killed by airstrikes, according to figures released by the Office of the UN High Commissioner for Human Rights. And, like most Yemenis, Al-Adeimi's family must cope with shortages of food, fuel and medical supplies restricted by the Saudi-enforced naval blockade of Yemen.

Both the air campaign and the blockade are conducted with logistical and intelligence assistance from the United States and Britain. Al-Adeimi wants to interrupt that assistance.

“The perpetrators of this war are many,” she writes in her petition. “But the only victims are the Yemeni people. The people of Yemen are not at war with the United States, Saudi Arabia, or any other foreign or local agent. However, since March 26th of this year, they have endured countless airstrikes on residential homes, factories, schools, aid offices and refugee camps. To date," her petition continues, "airstrikes have killed more than 4,500 Yemenis, with an average of 30 deaths each day. Additionally, the Saudi-led coalition has already committed at least one war crime: the bombing of a residential area in Al-Mokha on July 24th, 2015 that killed at least 120 civilians and wounded dozens more."

Al-Adeimi says that working on the petition has given her something positive to do for Yemen here in the United States. "I'm hoping to get a lot of attention here, but some of the comments that I'm getting on this petition are from Yemen, and people are like 'Hello, we're here, hello world, hello USA - is anybody hearing us?'"

Initial response to her plea in the United States has been positive. "Senator (Elizabeth) Warren responded to my letter," Al-Adeimi posted on Twitter.

While the Massachusetts senator's letter expressed concern about the humanitarian crisis in Yemen, it did not address continued US support of the Saudi-led airstrikes. "It was a bit disappointing to me," Al-Adeimi says, "because she doesn't acknowledge the responsibility of Saudi Arabia. They are more responsible for casualties than any other group in Yemen."

Nonetheless, Al-Adeimi remains hopeful. "A petition, I think, can raise awareness among people who don't know much about the situation ... I felt that something like this could bring people's attention, and could call on our government to ... put pressure on one of their closest allies, Saudi Arabia. And so, I'm hoping that people could have a conversation; they could speak to their representatives and make some noise, because nobody else is talking about it."