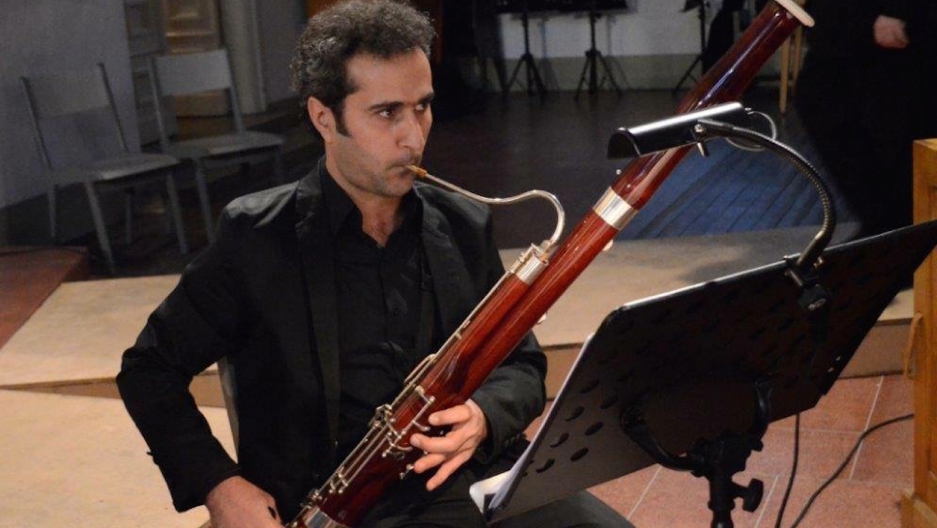 BERLIN, Germany — Two years ago, after he fled the Syrian civil war and settled in Germany as a refugee, bassoonist Ahmed Qafour figured he would never play alongside his countrymen again.

Qafour dropped out of the Higher Institute of Music in Damascus in 2012 because of the war. He arrived Germany in 2013 on the invitation of other Syrian musicians playing in the Young Euro Classic festival.

“I didn’t expect to stay here, but this was a chance to start over,” he said.

Europe's expected to receive a record 1 million migrants and refugees this year, many of them from Syria. On Tuesday, the European Union approved a plan to distribute 120,000 asylum seekers among its members. But the region is extremely divided over whether to let all the newcomers stay and, if so, how to integrate them.

Qafour has discovered a solution in Germany to clearing out all that noise and actually bringing cultures together. Other countries should take note. It’s called music.

Qafour applied for asylum and now lives in Berlin. And on Tuesday, he took the stage at the world-class Sendesaal Theater in Germany’s northwestern city of Bremen with other migrant musicians from Damascus, Aleppo and elsewhere in his homeland.

The performance was the first by the Syrian Expat Philharmonic Orchestra, an ensemble of 30 Syrian migrants and 20 German players hoping to make music a counterpoint to the hatred loosened by the European refugee crisis.

"Every one of us felt that this was our responsibility to show what Syrians are," Qafour said. “Everyone was giving their ultimate best.”

Syrian contrabass player Raed Jazbeh came up with the idea when he applied for asylum in Germany two years ago after playing in the Arab Youth Philharmonic Orchestra in Berlin. He couldn’t return to war-torn Syrian, he said, but he could bring Syrian music alive in Europe.

“Once I settled in Germany, I noticed that many Syrian musicians are living in Europe and particularly Germany — some as refugees and others as music students and professionals — while in Syria the national orchestra is almost empty,” he said. “I thought why not to build a Syrian orchestra here in Germany?”

Initially, Jazbeh brought together a smaller group called the Camellia Syrian Ensemble that played for Syrian and German friends and family.

“The idea was to gather as many Syrian young musicians living in Europe and present an outstanding performance, with new music and ideas,” he said.

Then last year, the public Bremen Council for Integration, which sets up programs to help migrants settle into their host society, had the idea to expand it.

Jasmina Heritani, a council member, said she and her colleagues wanted to help Syrian musicians integrate by using their talents. Many Syrian refugees have skills that should be shared with the world, she added. “We aimed for this event to open doors for those professionals and students to have regular jobs as musicians in the future and work in Germany,” Heritani said.

The council helped solicit donations from individuals and businesses to pay for the expenses of a 50-member orchestra, including finding practice and performance spaces and accommodations for out-of-town musicians. By June, the expat orchestra was adding members. Bremen’s music school donated space and loaned instruments for the show.

The Syrian musicians are all former students at the Higher Institute of Music in Damascus. They now live as migrants, asylum seekers and students in Austria, France, Germany, Spain, Sweden and the Netherlands.

Flutist Fadwa Merkhan arrived in Germany last April on a student visa. Before last week, she hadn’t played since April with Egyptian friends in Cairo, where she stayed for a year after quitting Syria.

Merkhan wanted to join the orchestra as soon as she heard about it.

“I believe that the most important message for art is to stand against dictatorship and oppression,” she said, in a swipe at Syrian President Bashar al-Assad. “For this I was playing.”

Not all the musicians are anti-Assad. Qafour said the orchestra is a symbol of cooperation, not only between Europeans and Syrians but also between Syrians who support the regime and those who oppose it.

“These are people playing together regardless of their different political point of views,” Qafour said. “We’re playing as Syrians, for peace and to change the face of war and the stereotypes it has created about Syrians.”

Running an orchestra isn’t easy, of course. The musicians had only three rehearsal days before their first concert due to their cash-strapped finances. “We needed at least a week, but we also needed more money for the accommodation and the other expenses for a longer stay,” Jazbeh said.

Qafour wasn’t sure they had sufficient time to “build the soul” of the pieces they were performing. “Three days to rehearse is really few,” he said. “It can sound like every musician is only playing his note without the general harmony.”

Heritani, of the integration council, hoped that such events would give Germans an opportunity to learn more about Syria’s rich culture and its people living in Germany. “I have seen previous work by Raed and I could say that it was great.”

Some lively, some somber, most laced with Eastern tones, the music evoked themes of suffering, loss, resilience and redemption.

Good music is always emotional, said conductor Martin Lentz, who heads Bremen’s Youth Symphony Orchestra. But witnessing Syrian refugees performing their countrymen’s music in Germany was particularly touching. The Syrian musicians are enormously talented, he said. Their skills should remind everyone that each refugee is an individual with gifts to share.

“In the beginning, I was only the conductor,” Lentz said. “But now it feels like a great wave of emotion from different sides as we push the project.”

The orchestra is already slated to perform in Luneburg in northern Germany on Oct. 3. Jazbeh is working hard to schedule more events.

“We’re getting a lot of invitations to hold concerts, but they come without any financial support or coverage,” he said. “But this will not be a onetime event, even if we hold only a concert a month. We want to establish a significant presence in Germany and Europe as Syrian musicians. We need a lot of patience and time.”