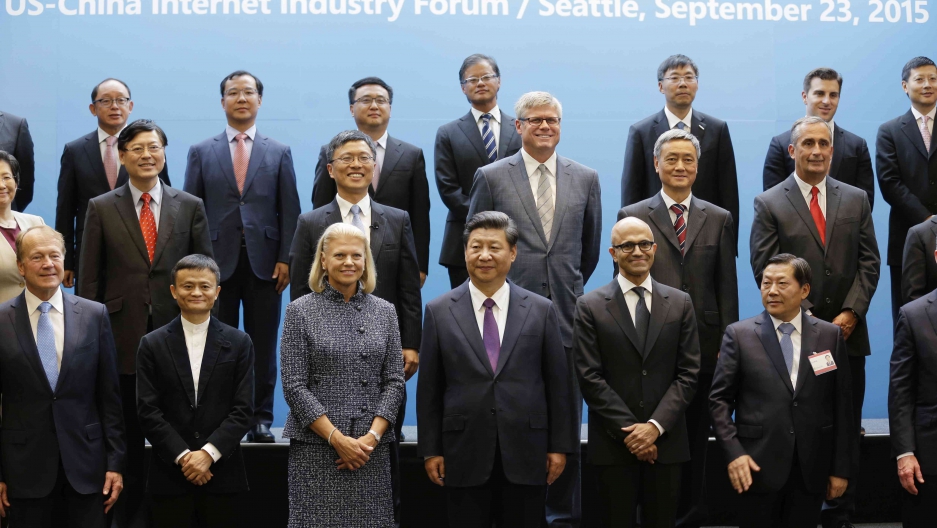 Chinese President Xi Jinping (front-row-center), poses for a photo with a group of CEOs and other executives at Microsoft's main campus in Redmond, Washington September 23, 2015.

The Seattle visit was an obvious opportunity for the companies — which include Amazon and Apple and represent $3 trillion in market capital — to court a potential online market of more than 450 million people in the Communist country.

However, here's what loomed in the background: The sanctions President Barack Obama threatened against China for alleged espionage committed by businesses and individuals in that country, which could make it harder for America to do business with China.

And some saw the visit as an opportunity to raise larger issues, including the human rights violations reportedly committed by China as well as its systemic censorship. Sophie Richardson, China director of Human Rights Watch, would like American companies to lobby China for the privacy rights of its citizens, the same way they did the US government.

“We also want them to commit publicly to not enabling or participating in Chinese government efforts to censor online speech,” Richardson said.

She has also cautioned companies against storing their information on servers in China, which could be more vulnerable to surveillance, resulting in a lower standard globally.

That’s the conundrum, according to Rich Ellings, president of the Bureau of Asian Research, a nonpartisan think tank informing US-Asia policy. “The people in those companies totally agree with the values, and at the same time they have got to make some money,” said Ellings. “That’s why it’s not their job first and foremost to base their business decisions on how much progress they can make in bringing freedom to Chinese.”

The Internet is the biggest threat to China because it is so decentralized, Ellings said, and it’s the job of the policymakers to push it on the issues of surveillance and human rights.

“The stakes are huge,” said Ellings. “The rise of China is both the biggest challenge and the greatest opportunity this century.”