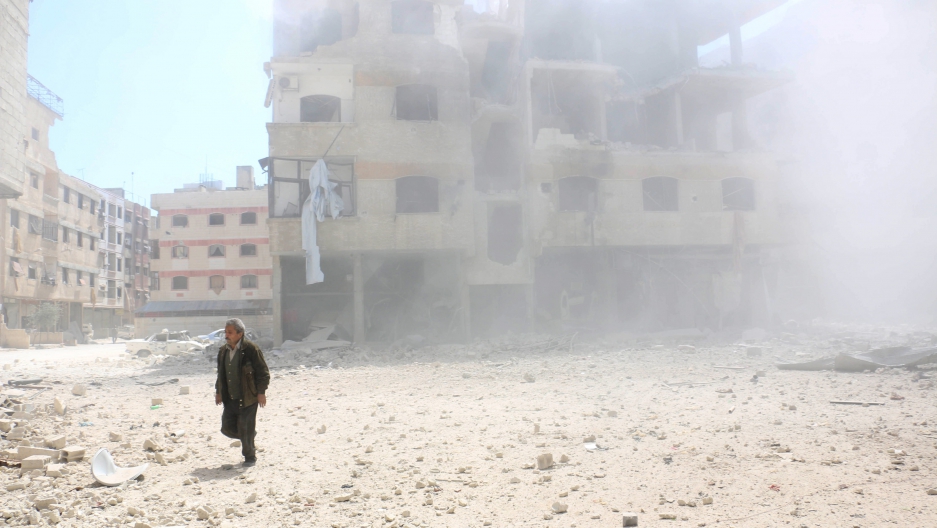 A man walks amid rubble of damaged buildings after what activists said was a mortar shell thrown on an area after air strikes by forces loyal to Syria's President Bashar al-Assad in Ain Tarma, in Eastern Ghouta, a suburb of Damascus, on April 5, 2015.

Mohammad Saladin lives 10 minutes away from a front line in Syria's civil war. During the day, his Damascus suburb of East Ghouta comes under government airstrikes, destroying lives and whatever is left of the crumbled infrastructure of this bombed out, pockmarked post-urban landscape. At night, if he keeps his window open, Saladin can hear the shelling and periodic firefights between rebels and government troops at the frontline.

“We’ve gotten so used to the bombardment that it’s part of our daily life now,” he told me on Thursday over Skype. Saladin is not his real name, but a nickname he adopted in late 2012, when he defected from the Syrian army to join his family members in rebel-held East Ghouta. Since then, he has been unable to leave East Ghouta because he would get arrested at the first government checkpoint.

Many Syrians share his plight. They are wanted by the authorities for defecting or for being related to a known rebel (or as the Syrian government put it, a terrorist) or even because their national ID card says they are born in what is now considered a rebel “hotbed.” They have become something like second-class citizens in their own country, risking detention and torture in government prison if they enter government territory, or risking death and starvation in rebel held areas like East Ghouta.

But this week is different because it’s the Eid Al Adha. Eid, the festival of the sacrifice, is about renewal and second chances. It derives from the Biblical story of Abraham, who obeys a divine command to sacrifice his son, before the boy is switched with a calf at the very last minute.

As a sign of humility, Muslims everywhere will slaughter livestock and distribute the meat to the poor.

For Saladin, who like many Syrians knew only a middle class life until the uprising-turned-war began in March 2011, Eid al Adha would normally be the time when he would buy meat for the less fortunate. But now, he and and the other residents of Ghouta have been fending off hunger, not because of unforeseen poverty, but because they have been under a government siege since 2012. No food or medicine can freely enter the area. 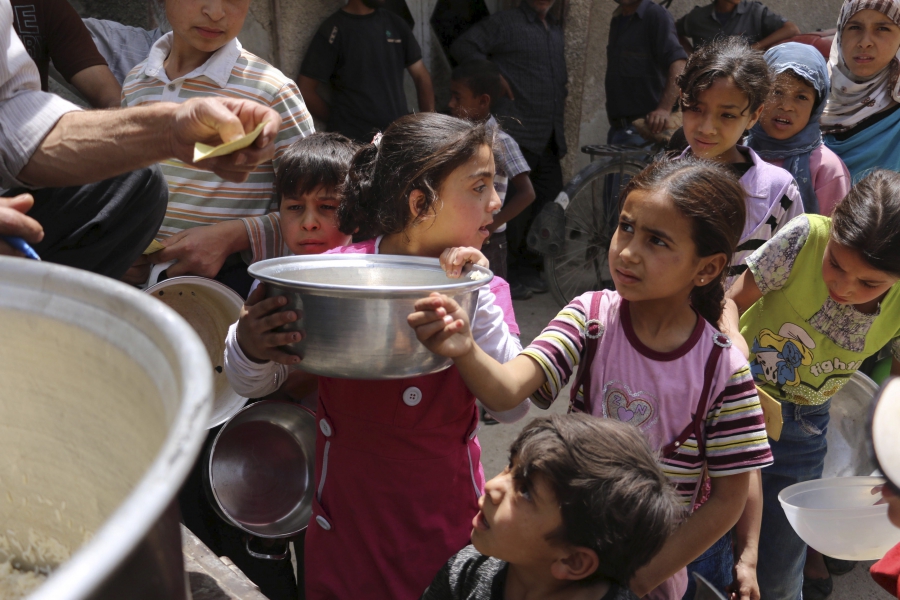 Children carry containers as they queue to receive free meals from a soup kitchen in the besieged town of Deir al-Asafir in the Eastern Ghouta of Damascus May 19, 2015.

I first visited Saladin in Ghouta in the summer of 2013, shortly after one of the world’s worst chemical attacks targeted the area. In the West, we might go hungry because we forget to shop at the supermarket, or we find ourselves stranded in a small town with all the restaurants closed. In Ghouta, we went to bed hungry, and in the morning we broke our fast on a few olives, which had to tie us over until a mid-afternoon meal, a sort of lunch-dinner, where we were lucky that day to have an egg with some bread.

I left the besieged area and had a good meal. But almost everyone I met in Ghouta remains there today, and survives on the little food they can buy from smugglers who exploit prices to the maximum.

Saladin’s sister-in-law, a pharmacist, told me that one of the biggest medical problems she sees is the bloated stomach associated with hunger, especially among young mothers and children.

“It’s very hard to treat, and we’re not equipped to treat it,” said Moamena, adding that Hepatitis A and dysentery are endemic.

The bombardment has destroyed many of the underlying water pipes in the towns in East Ghouta, causing septic water to contaminate the water supply, causing the rampant liver diseases like Hepatitis and other infections.

Aya, 8, fills containers with water obtained from a pool formed by damaged and leaking pipes in eastern Ghouta May 2, 2014.

At least Saladin and his family are among the lucky ones in Ghouta. Saladin now has a three and half months daughter, and when they pool the family resources together, they manage at least to keep their children fed and healthy.

They have even managed to create a semblance of an Eid atmosphere for the neighborhood children, who in times of peace would expect to spend Eid at an amusement park, riding a pony and a ferris wheel in brand new clothes that their mother carefully selects for the occasion. This Eid, the children of Ghouta will make do with a few toys as they play in the basement of the building, where it is safest during airstrikes.

“Though many parents still won’t send their children to play in our basement because they’re afraid,” said Moamena, Saladin’s sister-in-law. 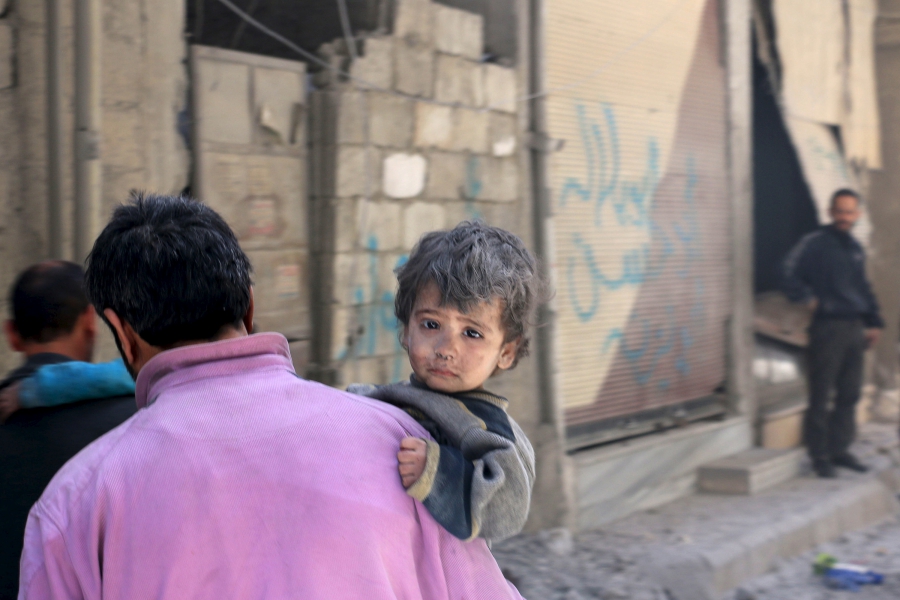 A man carries a child who survived after he was pulled from under rubble following what activists said was shelling by forces loyal to Syria's President Bashar al-Assad at Ain Tarma in eastern Ghouta, a suburb of Damascus, Syria April 26, 2015.

Saladin’s father-in-law, Abu Anas, explained that their family is also fortunate because they are big in number, unlike the majority of families in Ghouta today who find themselves separated from their loved ones. Abu Anas was not shy to share the day’s activities.

“I went to visit my daughter, and then visited my mother. And my other daughter came over to visit. We’re doing what we used to do on Eid. But for other families here they’re not celebrating Eid because they don’t have many family members left,” he told me.

Before the war, about 5 million people lived in Ghouta, according to local charities.  Now the population hovers around 500,0000. Many have fled the fighting, finding refuge in Damascus city if they can, or in camps in Lebanon or Turkey. Some fled to Europe, which for Saladin is more of a tragedy on top of all the sadness.

Saladin remembers a time when Western diplomats and UN officials were in constant contact through the Internet with the people of Ghouta. UN personnel have taken a headquarters at the Four Seasons Hotel in downtown Damascus. That's barely a 15-minute drive from Saladin’s home, if you don’t count the checkpoints and road closures. But he said the UN no longer visits Ghouta like it once did, and the last time Saladin or anyone he knows in Ghouta heard from the US State Department was about 18 months ago.

An State Department official confirmed the lack of US contact to The World. The official on condition of anonymity due to the sensitivity of the matter.

“We used to coordinate contact with people inside Syria until about a year and a half ago, but this has become so difficult because we don’t have an embassy there. We’re disconnected from Syria,” he said.

But for Saladin, this is a sign of a world turning its back on him, and on his 3-month-old daughter, Maria.

“Now everyone is talking about receiving refugees as if that were the solution. The US wants to receive thousands, which means they believe this crisis will continue,” he said. “So the people here are convinced that neither America nor Europe nor the international community are coming to our rescue.”