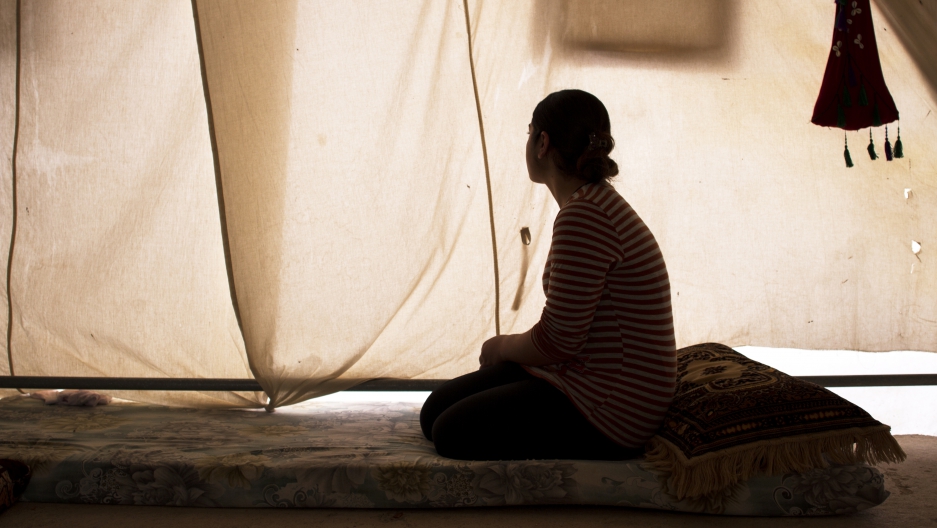 Nour in a tent allocated to her uncle and his family in a camp for displaced people in Dohuk, northern Iraq.

Nour is more relaxed these days, though she still keeps her hands clasped tightly in her lap as she speaks and asked not to be identified by her real name. Nearly a year after being released from Islamic State captivity, she describes a life that is slowly returning to normal.

“Yes, I feel a bit better from before, but honestly not much.” Nour says she spends her days helping her aunt with chores; cleaning the tent, baking bread and helping take care of her feisty three month old niece, whose cries and giggles coax Nour to flash a rare smile.

Just over a year ago when Islamic State fighters took swaths of territory in northwestern Iraq, the group killed and kidnapped thousands of Yezidis, a small religious minority with roots that stretch back to the religions of ancient Mesopotamia.

In the following months as women like Nour began to escape or be released from ISIS captivity, Yazidi spiritual leaders called for their once insular community to accept them back and created a new ritual: re-baptism. After being forced to convert to Islam, marry a fighter and raped while held by ISIS, Nour went through the new baptism ceremony and is back living with her family, but in many ways she remains on the periphery of society here.

“This isn’t even my tent,” she says. Nour isn’t married and her father and brothers are all missing, most likely dead, so she’s been living with her uncle’s family in a camp for displaced Iraqis. And with the arrival of Nour’s new niece, space in the tent is becoming even more scarce. “He said this winter I might not be able to stay here anymore,” Nour said explaining when school starts the other cidlren will need space to study and do their homework.

A short drive away in the holy village of Lalish, Yazidi spiritual leaders acknowledge that their hopes of a seamless reintegration aren’t going exactly as planned. So after being rebaptized at the White Spring in a shrine tucked halfway up the mountain, instead of returning to camps or other temporary housing, many women are traveling abroad: to Germany.

“An entire bus of women, they came here to the spring and then left straight to the airport,” said Khalil Haji, a young man originally from Sinjar, now living in a tent tucked between the temples in Lalish. He and his friends spend their days hanging out playing games on their phones outside the spring.

He says he thinks it’s a good thing that these women have the opportunity to get out of Iraq because in Germany they’ll be able to get the psychological care they need. “In Germany they have the right doctors for those kinds of problems.”

But some in the large Yazidi activist community admit that sending the women to Germany isn’t just about mental health, it’s because despite calls for acceptance, women are still being stigmatized and so have little hope of a future in Iraq.

Nour admits she doesn’t like living in the camp. Even though she’s been here nearly a year, it still feels foreign. And she says she wishes there was a professional she could talk to about what she’s going through, even though she feels better than before, something still isn’t right.

“There is something in my head that needs to be released,” she said, “even if I go to the town and I see all the people, this used to make me happy, but not anymore. It’s like something is broken in my heart.”

Nour pulls up pictures on her phone of her and her sister. One photo is from her sister’s wedding day — the two women have blow-dried hair and wear heavy eye makeup, they’re smiling subtly, striking a glamorous pose. We scroll through the rest of the photos together.

This is why Nour refuses to leave. Her sister is still being held by ISIS and until she’s released, Nour says she’s in Iraq to stay.