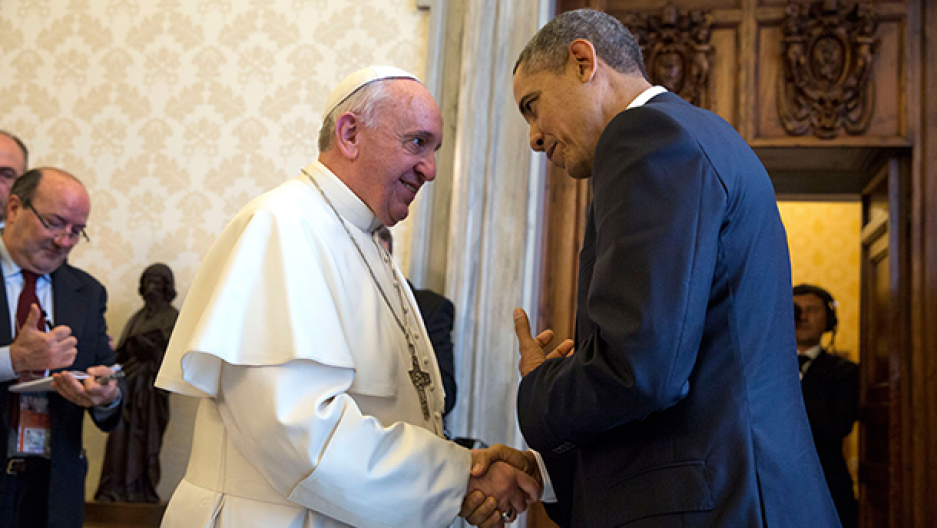 When Pope Francis arrives in the US, he will meet with President Obama and address a joint session of Congress, where he is expected to speak about the contentious issue of climate change.
Credit:

When Pope Francis addresses a joint session of Congress today, he will speak directly to many politicians, including some presidential candidates, who are not welcoming of his message about climate change and economic inequality. It could be very interesting to watch.

“A pope addressing a joint session of Congress? It's going to be, first of all, political theater of the highest sort,” says Reverend Richard Cizik, president of the New Evangelical Partnership for the Common Good, which seeks to end partisan and sectarian divisions.

Cizik points out that presidential candidates Marco Rubio, Lindsey Graham, Rand Paul and Ted Cruz — senators all — will be sitting in the chamber during the address. “So the question is, will they sit on their hands or will they applaud,” Cizik asks.

While Cizik is an Evangelical Christian, not a Catholic, he is a big fan of Pope Francis’ encyclical on climate change, Laudato si, which he calls an "inflection point" in the debate about climate change. For more than a decade, Cizik has been an outspoken advocate of "creation care," the belief that stewardship of the Earth is a God-given responsibility.

“The resonance of what he says will have a huge, huge impact upon the public, and most importantly, I hope, upon the public's view of this issue,” Cizik says. “Because only about 16 percent [of Americans] think that climate change will impact them personally — it’s just happening somewhere else, not here. And of course we know just the opposite is true.”

Cizik also expects Pope Francis to touch upon issues like capitalism itself, immigration and what he cares about most: help for the poor, its interrelationship with environmental protection and economic inequality.

“These are all issues in our election year and a lot of Republicans are the ones who have been pooh-poohing these,” Cizik says. “I would hope and pray that he makes the most of the moment. ... We have politicians who will be sitting in front of this moral leader who are bought and paid for by the oil and gas industries, and they should be ashamed of themselves — but they probably won't be.”

The title of the pope’s encyclical, Laudato si, literally translates as "Praise be to you, my Lord.” In it, Pope Francis quotes Saint Francis, his namesake, who “reminds us that our common home is like a sister with whom we share a life and a beautiful mother who opens her arms to embrace us,” Cizik explains.

The pope is asking people of all faiths to begin to think differently about the environment, says Cizik. “He’s called for an ‘ecological conversion for the faithful.’ That’s what evangelicals need to do. It's to begin to see what's happening to the Earth. It's described persuasively in the encyclical: Man is doing this to our environment, our ‘common home,’ as the pope calls it.”

Cizik has been among very few evangelicals who have spoken out publicly on climate change. In fact, he says, the evangelical movement’s response to the issue “has been a black mark on the movement and most of its leaders.”

“Their children, grandchildren and others will look back and ask, ‘What did you do, dad, or granddad? What did you do about this issue?’ And some will have to, with embarrassment, admit they did absolutely nothing. In fact, they denied the science,” Cizik says.

Younger evangelicals get the science, Cizik says. “They get the moral imperative. They are winning the day and they don't have a problem here — they get it.”

Nevertheless, Cizik believes it is unlikely that large numbers of evangelicals will change their position on the concern about climate.

“I think it will take a miracle of sorts, [because] the divisions, the polarization, is so deep,” he says. “Even within the Catholic Church, you see a northeast white Catholicism that votes Republican; you have a Southwest Latin or Hispanic and young church that votes very Democratic. You have that divide within the Catholic Church, and you have that same kind of divide within Evangelicalism.”

“So it's going to take a miracle of sorts for people's hearts to be changed,” Cizik concludes. “Climate change has joined the Religious Right's division over issues: same-sex marriage, abortion and the like. They’ve put climate change in that equation, and that is so sad.”