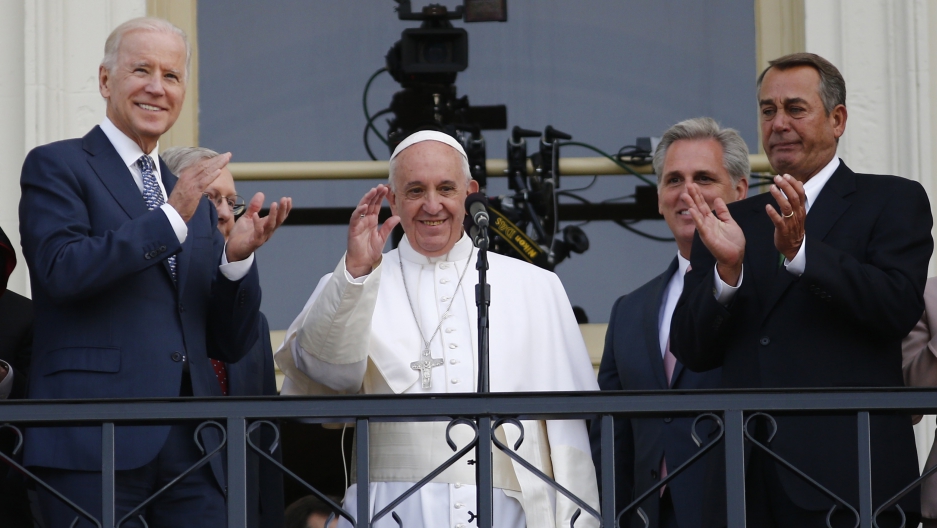 Pope Francis waves to the crowd from the Speaker's Balcony on the West Front of the Capitol as he stands with Vice President Joe Biden (L) and Speaker of the House John Boehner (R) after concluding his address before a joint meeting of the U.S. Congress on Capitol Hill in Washington, D.C. on September 24, 2015.

"I have sought to present some of the richness of your cultural heritage, of the spirit of the American people. It is my desire that this spirit continue to develop and grow, so that as many young people as possible can inherit and dwell in a land which has inspired so many people to dream," is how Francis ended his speech.

Then he finished with what has become his biggest applause line on this visit, "God bless America!"

Kings, presidents and prime ministers have addressed the full US Congress over the years. But until today, no Catholic pope had spoken before a joint session of the legislature.

In what might be another historic first, Francis compared the work of his audience members to that of Moses. He said lawmakers must create just legislation to keep their people unified, but at the same time they have a higher purpose.

"[Y]ou are asked to protect, by means of the law, the image and likeness fashioned by God on every human face," Pope Francis said.

Conservative members of Congress broke into applause when Pope Francis invoked the Catholic teaching that abortion is a sin. "The Golden Rule also reminds us of our responsibility to protect and defend human life at every stage of its development," he said.

But then, Francis quickly pivoted to another issue where conservatives would disagree.

"This conviction has led me, from the beginning of my ministry, to advocate at different levels for the global abolition of the death penalty. I am convinced that this way is the best, since every life is sacred, every human person is endowed with an inalienable dignity, and society can only benefit from the rehabilitation of those convicted of crimes."

The importance of dialogue was a major theme throughout the speech. And in that context, Francis talked about the scourge of armed conflict around the world. He raised a question about why these conflicts are so awash with weapons. And then answered it himself.

“In the face of this shameful and culpable silence, it is our duty to confront the problem and to stop the arms trade,” Francis said.

As expected, the pope brought up the issue of climate change and said it is not too late for America and the US Congress to act. Francis quoted from his own Catholic encyclical on the environment.
“Now is the time for courageous actions and strategies, aimed at implementing a culture of care and an integrated approach to combating poverty, restoring dignity to the excluded, and at the same time protecting nature,” he said.

As if to respond to some criticisms from the political right wing that paints this pope as hostile to capitalism and global free markets, Francis said, “Business is a noble vocation, directed to producing wealth and improving the world. It can be a fruitful source of prosperity for the area in which it operates, especially if it sees the creation of jobs as an essential part of its service to the common good.”

Francis went on to say that the common good includes caring for the earth.

The pope denounced ideological extremism and fundamentalism as two things that are fueling so many acts of brutality and violence around the world. But he warned that the response to such religious-fueled hatred and killing must strike a balance between combatting violence on the one hand, and protecting religious, intellectual and individual freedom, on the other.

The first pope from Latin America highlighted his shared past with citizens of the United States. “We, the people of this continent, are not fearful of foreigners, because most of us were once foreigners. I say this to you as the son of immigrants, knowing that so many of you are also descended from immigrants,” Francis said.

Again, Pope Francis called on Americans to live up their own ideals at a time when so many people across the globe have been driven from their homes by war, persecution or poverty.

“Building a nation calls us to recognize that we must constantly relate to others, rejecting a mindset of hostility in order to adopt one of reciprocal subsidiarity, in a constant effort to do our best. I am confident that we can do this.”

House speaker John Boehner appeared nervous as he waited for the arrival of Pope Francis on Capitol Hill. Boehner has been trying to bring the head of his own Catholic Church to Washington for years, going back to Pope Benedict and Pope John Paul II.

The Holy Father's visit to Washington has brought normal life in the city to a standstill. But in keeping with his lowkey style, Francis arrived for his speech in a tiny Fiat hatchback.

After his speech, the pope apparently declined to have lunch with some of America's top politicians and instead he will be dining with homeless people. In New York and Philadelphia, the pope has plans to make other symbolic stops - to a tough neighborhood in East Harlem and a correctional facility in Philadelphia.

From the very beginning of his pontificate, these small gestures have come to represent Pope Francis's primary message. He wants to refocus the Catholic Church's mission to be a "poor church for the poor."

But in speaking to the US Congress, with all the wealth and power its members represent, Francis is consciously wading into the worldly realm of politics. And he is presenting lawmakers with on the left and right with a challenge to rethink their views on some contentious issues.