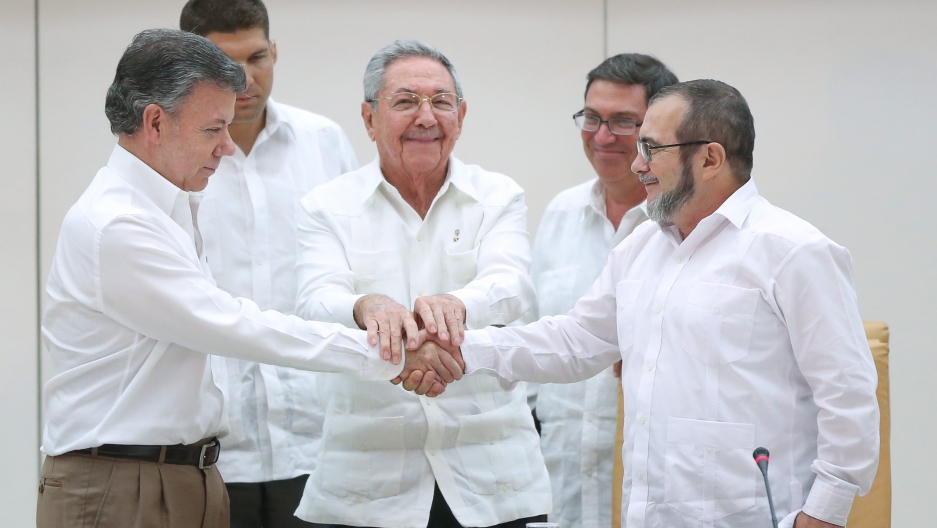 No jail time for war crimes — that's the deal Colombia's government and FARC rebels struck to advance one step closer to ending five decades of war.

The breakthrough in peace talks in Latin America's longest running insurgency came Wednesday at negotiations in Havana. The two sides agreed to put down their arms within 60 days of signing a pact now slated to be ready for agreement on March 23, 2016.

As part of the deal, rebel fighters, right-wing paramilitary groups and government combatants who confess to crimes like kidnapping, murder or forced displacement of civilians won't go to prison.

"Maybe they'll serve a sentence outside of the country, or under house arrest," says Bogota-based journalist Nadja Drost. "If they try to help victims by describing their role to help redress victims' rights, then they'll receive reduced sentences, but not necessarily in jail."

Drost visited a FARC encampment in southern Colombia three months ago after the start of recent talks. She says rebels there found it hard to imagine a post-war future outside their rebel organization.

"A lot of them joined the FARC at a really young age. It's become their family, their friends, their home," she says. "They're wondering what's going to happen to them when they come out."

One 50-year-old FARC fighter told Drost he wants to remain in the "FARC family" even after a peace deal.

"They were the ones who taught him how to read and write. They took him in as family, they mourned the death of his brother who was also a FARC fighter when he was killed," she notes. "All he's known is a life is moving camp from night to night with an AK-47 saddled around him. What's he going to do?"

But peace seems to be in the offing. The likelihood of a deal was brought home to Colombians of many different political perspectives when they saw the images of President Juan Manuel Santos shaking hands with FARC leader Rodrigo Londono, a.k.a. "Timochenko" in Havana on Wednesday.

"A lot of Colombians never imagined that those two would appear in the same room together, let alone be shaking hands on an agreement," she says.

In the past five decades Colombia's war has claimed 220,000 lives and displaced millions.

Although Pope Francis was not directly involved with the negotiations, observers say the two sides worked feverishly to reach an agreement that coincided with the pontiff's Havana visit.