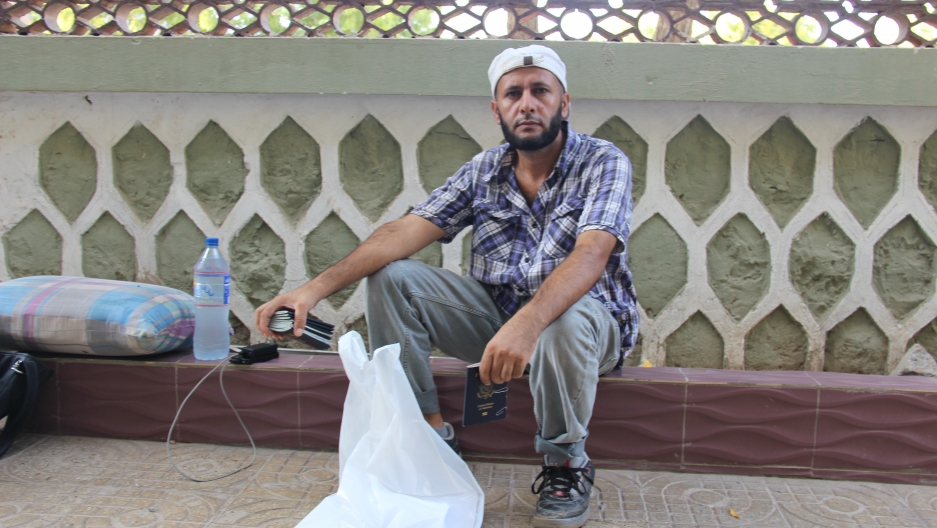 Abdul holds his and his family's passports in Djibouti.

Abdul is an American citizen on the front line of the biggest worldwide refugee crises of modern times. He’s not an aid worker, a soldier or a politician, however. He, his wife and his nine children are fleeing war, and are stranded in Djibouti City off the coast of the Gulf of Aden.

According to a UN refugee agency report issued earlier this summer, some 60 million people are refugees right now — more than at any other time since records were first kept. While news media has focused on the effects of this humanitarian emergency in Europe, the front lines of the refugee crisis extend around the world. The first destination for many fleeing conflict isn't Europe, but is often only slightly more stable countries in the Middle East, Asia, and, in this case, the East African country of Djibouti.

Abdul used to live in Rochester, New York, where he worked at a beauty supply store owned by his brother. For the past two years, however, he has been living in Yemen with his wife and nine children, ages 4 to 21.

On the night of March 27, Abdul was with his family at their home in the Yemeni city of Al-Dhale. That’s when Sana’a, the capital of Yemen was bombed by Saudi-led forces, targeting the Houthis who had taken over the city.

Abdul was terrified for his family. He kept hoping the situation would get better, that the violence would blow over. But the airstrikes soon turned into all-out civil war.

“It was close to us. We heard about a lot of people who died. We knew them,” Abdul said. “We heard the bombs and we decided we had to go. [Officials] told us that if we left, no one would go with us or come to get us. But we went anyway.”

Abdul piled his wife and nine children into the family car, borrowed some gasoline and headed west, away from the explosions. They left in a hurry, and didn’t bring any possessions with them. Soon they found themselves in the middle of the fighting, caught in the crossfire between two sides.

“We drove fast and it was very scary. The kids all ducked down. My wife cried, she didn't think we would make it,” Abdul said. “But we made it. God saved us."

The family didn’t have a lot of options for escaping the country. The air space above Yemen was a no-fly zone, and the US government was making no moves to evacuate Americans citizens. Abdul realized he’d have to get his family out of the country by boat.

Abdul drove his family to the port city of Aden near the Red Sea. He began searching for a way out of Yemen. He and his family camped out on the beach for three days, asking about boats. Finally, a ship arrived in port carrying flour. Abdul said it was a UN ship, and charged passengers $100 each for a ride out of Aden.

“[It was] very, very old, wooden, for animals. Very dirty inside, nasty, not clean. Close to 200 people [were loaded into it],” Abdul says.

The sea trip to Djibouti, which took 14 hours, was harrowing.

“Most people they threw up, headache, sick, no food, no anything,” Abdul said. “Most of my children threw up. [We were] scared. The boat tipped close to the water.”

They arrived in Obock, a port city in the African country of Djibouti on May 3. US Embassy workers took note of their names and passports and gave them food and blankets, but were unable to give any other immediate assistance. Abdul and his family were herded, along with their fellow passengers, to an enormous refugee camp inside the port.

“A lot of people. Too many people [were in that camp],” Abdul said. “You didn’t have any space to leave your things.”

They were stuck in the camp for three days, until one of their fellow camp mates, a man from Yemen, was able to find a place to stay, and invited them to come live with him temporarily.

Now Abdul and his family are waylaid in Djibouti’s capitol city. Abdul has a US passport, and his wife has a US visa, but they don’t have travel papers for their children, so they’re unable to leave. Prices in Djibouti City have gone up because of the recent influx of refugees, and Abdul is unable to work, so he’s borrowing money from friends and family in the US.

"Life is hard,” Abdul said. “The problem we feel right now — when are we going to get out? Take my kids to school? Go to work? I thought it would go faster. I never thought we [would] be in Djibouti for five, six months."

Abdul’s story of escape from conflict matches that of refugees and displaced people the world over.

According to UNHCR, more than 25,000 people have arrived in Djibouti from Yemen by sea and air since the start of Yemen civil war. Many of them are still stuck in limbo in refugee camps in Obock. What’s more, the new arrivals have added to the more than 12,000 mainly Somali refugees already living in in Djibouti — a country with no permanent source of surface fresh water, and a 40 to 60 percent unemployment rate in some regions.

"Djibouti is one of the few countries that has opened its borders to the persons fleeing the conflict in Yemen," says Paul Ndaitouroum, a UNHCR Djibouti representative. She says the new arrivals "place an enormous burden on already overstretched social services, natural resources and economic assets."

"Here in Djibouti, we have a forgotten crisis," says Claire Bourgeois, UNHCR's regional refugee coordinator for the Yemen situation.

And there are thousands of Americans caught up in the flood of displaced persons fleeing to east Africa. According to the US Embassy in Djibouti, they have met, registered and given aid to nearly 5,000 Americans, or relatives of Americans fleeing Yemen.

Abdul’s story may be similar to many of the 60 million displaced peoples around the world. There is one glaring exception that sets him apart, however. He’s an American. His is a position most Americans don’t expect to find themselves in. But he also has a much better chance of escaping the refugee-like limbo status he finds himself in.

One of Abdul’s eldest daughters just got a visa to go to the US this week. The other children all have interviews at the embassy in September for their immigration case.