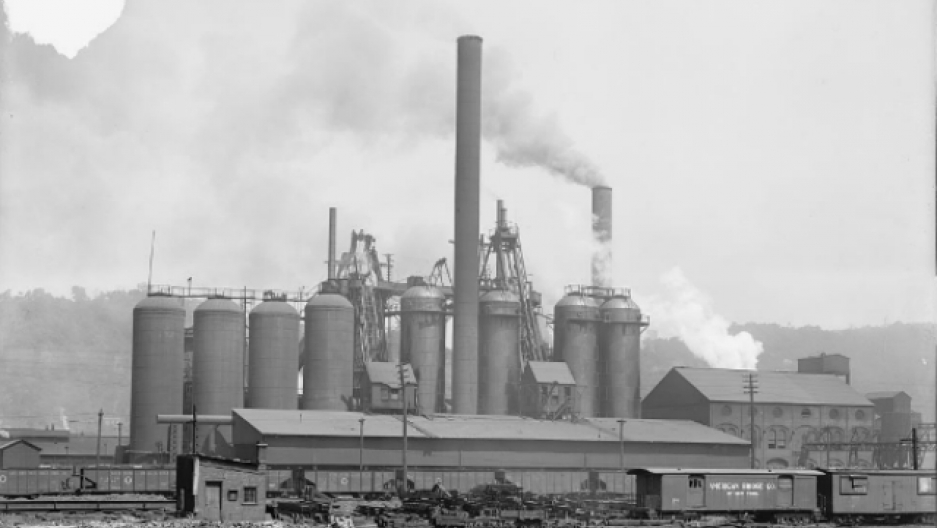 Let’s say you’re a factory worker in 19th century Pittsburgh: Your hours are long, your world is dirty, and your security is precarious. If you get injured, your family’s meal ticket is pretty much off the table.

However, the same sooty, smoggy city where you’re toiling away is also a veritable fount of innovation.

“You had a number of things coming together in the mid-19th century,” says Professor Edward Muller of the University of Pittsburgh. “You had an iron industry that was booming, an oil industry in northwest Pennsylvania ... and you had a glass industry that was the largest in country. You put these together, and it was an atmosphere of mechanics, technicians, entrepreneurs, who all understood innovation was the way to move forward. And they were highly competitive with each other.”

The same city that was filled with men, women and children laboring in polluted factories was also chock full of captains of industry — or, to use the pejorative, robber barons. Men like bankers Andrew and Richard Mellon, the inventing genius George Westinghouse (who fought with Thomas Edison about the future of America’s electricity), and most famously, the industrialist Andrew Carnegie, one of the 10 wealthiest people in American history.

One doesn’t need to look far to see the impact of these industrialists on the city. Their core businesses endured for decades. And their philanthropy is still with us: From Carnegie came the Carnegie Museum of Natural History, Carnegie Mellon University and the Carnegie Science Center.  The Carnegie Library of Pittsburgh was one of nearly 1,800 libraries that Carnegie's money funded nationwide (a list is here).

The industrialists certainly gave back, but in ways that didn’t necessarily relieve the suffering of the city’s workers and laborers. Muller points out that Carnegie in particular was a Social Darwinist, believing that the best people would naturally rise to the top (and there was something wrong with those who didn’t). Rather than improving working conditions in his steel mills, therefore, he endowed libraries and museums, and let workers better themselves.

Carnegie’s largesse stands in stark contrast to the way he actually treated the people who worked for him. He broke up unions, gave his workers only one holiday (July 4), and when his laborers rose up in the Homestead strike of 1892, his company shut it down with an incredible display of violence.

Muller believes that Carnegie, who started out as the poor immigrant son of a textile worker, recognized this irony:

“He spent the rest of his life trying to make excuses, and trying to explain his behavior. Because Carnegie was a very smart guy, he may not have been a loveable, huggable kind of guy, but he was a genius in many ways. And he knew what he had done.”

This dichotomy could seem especially relevant in our own time, with captains of industry being praised for their philanthropy while presiding over dismal working conditions. (According to The Economist, there are real similarities between a tech titan like Mark Zuckerberg and a robber baron like Carnegie)

After all, if you were a factory worker in 19th century Pittsburgh, would it help to know that a couple of decades down the road, the citizens of Pittsburgh would have access to wonderful museums and libraries? These questions are ones that Muller grapples with. And he doesn’t have any simple answers:

“The fact is that Pittsburgh has these wonderful, cultural institutions, a wonderful spirit of donation. The foundations that we have heavily came out of those worlds. And for a city of our size today, comparatively speaking, we’re muscular in terms of our foundation endowments. So the legacy is enormous. How do you sort that out in nice, simple, black and white boxes? It’s not easy.”

This story was based on a radio interview on PRI's Innovation Hub. Please subsribe to its podcast.