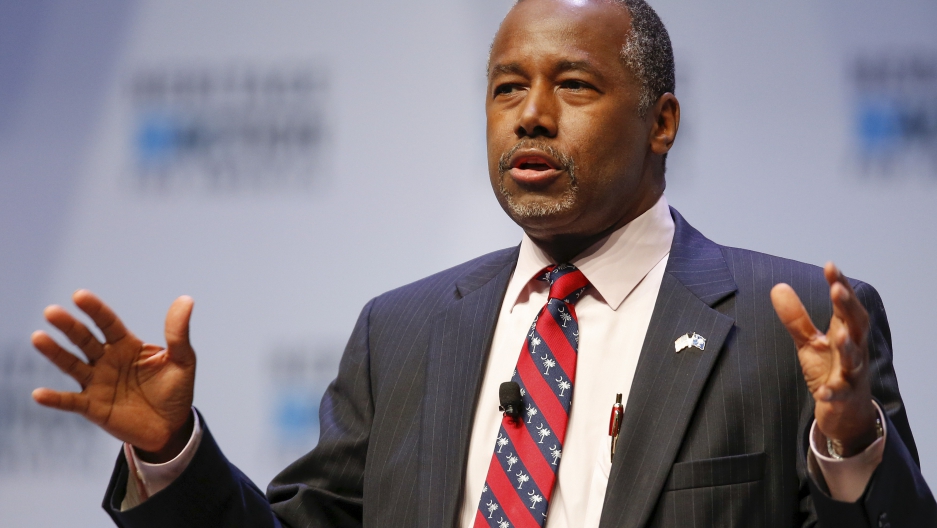 According to the US Constitution, in order for a candidate to qualify for the presidency, she or he has to be at least 35, a "natural born citizen" of the United States, and has to have lived in the country for at least 14 years.

As he told NBC's "Meet the Press" over the weekend, "I would not advocate that we put a Muslim in charge of this nation. I absolutely would not agree with that."

Carson did go on to say that Muslims should be eligible to serve in Congress, just not the White House, adding that Islam, as a religion, is "incompatible with the Constitution." Carson's remarks came after fellow candidate Donald Trump tolerated comments made by a town hall attendee who said that "radical Muslims" are a problem in the United States and described President Barack Obama as Muslim.

In light of such heated rhetoric, how are Muslim Republicans feeling about their party today? Randa Fahmy Hudome, a political consultant and a Muslim Republican who served as associate deputy secretary of energy in the George W. Bush Administration, suggested Carson read the Constitution.

“I also think it would behoove him to read all three holy religious books and their association or non-association with our political system here in the United States," Fahmy Hudome says.

Republicans and Republican leaners view Muslims much more negatively than they view other religious groups, according to a July 2014 report from the Pew Research Center. But Fahmy Hudome argues to the contrary, saying that Carson is an outlier among the GOP.

“I don’t think [there’s Islamophobia] within the party,” she says. “I think you have to be very careful when you coat the party with this. There are of course people like Lindsay Graham, Chris Christie and others who have not only rebuked these comments, but in the case of Chris Christie, has appointed loyal Muslim Americans within his administration.”

However, Fahmy Hudome acknowledges that, at least among some Americans, Islamophobia does exist. But she attributes those feelings of fear to a lack of understanding.

“I don’t believe it’s the majority of Americans,” says Fahmy Hudome. “I think a lot of education would go a long way. There is absolutely no question that 9/11 had a huge impact on this country, but to bring the words up of my old boss, President George W. Bush, Islam is a religion of peace.”

But Carson wasn’t really talking about Sept. 11, or terrorism on “Meet the Press.” Rather, he seemed to suggest that Islam runs contrary to American values and principles. A stance that Fahmy Hudome fundamentally disagrees with.

“I would highly recommend for him, if he really wants to understand the religion itself, to please study the Quran,” says Fahmy Hudome. “Thomas Jefferson had a Quran, which is in the Library of Congress. Keith Ellison, [a Muslim] representative from Minnesota, was sworn in on Thomas Jefferson’s Quran. I don’t know what [Carson] is talking about with respect to the tenets of the religion.”

In addition to reading the Quran, Fahmy Hudome says Carson should spend sometime looking at Article VI of the US Constitution, which states that “no religious test shall ever be required as a qualification to any office or public trust under the United States.”

“I’m glad that many members in the Republican Party have rebuked his comments,” she says. “I don’t think we should’ve ignored this. I think it’s a good idea to highlight it, and to highlight it in a negative sort of way — that there is a problem here with Dr. Carson’s understanding of not only the US Constitution, but also one of the great monotheistic faiths in the world. To call him out on it is absolutely the right thing to do, but I wouldn’t give it any more credence. Somehow he’s rising in the polls because of this statement.”