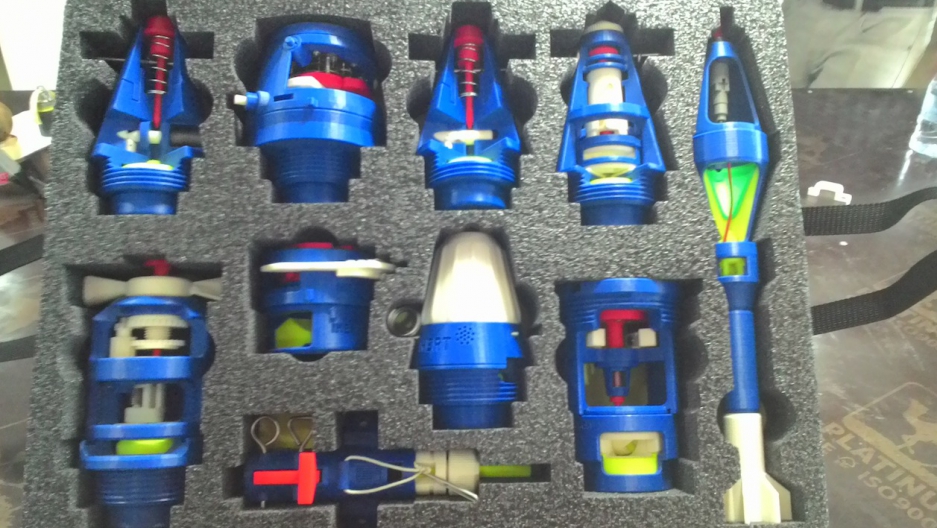 PHNOM PENH, Cambodia — Inside a design laboratory in Phnom Penh, 3D printers run day and night to create safe imitations of some of the world’s deadliest weapons.

The plastic results sit harmlessly on tables and shelves next to their inert — but real — counterparts. There’s a grenade, an M42 cluster munition and a PMN2 landmine, one of the most common found in Cambodia.

“This is a booby trap,” said engineer John Wright, handling a different item about the size of a flashlight.

He describes a hypothetical scenario in which a book has been placed on top of the trap to lure a potential victim.

“What it would do is as they picked up the book, this would fire,” he said, taking his finger off a red plastic part, causing a loud snap.

Releasing pressure sends a firing pin down the length of the device, which would in theory be attached to a detonation cord, setting off “something really big, some explosives," he said. "That would then go off.”

These 3D-printed fake bombs are changing the way demining is being taught around the world.

With $100,000 in seed funding from the State Department and a diverse cast of collaborators pitching in, the Golden West Humanitarian Foundation, a leading demining group with offices in the US and Cambodia, created what's called the Advance Ordnance Training Materials kit at its design lab in Phnom Penh.

The AOTM comes in a large suitcase that carries 10 3D-printed devices. Each model contains different arming and firing mechanisms that technicians venturing into the field need to understand.

The idea is to teach the principles behind why something explodes. As such, while they look recognizable as different types of bombs, they are not exact replicas in shape and size. For one thing they are built to be bigger. The lab has designed several additional devices for the next phase of the project, like the PMN2 landmine, meant to be more of a piece-by-piece clone.

3D-printed fake bombs are changing the way demining is being taught around the world.

3D printing has been used to make replicas of landmines before, but Golden West says what separates their models from predecessors is intricacy and detail. In the finished product, the anatomy of different bombs is completely on display, like a car with the hood up. Deminers will learn like mechanics.

The project has its roots in 2012 when an MIT professor named J. Kim Vandiver was visiting one of his graduate students in Phnom Penh. The student was working with Golden West on a method for removing fuses from unexploded bombs. Vandiver met with the group’s Cambodia country manager, Allen Tan. Over coffee Vandiver asked Tan, who is also Golden West’s director of applied technology, about possibly teaming up on something with the Singapore University for Technology and Design.

“I asked him to think of projects that SUTD students might contribute to. In the course of the conversation, we came up with the idea to 3D print training aids,” Vandiver said by email, explaining that MIT and the school in Singapore have an ongoing partnership. “SUTD had great 3D printing capability to test out the idea and interested students.”

Tan, a former explosive ordnance disposal technician who served in Iraq and Afghanistan with the US Army, said that 3D printing solves multiple problems of teaching the trade. First of all, it’s faster and more productive than injection molding. Small changes in design can be made quickly and precisely.

"It is clearer and easier to explain the mechanism and structure of ordnance to beginners with tangible 3D models than photos or drawings."

It’s important to have flexibility with production because of the limited global supply of non-hazardous ordnance. Even with what there is, transportation is a headache.

“There’s these pieces of inert ordinance that sit in EOD classrooms. And when you go into a new country, you cannot bring inert ordnance, ship it trans-nationally, because it’s considered a weapons system still,” Tan said in an interview. “I can’t get it on an airplane, I can’t ship it via FedEx.”

Finally, there’s the advantage of the visual and tactile training aid.

“Most of our best guys who work for us here in Cambodia, they didn’t get to go to high school. It was Khmer Rouge time,” Tan said, referring to the radical communist movement that killed nearly 2 million people from 1975 to 1979. “You are talking about a workforce that isn’t used to learning from books, learning from powerpoints.”

“The reason that EOD technicians or operators, the reason that they need to understand how bombs work is that they can make good decisions on how to deal with a bomb when they find one,” he added.

By “bomb” Tan means to imply a broad group of ordnance including cluster munitions, mortars, rockets, artillery and landmines.

About two years passed between the first brainstorming coffee session and the first sale. The break came when Tan was presenting the kits to an annual demining conference held in South Africa last year. Representatives from the United Nations approached him afterward, pre-ordering 10 sets for use with peacekeeping missions in Africa.

Since then, orders have come from PeaceTrees Vietnam; the International Committee for the Red Cross in Switzerland, which is using the kit in Laos; and, amazingly, the American military’s School of Explosive Ordnance Disposal.

“Which is the school I went to in the US Army!” Tan said.

The kits cost $7,000 — with discounts for NGOs. The money is supposed to be reinvested into the project, making it self-sustainable and not reliant on donors.

In Cambodia itself, the Japan Mine Action Service (JMAS), a nonprofit that trains local deminers, purchased two sets.

Masato Kon, a 58-year-old explosive ordnance disposal expert with JMAS and a former longtime member of the Japan Self-Defense Forces, said in an email that it was “love at first [sight]” when he saw the kit.

“I was impressed with the design,” he said.

They don’t just help his Cambodian students learn, they help him teach.

“It is clearer and easier to explain the mechanism and structure of ordnance to beginners with tangible 3D models than photos or drawings,” he said.