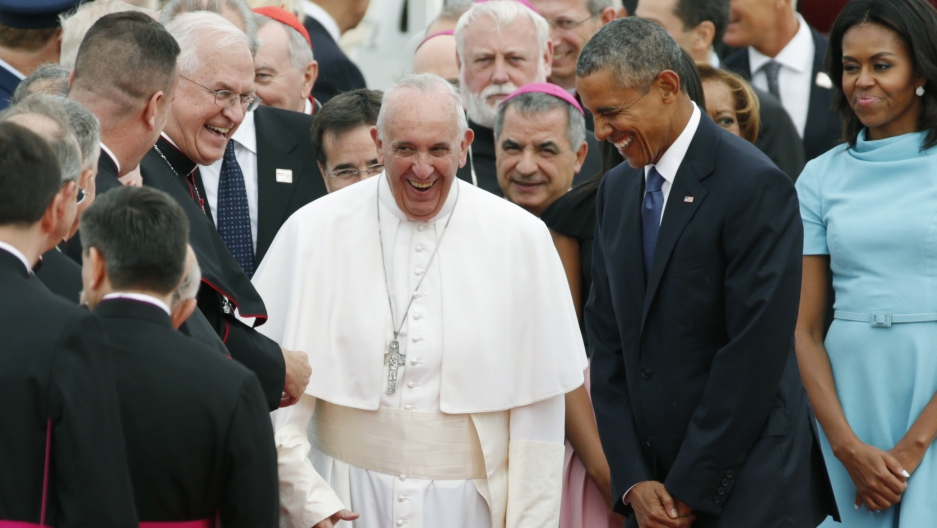 President Barack Obama and First Lady Michelle Obama welcomed Pope Francis at Joint Base Andrews in Maryland for the pontiff's first visit to the United States on September 22, 2015.

It was all smiles and breathless live TV commentary when Pope Francis stepped off the plane for his first-ever visit to the United States on Tuesday afternoon. But the glowing coverage of his stateside arrival masks the very serious challenge that Francis is presenting to the Catholic Church hierarchy.

The first pope from Latin America wants to remake the Vatican by refocusing the attention and energy of the people in charge toward what Francis sees as its core mission: “a poor church for poor people.”

Some of this is about small, symbolic actions by the pope. Compared to his predecessors, Francis wears more simple clothes. He lives in a more humble apartment at the Vatican. He speaks more directly — and often — to the public. When he goes out and about, the pope is driven around in a Ford Focus, not a luxury car. And he frequently meets in person with the poorest and most marginalized in society, wherever he travels.

But these seemingly small gestures are connected with something much more ambitious. Francis wants to transform the Vatican. To radically understate the scope of the challenge for Francis, this will not be easy.

“The Vatican is a state government and a church government,” writes Massimo Faggioli, Professor of Catholic Theology at Saint Thomas University in St. Paul, Minnesota. He goes on to describe Catholic headquarters in Rome as, “a cluster of churches, a monastery, a bureaucracy, a bank, a tourist site, a museum, a post office, a fire department, and even a jail.”

Faggioli’s point is that the Vatican is so big and unruly that it defies understanding. The institution is also very, very old.

“The structure of the central government of the church was created at the end of the 16th century,” Faggioli says. “And the structure that is the Vatican today is not very different from the one that was created in 1588.”

The fact that Francis is an outsider says a lot about his mission and motivation. In his previous position as archbishop of Buenos Aires, the man who would become Pope Francis travelled to Rome on official business. “He would come back [to Argentina] and he’d complain that he’d been treated by junior officials in the church as though he was altar boy and not a cardinal,” says Paul Vallely, author of Pope Francis: The Struggle for the Soul of Catholicism.

The Cardinals who elected this pope from the fringes of Catholicism in 2013 picked him specifically to clean up the mess left by his predecessors.

“He has a kind of freedom that he never had before,” Susan Ross of Loyola University’s department of theology says about the 78 year-old Pope Francis. “This is his last job. He’s not going to be moving on to another higher position.”

Reforming the Vatican Bank has been an early priority for Francis. “That’s a big deal and he’s got some opposition, because the Vatican is a place where there are all kinds of different groups, who have different interests, who have been operating this way for hundreds and hundreds of years,” Ross says.

Also on his plate, Francis is trying to tackle the issue of clergy sexual abuse. He is remaking the Vatican’s communications office. He has named a body of nine cardinals from different parts of the world to be top advisors. But Pope Francis wants church officials at all levels to do their part.

Francis has warned church leaders about the dangers of developing an overinflated sense of their own power and losing sight of the message of Jesus Christ. Sometimes this has not gone over very well with Catholic powerbrokers, says Father Jim Bretzke of Boston College's School of Theology.

One person of influence demoted by Francis is Cardinal Raymond Burke, the former archbishop of St. Louis. The two men would agree on matters of church doctrine, but their tones are dramatically different.

On the question of Catholics who've been divorced and remarried, Francis emphasizes mercy and understanding. And the pope has made it easier for them to return to the Church by speeding up the process for getting an annulment. Cardinal Burke, on the other hand, tends to stress the Catholic doctrine that marriage is forever and that remarried people are called by God to live a chaste life, as a brother and sister would do.

During a recent appearance at Franciscan University in Ohio, Cardinal Burke was asked how Catholics who’ve remarried might return to the Church. “We have the grace to live in fidelity to that marriage to which we are bound, and that would mean in the situation of those who are living in an irregular union a call to live a form of heroic chastity, but we’re quite capable of that,” he said.

This isn't just quibbling over esoteric church teaching. Faggioli says there is a conservative backlash brewing against Pope Francis. And he adds that US bishops are part of it.

“These bishops have in some cases just ignored the pope. In other cases, they have gone public and they have said, in code, but very clear, ... that they don’t consider this pope as their pope,” Faggioli says.

The underlying threat here is schism, Faggioli adds. If the pope doesn't accommodate this faction of disaffected conservatives, then they are threatening to split the Catholic Church. But Faggioli is quick to say that the hardcore traditionalists only make up a small minority of church leaders.

Francis is also immensely popular among Catholics, especially here in the US. So the pope might not be able to finish all of the reforms he wants in his lifetime. But Pope Francis has already put the Vatican on the road to change.